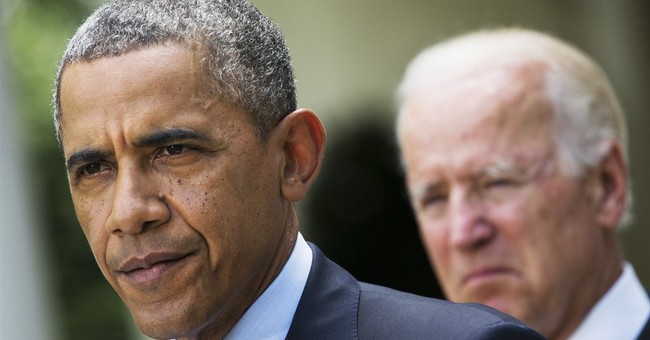 Why would anyone dislike Barack Obama? Could it be because of what he’s done in the White House? As you get a refresher on the national nightmare that has been Barack Obama’s presidency, keep in mind that the biggest difficulty in compiling it was limiting it to just 50 examples of corruption, dishonesty, and incompetence.

1) Because of Obama’s policies since he became President, 11,472,000 Americans have left the work force.

2) “Fewer Americans are at work today than in April 2000, even though the population since then has grown by 31 million.” — Mortimer Zuckerman

3) The number of Americans on welfare has hit record highs.

6) Our nation lost its AAA credit rating because Obama is spending so much money.

7) Not only was Cash for Clunkers a wasteful government program that “cost $1.4 million for every job it created and did little to reduce carbon emissions,” destroying the “clunkers” helped dramatically jack up the cost of used cars for the rest of the country.

8) After BP had a huge oil spill in the Gulf, Obama not only bungled the clean-up process, he slowed oil production from other companies that had done nothing wrong which led to higher oil prices.

9) Obama has helped drive up the cost of gas by blocking the Keystone Pipeline.

10) When he was running for office in 2008, Obama claimed that, “Under my plan, no family making less than $250,000 a year will see any form of tax increase. Not your income tax, not your payroll tax, not your capital gains taxes, not any of your taxes.” He lied.

11) Through 2013, the Obama Administration had imposed new regulations on businesses that cost 46 billion dollars a year.

13) When he was running for office, Obama called Bush “unpatriotic” for adding so much to the debt and promised to cut the deficit in half by the end of his first term. Yet, the national debt is up 7 trillion dollars since Obama became President. That’s more debt than all U.S. Presidents from George Washington through Bill Clinton combined.

14) Obama’s administration gave guns to Mexican cartels that were used to murder hundreds of Mexicans and border agent Brian Terry. The Obama Administration has refused to cooperate with the investigation or hold anyone accountable for that illegal behavior.

15) The NSA has spied on Americans under Obama.

16) Under Obama, the CIA spied on the Senate.

17) Obama’s campaign contributors at Solyndra were handed 535 million dollars of taxpayer money that the Obama Administration knew they would never be able to pay back before they gave it to them.

18) The IRS targeted Obama’s political enemies including Christian groups, pro-Israel groups, and most prominently, Tea Party groups. The Obama Administration has refused to cooperate with the investigation or hold anyone accountable for the illegal behavior.

19) Numerous donors to Mitt Romney were audited by the IRS after giving him large contributions.

20) When the EPA and IRS were asked to provide emails requested by Congress as part of an investigation into their illegal activities, they’ve claimed over and over again to have lost the information because of “hard drive crashes.” Given that it’s quite easy to back up a hard drive and that they’re required by law to retain that information, it seems likely that they’re habitually destroying evidence to hide their illegal activities.

21) Veterans received poor health care and even died because of the incompetence and cover-ups of Obama’s VA.

22) Even Barney Frank admits Barack Obama shamelessly lied to the American people to get Obamacare passed – and lie, he did. He promised that Americans could keep their insurance plans, that they could keep their doctors, and that Obamacare would save the average family $2500 per year. Not only were all of those lies, Obama knew they were lies when he made those promises.

23) Barack Obama has broken the law repeatedly by making at least 23 unilateral changes to Obamacare.

24) Obama has been illegally trying to force Christians to pay for abortifacients via Obamacare.

25) Obamacare has been a disaster that cost millions their insurance and sent health care costs spiraling into the stratosphere.

26) Obama is taking 700 billion dollars out of Medicare to put into Obamacare.

27) The website portion of Obamacare, healthcare.gov, was a non-functional disaster for months when it rolled out and Obama claimed he was completely unaware that there was anything wrong with it.

28) Instead of calming people down, Obama helped to turn Americans against each other racially be inserting himself into the Trayvon Martin case.

29) Obama created so much racial animosity by attacking the police when they had done nothing wrong in the Henry Louis Gates case that he had to have a ridiculous “beer summit” to try to undo the damage.

30) The Department of Justice failed to pursue a voter intimidation case against members of the New Black Panthers because they were black and liberal. Former DOJ official J. Christian Adams quit over the case and “accused his former employer of instructing attorneys in the civil rights division to ignore cases that involve black defendants and white victims.”

31) George W. Bush quit playing golf in 2003 because he didn’t want the mother of some fallen soldier to see the Commander-in-Chief out playing golf. He also said he thought playing golf during a war sent the wrong signal to the American people. Through June of 2014, Obama was up to 177 rounds and is on pace to play twice as much in his second term as his first term.

32) Obama chose tax cheat Tim Geithner to be his Secretary of the Treasury and then has had the audacity to spend his whole presidency pushing for higher taxes.

33) After promising to unite America when he was running for office in 2008, Obama has been the most hyper-partisan President in decades.

34) Despite the fact that Barack Obama claimed to believe that marriage should be between one man and one woman when he was running for President in 2008, his Department of Justice asked states attorney general to refuse to defend their states’ bans on gay marriage in court.

35) The Department of Justice has worked overtime to help increase voter fraud by fighting against voter ID. This is despite the fact that you need ID to buy alcohol, drive a car, fly on a plane or even to use Obamacare.

36) He’s the reason why countless Americans have been groped, molested and harassed by the TSA, even though agents never caught a terrorist sticking their hand down anyone’s pants.

37) He’s responsible for the dumbing down of our education system with Common Core.

38) We first landed on the moon in 1969, but because of Obama, we’re no longer even capable of going into space.

39) His servile bowing to other world leaders is embarrassing and un-American.

40) Barack Obama engaged in an illegal war in Libya without the permission of Congress that helped turn that country into an unstable basket case run by radical Islamists. How bad is it? America, Libyans and the rest of the world were better off with Muammar Gaddafi in charge. That’s how bad it is.

41) Radical Islamist Maj. Nidal Malik Hasan “described himself as mujahedeen” and yelled “Allahu Akbar” as he murdered 13 of his fellow soldiers at Fort Hood. The Obama Administration labeled that as "workplace violence" rather than admitting there was a terrorist attack on his watch.

42) He released 5 Taliban terrorists In exchange for deserter Bowe Bergdahl.

44) Russia annexed Crimea while Obama did nothing of consequence to discourage it from invading. That’s not a surprise for a President who is fond of throwing out “red lines” that don’t mean anything.

45) Obama’s premature pull-out in Iraq and foolish refusal to get a status of forces agreement in Iraq left the country vulnerable and led to the terrorists in ISIS taking over a large portion of that country.

47) Obama is threatening to bypass Congress and simply “legalize” millions more of illegal immigrants even though it’s illegal and unconstitutional and it hurts the American people and will further encourage even more illegal aliens to surge across the border.

48) The fence on our southern border was supposed to be completed by 2009. The Obama Administration has made it clear that it doesn’t intend to finish it during his presidency.

49) Barack Obama is deliberately creating a crisis on the southern border by refusing to deport illegal aliens crossing into our country.

50) For all practical purposes, Barack Obama has already unilaterally implemented amnesty in America because “at least 99.92% of illegal immigrants and visa overstays without known crimes on their records” aren’t being deported.