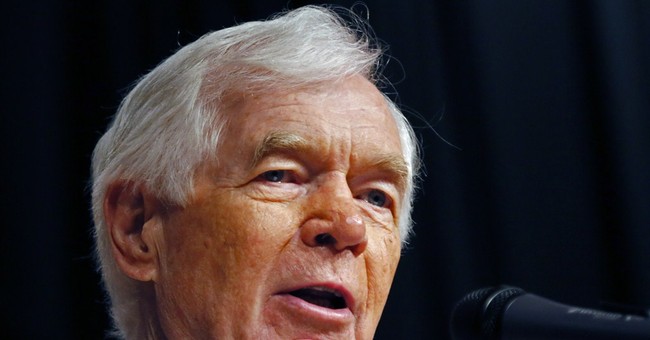 1) Thad Cochran is not mentally up to the job of being a senator anymore: There are certainly plenty of 76 year olds who can handle being a senator, but Thad Cochran isn’t one of them. The first indication that Cochran was slipping was that he wasn’t even capable of debating Chris McDaniel. If you’re not sharp enough to handle a debate any more, how can you handle being a senator? How far gone is Thad Cochran’s memory? After Eric Cantor’s major news-making loss, Cochran didn’t seem to know anything about the race even though he talked about it the day before. Worse yet, a half hour after he was interviewed by Atlantic reporter Molly Ball, Cochran had forgotten who she was.

Cochran didn't pose for any pictures during his brief sweep. As he made his way toward the exit, the senator held out his hand to me. I had met and interviewed him less than half an hour before.

"Hello, how are you doing?" he said with a kindly smile. "I'm Thad Cochran."

Running Thad Cochran for office when he’s just not up to the job any more mentally is not just unfair to the people of Mississippi, it’s exploitive. He’s just not mentally equipped to do the job anymore and it’s wrong that the people around him are pushing him to do it.

2) Thad Cochran has served long enough: Thad Cochran has been in the Senate since 1978. Isn’t 36 years in office enough for any one man? Especially since Cochran has been an undistinguished backbencher who is only noteworthy because he has been one of the biggest spenders on the Republican side? His defenders have tried to turn his love of pork into an asset, but what good is an earmarker to Mississippi in an era when earmarks have been banned?

3) Thad Cochran isn’t conservative enough to be a senator for a state like Mississippi: Mitt Romney beat Barack Obama in Mississippi by almost twelve points in 2012. Moreover, this is shaping up to be a wave year for the GOP. What that means is that barring some sort of Todd-Akin-style meltdown, the winner of this election is going to be elected to the Senate. Since that’s the case, why should Mississippi Republicans choose the less conservative candidate? McDaniel is a fire-breathing, Tea Party-friendly conservative who has been endorsed by Sarah Palin, the Tea Party Express, Mark Levin, Laura Ingraham, Freedomworks, the Club for Growth, the Senate Conservatives Fund and Right Wing News (I wrote the endorsement) among many others. On the other hand, Cochran has been running up the sort of ratings you’d expect to see from a Republican in a blue state. His lifetime ratings are 57% on the Freedomworks scorecard, 67% from the Club for Growth and 59% from Heritage Action. The ACU gave him a 60% rating in 2013. Those numbers would be perfectly acceptable for a Republican in, say Massachusetts or Connecticut, but they’re closer to the numbers you’d expect to see from a Democrat in Mississippi, than a Republican.

4) Thad Cochran is explicitly trying to get Democrats to put him over the top in the primary: Do you think the next Republican senator in Mississippi should be chosen by Democrats? Thad Cochran’s campaign does. His supporters ran an ad in a weekly newspaper patronized by Democrats touting his support of food stamps. Worse yet, Mississippi’s Democratic Party Chairman Rickey Cole says, "Large sums of cash are being passed around. These guys are old-school 'walking around money' vote buyers.” Do you think the next Republican senator of Mississippi should be determined by pay-offs to Democrat voters to participate in a Republican primary? If Thad Cochran were to win that way, do you think you could trust him the next time there’s a tough vote on Obamacare or gun control or would Thad Cochran sell conservatives out to please the Democrats who got him into office?

5) You can send a message to the Establishment by voting Cochran out of office: If you’re a conservative Republican in flyover country, like Mississippi, in a very real sense you have no government representation right now. The Democrats don’t care whether you live or die and unless you have deep enough pockets to funnel thousands of dollars into the pockets of politicians like Thad Cochran, he doesn’t care what you want either. The National Republican Senatorial Committee, a group that’s supposed to represent all Republicans, is smearing, attacking, and trying to destroy a Republican candidate, in a Republican primary, because Chris McDaniel actually cares more about representing the people of Mississippi instead of the lobbyists who give them campaign contributions. If someone like Ted Cruz or Mike Lee was in trouble during a primary, the NRSC would be cheering his opponent on because those candidates actually represent conservatives, not the go-along-to-get-along Republicans in D.C. that are happy to lose every fight for America as long as the New York Times doesn’t beat up on them too much and they get to keep their cushy jobs. Is that really all we can aspire to as conservatives? Politicians who don’t represent us and a party apparatus that takes our contributions and uses them to actively work against us? Chris McDaniel has a different vision of what the Republican Party should be doing in D.C.

The eyes of America will be on Mississippi tonight and the same establishment Republicans that supported Arlen Specter, Dede Scozzafava, and Charlie Crist will be rooting for Thad Cochran to win. They think nothing needs to change and the status quo is just fine. Chris McDaniel thinks we need more men like Ted Cruz and Mike Lee in the Senate and pledges to be one of them if the voters of Mississippi put him in office. Tomorrow, we go forward together as Republicans to put a candidate in office in November, but tonight we should make sure that candidate is someone who represents the people, not the lobbyists, the consultants and the GOP establishment.