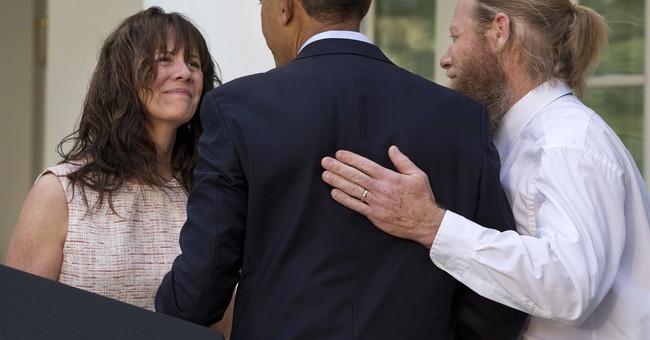 Barack Obama's tenure in the White House has been one of the low points in the history of our republic. It may seem melodramatic to compare the damage Barack Obama is doing to 9/11, Pearl Harbor, and the White House being burned during the war of 1812, but in a sense he's worse than any of those calamities because he's a purely self-inflicted wound. It's not a sneak attack from the Japanese laying us low this time; it's the man our nation willingly chose to lead us not once, but twice.

It's bad enough that Barack Obama is not qualified or competent to handle a job like the presidency, as his performance has proven again and again. Not only has he ridden the economy so deep into the ground that the percentage of Americans not working is at a 36 year high, he's piled on so much debt in such a short period that the destruction of our economy via bankruptcy and/or runaway inflation may be inevitable at this point.

Worse yet, Barack Obama has taken the position that he can rewrite any law he chooses, any way he chooses, for any reason he chooses. In other words, although Obama is not a dictator, he IS CLAIMING THE RIGHT TO EXERCISE DICTATORIAL POWERS for himself. This is extraordinarily dangerous to our republic. As Congressman Trey Gowdy has pointed out, if Obama claims he has the power to change Obamacare or illegal immigration law at his whim, why couldn't he do the same with election law? In other words, Obama has no more right to give illegal aliens work permits or delay congressionally mandated parts of Obamacare than he does to ban handguns by decree or reduce the number of electoral votes in Republican leaning states. That's why it's so incredibly dangerous to allow Obama to be "above the law." It's because the abuses committed tomorrow by Obama or even future Presidents are likely to build upon the ones that we're allowing to go unchallenged today.

The best way to check Barack Obama's power would be to impeach him. Despite the fact that Obama is much more deserving of impeachment than Clinton (perjury) or Andrew Johnson (who violated the Tenure of Office Act), it's unlikely that Obama will be impeached. Unfortunately, even if Republicans take back the Senate in 2014, there won't be enough votes in the upper chamber to get rid of Barack Obama. That's tragic, because for the good of country, Barack Obama deserves to be driven from office in disgrace.

1) For Illegally Changing Obamacare: It doesn't matter if the Affordable Care Act is called "Obamacare;" Barack Obama doesn't have the authority to unilaterally change the law. Changes to the law have to be made by Congress and then signed into law by the President. Barack Obama has broken the law repeatedly by making at least 23 unilateral changes to the law. Saying, "The Republicans won't work with us," or more disturbingly, "It's politically convenient," is not an excuse for overriding the Constitution of the United States.

2) Engaging In An Illegal War In Libya: While the President is the Commander-in-Chief, the Constitution gives Congress the ability to declare war. In the modern era, that has just meant an authorization of force from Congress, which Obama did not pursue. Additionally, we've tended to give Presidents the benefit of the doubt when American lives are at stake. However, in Libya, Obama didn't seek the permission of Congress and we had no national security interest in Libya. In other words, Obama's real justification for bombing that country and overthrowing its government was that HE FELT LIKE IT. Using the exact same precedent, the next President could bomb Mexico or Cuba without Congressional authorization. Incidentally, bombing either of those nations would probably make more sense than bombing Libya, although that's not saying much since our intervention there has been a complete disaster.

3) Lying To Sell Obamacare To The American People: When Barack Obama told the public if they liked their plan, they could keep their plan, he was lying. When he told Americans if they liked their doctor, they could keep their doctor, he knew it wasn't so. When he told Americans Obamacare would cut costs by $2,500 for the average family, he was deliberately misleading the public. For a President of the United States to PERSONALLY spend months telling deliberate falsehoods to the American people in order to convince them to support something as massive as a government takeover of the health care system is beyond the pale. If the wilful lies Barack Obama told to sell Obamacare don't merit impeachment, then there are no lies that a President could tell to the American people big enough to merit impeachment.

4) Violating Immigration Law And Illegally Implementing The DREAM ACT: Simply put, Barack Obama has ceased to enforce most immigration law. As Senator Jeff Sessions has noted, “at least 99.92% of illegal immigrants and visa overstays without known crimes on their records did not face removal.” In other words, we've already stopped deporting anyone other than SOME hardcore criminals and gang members. Additionally, when the DREAM ACT didn't make it through Congress, Obama simply implemented it ANYWAY. Not only is he explicitly telling illegal aliens they can stay in the United States, he's illegally giving them work permits that he has zero right to offer. Even if Congress is too split on the issue to unify and put a stop to what Obama's doing, that doesn't change the fact that it’s flatly illegal. If this is allowed to stand, tell me ANY LAW on the books that the President is obligated to enforce?

5) Releasing 5 Taliban Terrorists In Exchange For Deserter Bowe Bergdahl: Barack Obama was legally required to alert Congress 30 days before he released terrorists from Gitmo. Not only did he fail to do so, but more seriously he released five high level terrorists who he knew were likely to help kill Americans in the future. One of the terrorists has ALREADY SAID he intends to go back to Afghanistan to fight America. Barack Obama spent a lot of time bragging about getting Bin Laden, but he just released five Bin Ladens back into the world and a lot of Americans who didn't desert their country are likely to die because of it.