5 Ways Obama Has Destroyed The Rule Of Law In America 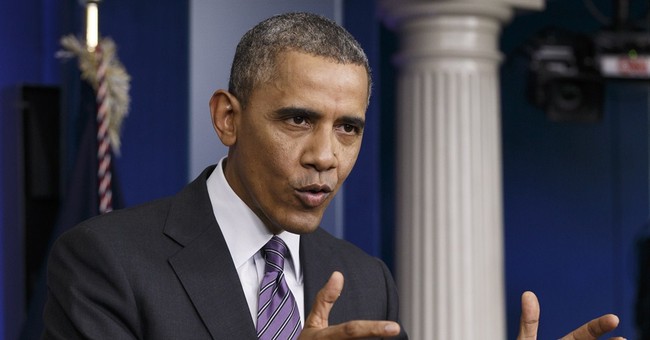 Tell me why any American should respect the law?

Is it because laws represent the will of the people? Not anymore. Today, the "law" is often summarily created from murky statutes by unelected bureaucrats who face no consequences for destroying people's lives.

Well, is the law at least equally applied? Absolutely not. Your political affiliation and how well connected you are to the regime in charge can have a direct bearing on whether you're prosecuted for breaking the law and how serious the penalty will be.

Respect for the law? Why should anyone respect arbitrary, immoral laws that aren't equally applied and don't reflect the will of the people? Under Barack Obama, the "law" in this country has become nothing more than whatever you can get away with and we're likely to feel the consequences of that for decades to come.

CARTOONS | Al Goodwyn
View Cartoon
1) Obamacare is whatever Barack Obama says it is: Barack Obama has no more legal right to change Obamacare all by his lonesome than Ted Cruz, Sarah Palin, or for that matter, Justin Bieber does. He simply doesn't have the legal authority to delay the employer mandate, delay taxes that are written into law, or give subsidies through federal exchanges to places where no state exchange was set up. Yet, Obama has delayed or changed the meaning of the law 19 times as if he were Kim Jong- un, as opposed to the President of a republic. 2) There are different laws for Tea Parties and the Occupy Movement: In city after city, the Occupy Movement was allowed to protest without expensive permits, participants were allowed to illegally camp and in some places they were allowed to break the law with impunity, which is why it's so staggering that there were still almost 8,000 arrests by the time all the dirty hippies abandoned their tents and rape-free zones to go home and take showers. Meanwhile, Tea Party groups across the country weren't given any similar breaks.

Tea party activists...accused officials in at least four cities of giving preferential treatment to anti-Wall Street protesters, and one group in Richmond is asking the city to repay $8,000 spent for permits and other needs. ...The Richmond Tea Party said Mayor Dwight C. Jones' administration sought permit fees, portable toilets and other demands for their events, but has given Occupy Richmond a free pass. The occupation has grown to a tent city, with a makeshift library, a volleyball net and a row of portable toilets. Jones has said that because he is a product of the civil rights movement he has allowed the Occupy protesters to remain since Oct. 17. "He's sympathizing with them," said Colleen Owens, a spokeswoman for the Richmond Tea Party. "We would never, as a tea party, have gotten away with not complying with the law." Tea party organizers had to buy liability insurance, hire police and emergency personnel and even keep a defibrillator on site, Owens said.

When groups all across the country are charged thousands of dollars for permits and liability insurance solely because of their political beliefs while other groups are given a free pass, there is no equality under the law. 3) Illegal immigration becomes legal: Admittedly, George W. Bush did a mediocre job of securing the border and enforcing immigration law. However, as a practical matter, illegal immigration isn't "illegal" anymore. Obama has illegally passed his own version of the DREAM Act, illegally handed out work permits to people who are breaking the law, and for all intents and purposes, has stopped detaining illegal immigrants who haven't been charged with other crimes. According to Senator Jeff Sessions , "at least 99.92% of illegal immigrants and visa overstays without known crimes on their records did not face removal." This is despite the fact that being here illegally is a crime and the people who broke that law did so knowing that the penalty was deportation. Tens of millions of immigrants have been welcomed to this country because as EVERYONE is well aware, we already have a "path to citizenship" for non- Americans and it's called following the law. 4) The IRS illegally targeted Tea Partiers: If the IRS ever comes after you, try refusing to hand over documentation for years and pleading the 5th Amendment and see what happens to you. If you're lucky, maybe you'll end up in the same minimum security prison that Wesley Snipes went to after some advisors convinced him he didn't have to pay taxes. Yet, after the IRS targeted Tea Partiers because they were conservative, tried to refer them for prosecution to the DOJ, and illegally released some of their information to outside parties, the IRS officials have been refusing to cooperate with the investigation. If the IRS wasn’t guiltier than Wesley Snipes, it would be cooperating just like the rest of us are forced to do when we face an audit. 5) Eric Holder encouraged state attorney generals to refuse to defend traditional marriage in court: In other words, if your state passes a ban on gay marriage, Holder wants state attorney generals to undercut the will of the people in order to further his political agenda. So according to Eric Holder, whether the people of a state get to have a representative in court depends on whether or not liberal attorney generals agree with their opinion or not. As John Suthers, the attorney general of Colorado, said:

I have been attorney general of Colorado for nine years, during which time the state has enacted laws that span the philosophical and political spectrum. I personally oppose a number of Colorado’s laws as a matter of public policy, and a few are contrary to my religious beliefs. But as my state’s attorney general, I have defended them all — and will continue to.

...Depending on one’s view of the laws in question, such a “litigation veto” may, in the short term, be a terrific thing; an unpopular law is defanged and the attorney general can take credit — indeed, he can be the hero to his political base and keep his political ambitions intact. But in the longer term, this practice corrodes our system of checks and balances, public belief in the power of democracy and ultimately the moral and legal authority on which attorneys general must depend.

....I fear that refusing to defend unpopular or politically distasteful laws will ultimately weaken the legal and moral authority that attorneys general have earned and depend on. We will become viewed as simply one more player in a political system rather than as legal authorities in a legal system. The courts, the governments we represent and, most important, the people we serve will treat our pronouncements and arguments with skepticism and cynicism.

When the "law" becomes little more than politics by other means, it deserves to be treated with the same rich contempt that we hold for politicians in this country. That has already started to happen, it's not good for the country, and much to the chagrin of the liberals who love this lawlessness as long as they're in charge, it's not going to end with Obama.