5 People Who Were Murdered For Being White in America 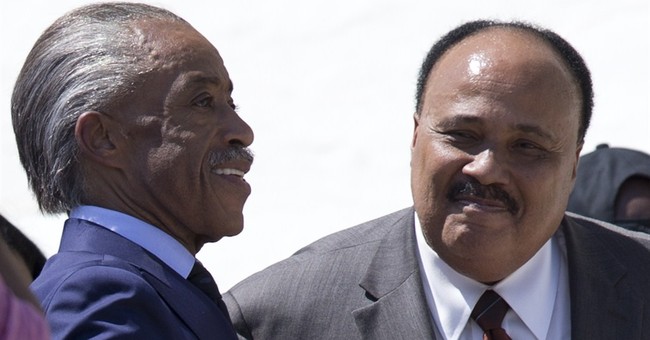 "Kill these racist honkeys, these crackers, these pigs, these pink people. It has been long overdue!" -- The New Black Panther Party

Liberals work hard to sow discord between black and white Americans, encourage divisiveness and discord at every turn, and regularly attribute run-of-the-mill political disagreements to racism. People like Jesse Jackson, Al Sharpton, Toure, Melissa Harris-Perry, Michael Eric Dyson, Tavis Smiley, and Ben Jealous make a living convincing black Americans that whites hate them and it's time they were called out on all of the lives they destroy in the process.

Not only are there a lot of decent black Americans who give up on having a good life because they're falsely convinced that the deck is stacked against them, but there are even people who die because the Left has embraced crying racism as a political tactic. The more the Left screams that everyone who opposes Obama is racist, that Republicans want to put black Americans back in chains, that conservatives want to lynch black Americans, that it's Birmingham, Alabama all over again, the more people on the fringes take liberals seriously and act out violently as a result.

Does anyone on the Left ever take responsibility for this? Do liberals ever say, "Gee, I guess I was wrong about that person being racist" or "Maybe we should tone down the rhetoric to make sure we're not getting people killed?"

If a few white people have to die so Al Sharpton can have a nicer house and Democrats can increase African-American turnout by 1%, that's a small price to pay.

Unless you're one of the people who ends up dead.

1) "I Hate White People!" (New York, New York, 2013): Earlier this month, Lashawn Marten yelled out, "I hate white people," and started punching people around him in New York City’s Union Square. One of the people he assaulted was 62 year old Jeffrey Babbitt, the sole caretaker for his sickly 92 year old mother. Babbit was initially walking around, but he slipped into unconsciousness. Babbitt went into a coma and was pronounced braindead. A few days afterwards, Babbitt died.

2) They wanted to rob a white person (Denver, Colorado, 2010): The Denver Crips gang had been specifically targeting white people to rob. They had robbed and attacked dozens of people because they were white. They went out specifically looking for another white person to rob and found 23 year old Andrew Graham. Graham, who had just been accepted into a Master's program for mathematical engineering, was walking home. Five members of the Crips followed him for two blocks before they confronted Graham, murdered him, and left his corpse lying in the front yard of a home in a residential neighborhood.

4) Shot dead for $10 and a sandwich (Wilmington, N.C., 2012): Four thugs were looking for white people to rob. After failing to break into a house and catch a woman they were stalking, they came upon a 20 year old college student, Joshua Proutley. They took ten dollars, a cell phone, and a sandwich before they shot him in the head and killed him.

Most Americans are good and decent people. However, that doesn't mean that the Left can relentlessly encourage racial division without consequence. The real danger of telling black Americans that those who oppose liberal policies secretly hate them is that some people may believe those lies and act on them. That sort of violence and hatred isn't good for anybody and liberals should stop tacitly encouraging it by treating allegations of racism as just another political tactic.