5 Ugly Truths Americans Will Have to Face 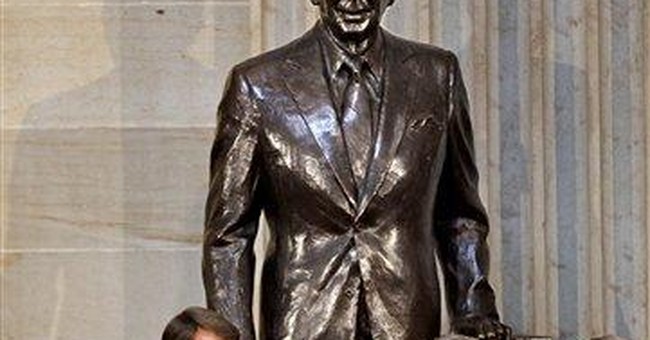 Still the Ghost pointed downward to the grave by which it stood.

"Men's courses will foreshadow certain ends, to which, if persevered in, they must lead. But if the courses be departed from, the ends will change. Say it is thus with what you show me!"

The Spirit was immovable as ever. -- Charles Dickens, A Christmas Carol

Even the United States of America is not immune to the rules of nature and commerce that govern other nations. Over the last few decades, our country has made some very foolish economic choices. It seems as if we have come to believe that the rest of the world is going to finance our government spending in perpetuity, even as it becomes clear that we have no intention of getting spending under control or paying back our debt. Because the wheels of history turn very slowly, we've gotten away with this for a long time, but as the baby boomers are starting to hit retirement age, the time to pay the piper is drawing nigh. In the next decade or two, we're likely to face a financial crisis more dire than any this nation has ever seen.

What is that going to mean in real terms? It means that barring an unforeseen miracle, our out-of-control spending is going to lead to some very painful decisions that will make a lot of people, including conservatives, very unhappy. What you're about to read are the ugly truths about what our behavior today means for our country's future.

1) Entitlements must be cut. By 2030, the Congressional Budget Office is estimating that Social Security, Medicare and Medicaid will make up 75% of our budget spending. In other words, unless we get a handle on entitlement spending, it will be impossible to get our deficits under control. That means the age eligibility for these programs must be raised and the amount spent per person will need to be dropped to try to close the gap between what we take in and what we pay out. Given how explosive this issue is politically, it's not going to be easy to accomplish. However, it's not realistic to believe that future generations of Americans are going to be willing to live like indentured servants for decades to support their own personal senior citizen who's lying around in a hammock somewhere, enjoying a 25 year long retirement. The sooner we start making changes, the easier it will be on everyone and the less shock there will be to the system when the inevitable changes start to take place.

2) Our military is going to weaken. By historical standards, the United States is not spending an extraordinary percentage of our budget on defense. However, we are spending an extraordinary amount of money on defense for a nation that's flat broke. Is this sustainable? Is China going to keep loaning us the money we need to keep our military going when it's the only thing standing between them and Taiwan? Are Americans going to keep spending billions to defend foreign countries that are ungrateful for our help when we don't have enough money at home? The answer to that question is, "No, we're not." That's a shame -- because the United States military is doing more to promote world stability than any other 20 nations combined, but we simply can't afford to keep it up. We'll be forced to cross our fingers, cut back on military spending, and hope that the world doesn't completely fall to pieces when the sheriff hangs up his guns.

3) Taxes are going up. Ronald Reagan was right when he said that, "The problem is not that people are taxed too little; the problem is that government spends too much." Unfortunately, we've allowed our government to spend so far beyond its means for so long that it's going to be almost impossible to close the gap by merely cutting spending. Taxes must go up on the rich, the middle-class, and, yes, even the poor. The whole idea that more than 40% of the population can avoid paying any income taxes at all when we're running trillion dollar deficits is sheer madness. Everybody is going to end up having to pay more -- and sickeningly, it won't even be for more services; it'll simply be to pay for what we've already spent.

4) Economic growth is going to stagnate. The bigger the government grows and the more it borrows, the less virile the economy becomes. We've seen this in Western Europe where policies -- of the sort the Obama Administration is now pursuing -- have led to the kind of perpetual sluggish growth and jobless rates we associate with economic downturns in this country. As the Congressional Budget Office has said:

Large budget deficits would reduce national saving, leading to more borrowing from abroad and less domestic investment, which in turn would depress economic growth in the United States. Over time, accumulating debt would cause substantial harm to the economy.

Less growth means less jobs, less prosperity, and handing future generations of Americans a country that doesn't hold as much promise as the one that we grew up in.

5) We will have a world where the United States isn't a super power. As the growth of the US economy slows, our military declines, and we become ever more dependent on the foreign powers that hold our debt, the United States will cease to become a super power. We won't have the cashflow to engage in another Marshall Plan, the manufacturing capacity to gear up as we did in World War II, or the dominant military needed to score decisive victories over our opponents. Certainly, the United States won't become completely insignificant, but Reagan's description of our nation as a "shining city" above the rest of humanity will no longer be true. Instead of being a colossus striding the globe -- we'll be like Russia, China, France, Britain, or Germany -- just one of many.

Are these events that "will be" or "may be?" If we depart from the course our nation is on, will "the ends" change for our nation or are we too far gone down the road to serfdom? Sadly, we've run so aggressively towards a socialist oblivion that our country may be on the backside of the mountain and unable to climb back to the top. Time will tell, but after all the privileges we've had growing up as Americans in this great nation, we have a solemn duty to bear whatever we must as a country to pass on the promise, the potential, and the dream of America to future generations.