The Top 7 Most Embarrassing Town Hall Moments for Democrats 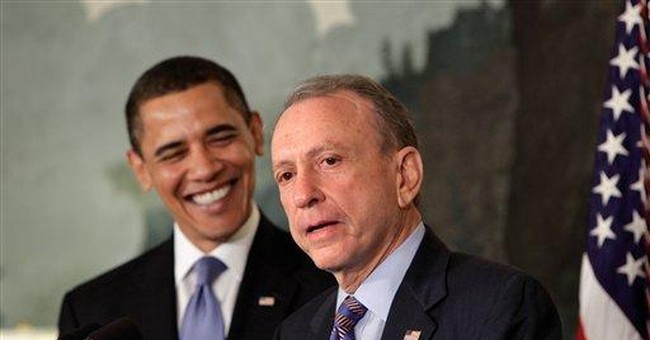 Sadly, for Republicans who have richly enjoyed watching Democrats getting a taste of their own medicine at town halls across the country, the August recess is winding down. Still, there are already so many memories. Humiliating, awful, scarring memories that are likely to still be haunting Democrats when November of 2010 rolls around.

7) Steny Hoyer vs. Don Jeror: Nancy Pelosi's condescending 2nd in command, Steny Hoyer, ran into a buzzsaw named Dan Jeror who, after emphasizing that he was a registered Democrat, got off one of the best lines of the summer so far:

"Why would you guys try to stuff a health care bill down our throats in three to four weeks when the President took six months to pick a dog for his kids?"

6) Carol Shea-Porter (D-NH) has a constituent removed from a town hall for asking her a question: Yes, Carol-Shea Porter actually had one of her own constituents, a retired policeman, hauled out of a meeting for daring to ask her a question. Apparently, he didn't have some sort of Willie Wonka style golden ticket that enables mere voters to speak in her presence. To add insult to injury, Carol-Shea Porter even made a snide comment as he was hauled away, "I do hope the movie theater can be a little quieter for you." It wasn’t that great of a line. She should have just gone full Mary Antoinette on the guy and cackled, "Let him eat cake" while she rubbed her hands together and sneered.

5) Steny Hoyer and Nancy Pelosi take to USA Today to call protesters "un-American": Remember when dissent used to be "patriotic" and how courageous it used to be to "speak truth to power?" Well, those were the old days. Now that the Democrats are in charge, it's "un-American" to "speak the truth to power" and doing so is probably an indication that you're part of a potentially dangerous "angry mob."

4) Nancy Pelosi says town hall protesters are "Astroturf":
Nothing cools down angry voters like having the Speaker of the House accuse them of being "Nazis. Oh, and what better way for the "Astroturf" to blend in with the grassroots than to carry a swastika to a meeting? That makes sense, right? At least Pelosi's moronic meandering did inspire Marine David Hedrick, during a memorable town hall rant, to quip: "If Nancy Pelosi Wants to find a swastika, maybe the first place she should look is on the sleeve of her own arm."

3) A liberal fakes an attack on the Colorado Democratic Party headquarters:
It's cheating a bit to include this one, but it's so good that it needs to make the list. After the Colorado Democratic Party headquarters was vandalized, "State Democratic Party Chairwoman Pat Waak initially blamed the vandalism on animosity surrounding the health care debate." Yet, it turned out that the perpetrator was a left-wing activist named Maurice Schwenkler. If this were the old Batman TV show and there were no such thing as Godwin's Law, Robin would be yelling out, "Holy Reichstag fire, Batman!"

2) Rep. Sheila Jackson Lee talks on the phone as a woman asks a question at a town hall event:
If a movie tried to show a member of Congress, at a town hall meeting, yapping away on a cell phone while her constituent was trying to ask them a question, people would pan it as unrealistic. Yet, Sheila Jackson Lee actually did it and then later explained, "In Congress, we have to multi-task." Gee, where do the American people get this crazy idea that members of Congress aren't listening to them?

1) Kenneth Gladney is beaten by union thugs:
A black man at a political rally was assaulted by white thugs who used racial epithets. The man was beaten so badly that he was forced to use a wheelchair and the response from liberals was...well, we're actually still waiting for a response. The conservative response was to start bringing guns to the town hall meetings. Since then, for the most part, the unions have decided to behave themselves. It's just more proof than an armed society is a polite society.