The Death of Racism: Four Ways The Word Is Being Worked To Death 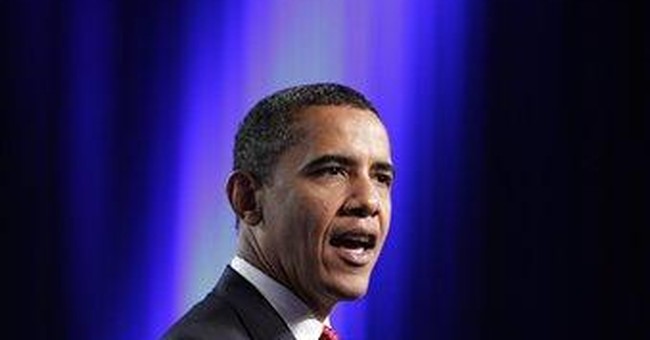 Although racism certainly exists in this country, it has become blessedly rare and marginalized. Some of the best evidence you can find for that is Barack Obama's election as President. Only in a country as colorblind as America could a black man easily win the Presidency when 75% of the votes were cast by white Americans.

Despite that fact, the cries of racism have become ever louder and more omnipresent since Barack Obama has been elected. Perhaps none of us should be surprised by that fact. After all, the racial grievance industry in this country still has bills to pay, the people who use racism as an excuse to explain their failures still need a scapegoat, and Democrats now have a ready-made excuse for every problem: "The President is black and so the people who don't agree with him must be racists!"

This is creating a self-defeating cycle for the Left. The more Obama fails, the more the Left shouts racism -- but, the more the Left shouts racism, the less effective it is. We've now already gotten to the point where playing the race card is starting to backfire or perhaps worse yet from the perspective of the people who rely on it so heavily, it is producing no reaction at all. Of course, it's no wonder that's the case when on a regular basis, people are crying "racism" over things like:

"So why the anonymity? Perhaps because the poster is ultimately a racially charged image. By using the "urban" makeup of the Heath Ledger Joker, instead of the urbane makeup of the Jack Nicholson character, the poster connects Obama to something many of his detractors fear but can't openly discuss. He is black and he is identified with the inner city, a source of political instability in the 1960s and '70s, and a lingering bogeyman in political consciousness despite falling crime rates." -- Philip Kennicott at the Washington Post

So, Joker make-up is now identified with "urban," which is connected with "political instability in the 1960s and '70s" except when Jack Nicholson is tied into it and then...aww, I give up. Reading this sort of nonsense tells you why so many people just roll their eyes when someone cries "racism" these days.

On Thursday's "Countdown" MSNBC's Keith Olbermann and his guest Janeane Garofalo defamed fellow citizens who attended the prior day's tea parties with the same vitriolic contempt.

Garofalo actually called party-goers "a bunch of teabagging rednecks," adding "this is about hating a black man in the White House. This is racism straight up." -- Newsbusters

Remember when all we heard from the Left was "Dissent is patriotism?" Now, the very same people are essentially saying, "Dissent is racism."

But what concerns me is when in some of those town hall meetings including the one that we saw in Missouri recently where there were jokes made about lynching, etc., you start to wonder whether in fact the word socialist is becoming a code word, whether or not socialist is becoming the new N-word for frankly for some angry upset birthers and others. -- MSNBC Host Carlos Watson

It's like Watson thinks that if he puts Missouri and lynching in close proximity to the word socialist, then ipso-facto, everyone is supposed to simply nod along when he starts to wonder whether socialist is the "new N-word." Incidentally, if a liberal has to point to an alleged "code word" to find racism, it's a pretty good indication that there isn't any present.

"According to research done by the Kaiser Family Foundation, low-income and uninsured Americans are far more likely to be members of a racial minority than Americans with insurance. This fact should surprise no one, and I'm sure that the teabaggers/birthers/cute-nickname-for-right-wingers showing up at town hall events are instinctively aware of how much universal health care will benefit communities of color. And they're not having it." -- Amanda Marcotte

Oh, yes, that's what the opposition to health care is all about: racism! There are actually legions of conservatives, all of whom claim to oppose socialized medicine because it will cause costs to skyrocket and will destroy the quality of health care in this country -- who really know it will work and just don't want black people to get health care. Sure, that's completely plausible -- well, maybe if you've been hit in the head with a heavy object enough times.

Once again, racism does exist and should be condemned. Moreover, some people who feel like they're being discriminated against are right. Some people who point to what they see as "racism" are spot-on about it. When they are, whether the person engaging in it is man or woman, white or black, conservative or liberal -- we should call them on it.

However, the vast majority of people crying "racism" are doing so simply because they believe that they'll benefit from it. Maybe they want sympathy, money, a handy excuse for their failure -- or in the case of the liberals, just to get their way. We've already gotten to the point where liberals are for all intents and purposes saying that trying to stop Obama from implementing his agenda is racist. Democrats have become so used to reflexively crying "racism" every time there's a conflict between a black Democrat and anyone else that they've essentially gotten to the point where they can only see two options: people who agree with the President and racists. Over the length of Obama's presidency, that's likely to destroy the effectiveness of the false cries of racism that the Democrats have used so ably in recent years. Given how things have gone so far, that may be one of the few good things to come out of Barrack Obama's presidency.