The Top Six Problems With the Stimulus 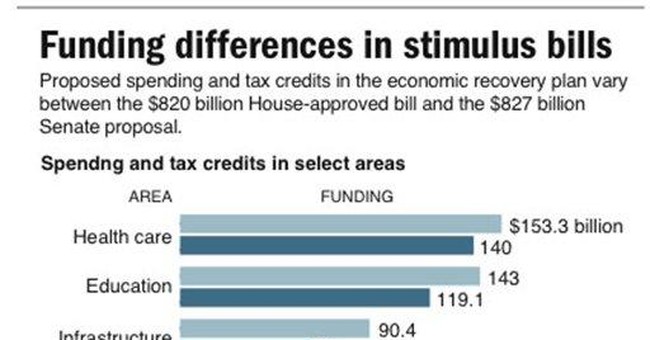 1) First of all, it's very debatable whether stimulus bills work at all. As Walter Williams has pointed out,

"In stimulus package language, if Congress taxes to hand out money, one person is stimulated at the expense of another, who pays the tax and is unstimulated. A visual representation of the stimulus package is: Imagine you see a person at work taking buckets of water from the deep end of a swimming pool and dumping them into the shallow end in an attempt to make it deeper. You would deem him stupid. That scenario is equivalent to what Congress and the new President proposes for the economy." -- Walter Williams

2) According to the Wall Street Journal, there is very little actual "stimulus" in the stimulus bill,

"In selling the plan, President Obama has said this bill will make 'dramatic investments to revive our flagging economy.' Well, you be the judge. Some $30 billion, or less than 5% of the spending in the bill, is for fixing bridges or other highway projects. There's another $40 billion for broadband and electric grid development, airports and clean water projects that are arguably worthwhile priorities.

Add the roughly $20 billion for business tax cuts, and by our estimate only $90 billion out of $825 billion, or about 12 cents of every $1, is for something that can plausibly be considered a growth stimulus."

3) Even if you set aside #1 and #2, a significant percentage of the spending in the stimulus bill doesn't occur for two years.

"Although the argument for quickly passing the $800-billion-plus stimulus bill now before Congress is that pumping money into the economy immediately will spur economic growth and create jobs, almost half of the new spending—as opposed to tax cuts—being proposed in the bill would not be spent until at least two years from now, according to an analysis published by the Congressional Budget Office."

How is spending that's not going to occur for two years supposed to stimulate the economy today and prevent those 500 million lost jobs per month that Nancy Pelosi told us about? If Barack Obama really believes what he says and thinks that, "A failure to act, and act now, will turn crisis into a catastrophe," then why isn't the spending frontloaded into this bill?

4) Even the "non-partisan" Congressional Budget Office, which many Republicans consider to be tilted to the left, is saying that this bill is worse than doing nothing over the long-haul.

President Obama's economic recovery package will actually hurt the economy more in the long run than if he were to do nothing, the nonpartisan Congressional Budget Office said Wednesday.

CBO, the official scorekeepers for legislation, said the House and Senate bills will help in the short term but result in so much government debt that within a few years they would crowd out private investment, actually leading to a lower Gross Domestic Product over the next 10 years than if the government had done nothing.

CBO estimates that by 2019 the Senate legislation would reduce GDP by 0.1 percent to 0.3 percent on net. [The House bill] would have similar long-run effects, CBO said in a letter to Sen. Judd Gregg, New Hampshire Republican, who was tapped by Mr. Obama on Tuesday to be Commerce Secretary.

How much sense does it make to push through a bill designed to "stimulate" our economy when we know that it will actually reduce economic growth?

5) Despite the initial claims that this bill would be "targeted, timely, and temporary," the Democrats have moved quite a few regular budget items into the stimulus package. Republican Senator Jeff Sessions says this was done in order to avoid the normal budgeting process and that the new baseline for these programs will be the amount that they were allocated in the last budget plus the amount the programs receive in the stimulus package.

In other words, the stimulus package seems likely to add hundreds of billions of dollars, every year going forward, to the budget deficit. No wonder Barack Obama is predicting that America will run "trillion-dollar deficits for years to come" under his "leadership."

6) The sheer cyclopean size of this stimulus package, which comes up to roughly 1.2 trillion dollars when you add in the interest over 10 years, is difficult for most people to comprehend. How big is it? As Mitch McConnell said,

"If you started spending the day that Jesus was born and you spent a million dollars every single day, you still wouldn't have spent a trillion dollars."

Those were momentous events in our history. Going to the moon, rebuilding Europe, fighting wars -- meanwhile, ten years from now, we'll have very little to show from this stimulus plan other than a considerably larger national debt and slower economic growth. In other words, all hyperbole aside, this may very well be the single least effective, most wasteful, most costly piece of legislation in all of recorded human history.