Why the Liberal View of Government is Wrong 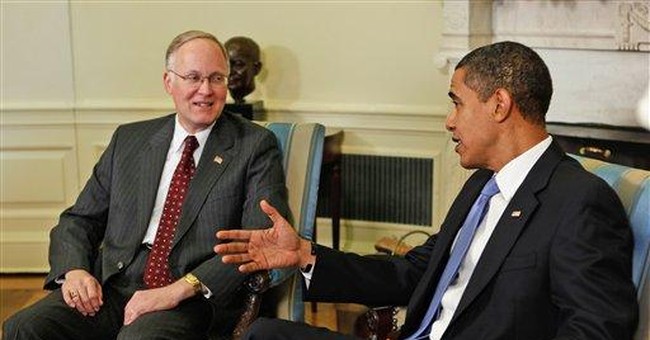 Liberals view the government as a force for good that should be used at every possible opportunity to reorder people's lives. This is an outgrowth of the liberal belief that most people are stupid and unable to ascertain what's in their own best interests without the intercession of their superiors (liberals) to show them what's best. That makes government extraordinarily handy to liberals because they can use the power of government to force people to give up their money, force people to do things they don't want to do, and to try to reshape society into the utopian vision they have of how the world should work.

On the other hand, conservatives view the government as a necessary evil that should generally be used as sparingly, judiciously, and reluctantly as possible. This is not because conservatives believe people are angels, but because we believe Adam Smith was correct when he said, "It is not from the benevolence of the butcher, the brewer, or the baker that we expect our dinner, but from their regard to their own interest."

Furthermore, the conservative view says that the government is slow, inefficient, inordinately expensive, error-prone, and as likely as not to create problems worse than the ones it tries to solve with its bungling efforts. Hence Ronald Reagan's classic line, "The nine most terrifying words in the English language are, 'I'm from the government and I'm here to help.'"

These contrasting views have a great deal to do with why liberals and conservatives seldom see eye-to-eye on a policy issue.

A liberal looks at the potential good he believes can come from forcing a business owner to comply with a new regulation and supports it. A conservative worries about the cost of the regulation, the unintended effects, and the cumulative expense and time of many regulations and opposes adding yet another burden on a small business owner's shoulders.

A liberal loves the idea of forcing businesses to pay workers more than what they're worth through the minimum wage. Conservatives see the minimum wage as more meddling in the free market that will have negative consequences. If you force the business owner to overpay, he will surely change his behavior as a response. Maybe he'll hire less people. Maybe he'll have less money to spend on equipment. Maybe he won't be able to give out Christmas bonuses to his best performing employees. Whatever the case may be, assuming a politician in DC can micromanage the salaries of a business owner better than he can seems to be incredibly arrogant.

A liberal looks at a failing business, usually one that has given quite a bit of money to liberal politicians, and wants to play the hero by "bailing out" that company with taxpayer money. That politician is making a determination that he is wiser than the market and can better decide whether a particular business should remain open. A conservative looks at the same company and declines to bail it out on the grounds that if it were a viable business over the long-haul, some private company would have already loaned it the money it needs. Furthermore, when a company goes out of business, its more successful competitors can then swoop in, buy up its assets, and put those resources to better use.

Examples like these could fill a dozen books, but they all come down to a collision between two world views: is government a necessary evil or is government a force for good?

Just to name perhaps the two most prominent examples for the "government is a force for good" way of thinking: Social Security and Medicare are certainly popular government programs, so popular in fact, that few conservatives would be willing to support ending them. However, the financial strain being created by those two programs is on track to bankrupt our country in the next 20-30 years. If that turns out to be the case, then all the good done by those programs will be very small indeed compared to the cataclysmic damage that they'll do to our nation. Now, is it possible that those horrifying consequences won't come to pass? Certainly, but the nation will have to be practically sliding into the abyss for the politicians in DC to risk seriously tampering with those programs. Thus we cannot, and should not, ignore the tremendous harm that even wildly popular government programs can potentially do to our country.

On the other hand, the best evidence for the "government is a necessary evil" school of thought is that almost every extremely serious problem our country has dealt with in the last 75 years has had at its root, actions taken by the government.

The Depression? It was an economic downturn turned into a lingering disaster by the government policies designed to fix it. Gas lines during the Carter years? That was caused by government price controls. Staggering out-of-wedlock birth rates? Welfare and no-fault divorce laws created that issue. A flood of illegal aliens? The government failed to secure the border and deliberately refused to enforce the laws. The mortgage crisis? The government forced businesses to give loans to bad risks. The deficit? The government spends too much year after year after year. It goes on and on, but you ALWAYS, ALWAYS, find government actions at trouble's core.

So, how does the government get by with this? By pointing out the good a policy does, or more often than not, the potential good it can do, while studiously ignoring the costs. As Thomas Sowell is wont to say,

"Killing the goose that lays the golden eggs...is a viable political strategy, so long as the goose doesn't die before the next election and politicians can avoid leaving their fingerprints on the weapon."

That's not to say that we should NEVER rely on government. If that were the case, it would simply be called an "evil," not a "necessary evil." Sometimes there are tasks that the government is best suited to take on: defending our nation, delivering mail, building and maintaining roads, regulating industries, breaking up monopolies, etc.

But even in these limited areas, the government often does a poor job. We have bridges falling down because of poor maintenance. Our government does a mediocre job of securing our borders. The customer service at the post office, DMV, IRS and other government agencies is often poor, and regulations are often written to benefit companies that give the most campaign contributions to the government.

There's a lesson there for those that are willing to hear it. Whenever someone claims that government is the answer, your antenna should go up, you should make sure your wallet is safely secured, and you should evaluate every statement that person makes as if it were made by a professional con artist serving twenty years in a federal penitentiary. Then, and only then, are you ready to decide if the government should become further enmeshed in the lives of Americans.