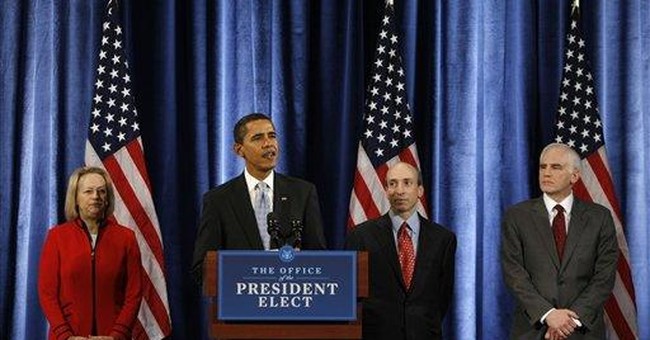 "I ask the three of you, how can we, as symbolically the children of the future president, expect the three of you to meet our needs, the needs in housing and in crime and you name it." -- A question from Denton Walthall AKA "The ponytail guy" at a 1992 presidential debate

In America, we come from pioneer stock. Our ancestors explored, conquered, and civilized a continent one wagon train and settlement at a time. They crossed hundreds of miles of hostile territory, risked starvation, murder by Indians, and dying alone in the wilderness to try to carve out a decent living for their families.

That same ferociously independent spirit was what inspired our ancestors to throw off Britian's shackles and forge America into the greatest economic and military power the world has ever seen.

These accomplishments were because of the decency, work ethic, and self-reliance of the American people, not because of the greatness of our leadership in Washington, D.C. The Founding Fathers understood that, which was why they considered government to be a necessary evil that was to be hemmed in, contained, and bound at every opportunity.

The idea that the American people are "symbolically the children of the future president" would have not only appalled the Founding Fathers, it would have insulted them.

It should insult us, too. We now live in a country where the government educates us, gives us food stamps and school lunch programs when we're hungry, gives us money when we lose our jobs, frets constantly about differences in free market salaries, orders home loans to be given to people who can't afford them, bails out failing companies, and provides for our retirement.

Are those all bad things? No. Should we immediately roll all those policies back? No. But, what we should do is recognize that it is extremely unhealthy for the country to have the government doing so many things that people used to do for themselves -- for the same reason it's unhealthy to have thirty-year old men still living with their parents.

With adults, we recognize that it's a good idea for people to cut the apron strings, leave the nest, and live their own lives, but no American can get away from the all-smothering love of "mother government."

She's going to hover over you, dictating everything from where you go to school, to how much of your own money she's going to let you keep, to your retirement planning. If you have the temerity to complain about any of this and ask to be left alone, you're told "Mama knows best" and accused of being selfish, foolish, or unrealistic to think you could do a better job of planning your own life than "Mama."

Meanwhile, the list of things "Mama" wants to control seem to be rapidly and endlessly expanding, even down to the minutia. The government wants to choose whether you watch analog or digital TV. They're levying special taxes on downloaded music, movie tickets, soda, and massages. They're even demanding that you get rid of the incandescent lightbulbs in your house, apparently because that's too big of a decision for you to make on your own. They're even thinking about deciding whom you get to listen to on the radio via the Fairness Doctrine, putting a GPS tracker in your car so they can tax you for driving at the "wrong" time of day, and actually controlling the thermostat in your house.

It doesn't matter whether we put Democrats, like Bill "The era of big government is over" Clinton, in office or Republicans, like George "When somebody hurts, government has got to move" Bush, into office -- the players, the party, and the rhetoric may change, but the overweening mothering masquerading as government continues to worsen. We have got to find a way to change that trend or eventually even the descendants of pioneers, revolutionaries, and explorers will become a nation of unambitious, overtaxed loafers living in Mama Government's basement.