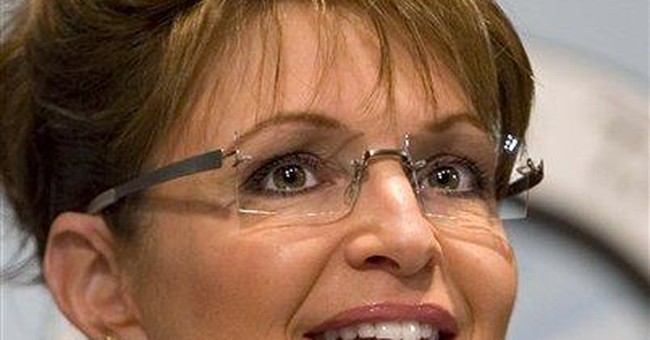 When Sarah Palin was selected as John McCain's VP pick, it caught the mainstream media completely flatfooted. Most of them acted as if they'd never even heard of her, despite the fact that conservative bloggers had already selected her and Mitt Romney (they tied) as their most desired VP picks for John McCain.

Moreover, the reaction of conservatives to Sarah Palin, while not quite as rapturous as the liberal reaction to Barack Obama, is surprisingly strong and positive -- and again, the press seems puzzled. Why in the world are conservatives so enthused about someone who has never done Meet the Press or been to a single Washington cocktail party?

So, in an effort to help out our elitist liberal brethren who've been trying in vain to figure out what's so appealing about Sarah Palin, I decided to put together a little list that explains why conservatives love Sarah Palin so much.

#1) She's conservative: John McCain is more of a moderate than a conservative and there were genuine concerns that he might take someone like Joe Lieberman as his VP. So, getting a rock-ribbed conservative like Palin instead was like expecting a pile of horse flop for Christmas and actually getting the pony instead.

#2) She's a reformer: In a time where people are sick to death of the corruption and waste in D.C., an Alaska governor with a reputation for slashing wasteful spending and taking on corruption -- even in her own party -- is very appealing and has the added benefit of doubling down on McCain's strengths.

Just to give one great example of what she brings to the ticket, Barack Obama and Joe Biden both voted more than once to support the ultimate wasteful earmark, the Bridge to Nowhere, even after that bridge had become a national symbol of wasteful spending. On the other hand, despite what some liberals are now claiming, it was Sarah Palin who finally sent the Bridge to Nowhere tumbling down.

#3) She is the right person at the right time: You could make an argument -- and a fair one -- that Sarah Palin doesn't have enough experience to be the VP. However, what you cannot do is make a fair argument that Sarah Palin isn't qualified to be VP -- while claiming that Barack Obama, who is less qualified to be in the White House than Palin, is ready to handle the presidency. In other words, if Barack Obama were a little better qualified, he'd almost be ready to handle the Vice-Presidency in a McCain administration.

That being said, it doesn't really matter how much experience the VP has if the ticket doesn't get into office. On that score, Sarah Palin appears to be the single best person John McCain could have picked to improve his chances of getting elected. In one fell swoop, McCain energized conservatives, perked up Republican fundraising, increased his appeal to disaffected Hillary voters, got more moderates on board, and burnished his "maverick" credentials.

Compare that to Obama who chose...wait, has he chosen a VP yet? I don't remember...oh, yes, he took Joe Biden who was last seen telling people Hillary may have been a better pick for Obama. Awww, say it ain't so, Joe!

#4) A lot of people can relate to Palin: Americans tend to like politicians who they think are "like them." Given that most D.C. pols tend to be rich Ivy League lawyers who've spent most of their life in a bubble surrounded by other political junkies, they don't really fit the bill.

On the other hand, Palin comes across as much more of a self-actualized version of a regular person than most politicians. She isn't a lawyer, she didn't go to Yale, and she isn't rich. However, she's an attractive woman with a big family and a cool husband. She's a hunter and she started out as a PTA mom and worked her way up to the governorship of Alaska. I think for the average person, that's a much more comforting picture than, say -- got a law degree, served as a community organizer, hung around with Jeremiah Wright, Bill Ayers, and Tony Rezko -- then voted the liberal line in the Senate for two years before starting a run at the presidency.

#5) She is from outside of Washington: Given that the American people are deeply unhappy with the performance of Congress, it's ironic that 3 of the 4 candidates in the race serve in that same unpopular Congress. So, is it really surprising that a governor who hasn't been serving in the D.C. cesspool seems like a breath of fresh air?

#6) She's our chance to be "first:" Liberals love nothing better than to play identity politics and have attempted to define womanhood in a way that makes it impossible for conservative women to be feminists. Along the same lines, they regularly claim that conservatives are sexists almost by default.

So conservatives -- who don't believe we're sexist at all and think Sarah Palin is much closer to the feminine ideal than Gloria Steinem or Naomi Wolf -- love the idea of walking the walk on this issue while liberals only talk the talk. Hillary may have gotten 18 million votes, but that apparently wasn't even enough to qualify her to be vetted by Barack Obama while it's the Republicans, whom Democrats mocked as a straight white male party, that have a woman on the ticket.

#7) The Left’s hate and fear of Sarah Palin: From practically the moment John McCain selected Sarah Palin, the American Left (the mainstream media included) went absolutely insane and began an unprecedented smear campaign against her. Dozens of bizarre rumors sprang up overnight. Liberals launched crude, condescending, sexist attacks against her; they went after her children. Numerous lies and fake scandals sprouted up each day; there were false pregnancy rumors, faked bikini shots. The venom was almost unbelievable, even after hearing comparisons between George Bush and Hitler for eight years.

Conservatives were outraged to see an avalanche of blatantly unfair attacks launched not just at one of their own, but at a conservative woman, and it caused the Right to rally behind her. There are undoubtedly countless voters, myself included, who will be voting for the Republican ticket in November as their own personal way of paying back the Left for their over-the-top attacks.