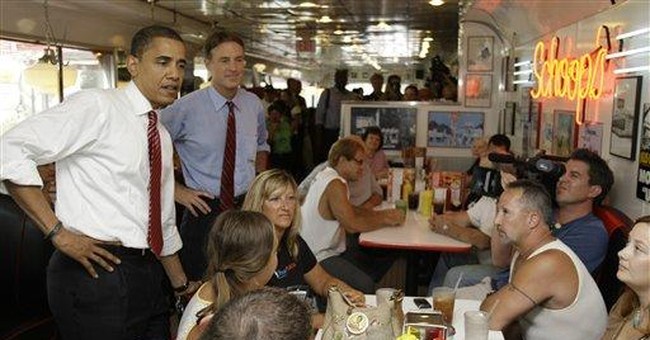 "I have become a symbol of the possibility of America returning to our best traditions." -- Barack Obama

Liberals are almost always insufferably arrogant. It sort of goes with the territory. After all, if you believe that we have to throw religious customs, hundreds of years' worth of societal traditions, and the parts of the Constitution you disagree with into the wastebasket based primarily on your "feeling" that they're antiquated or no longer necessary, then you almost certainly must have an ego the size of a small planet.

That brings us to Barack Obama, who, even amongst liberals, is notorious for being full-of-himself. Conservatives who have pointed this out have been recently accused, rather uncreatively I might add, of calling Obama "uppity."

The whole idea and concept of a black man being "uppity" or acting above his station by doing things white people do...didn't that go out in like the fifties? I was born in the seventies, grew up in the heart of the deep South, in small town North Carolina, and I don't ever recall someone referring to a black man as "uppity." Not to say that there weren't racists in that town (There were) or that no one ever thinks like that anymore (There probably are still a few Robert Byrds out there), but if the Democrats have to reach that far into obscurity to try to keep people from talking about Obama's arrogance, then they must really believe that Obama's tendency to turn his nose up at the Hoi-Polloi is a weak point. Incidentally, they're right -- it is.

The American people don't like snobbish political hacks with delusions of grandeur, like Obama, and the more they get to know him, the less they will like him personally.

Granted, it must be pretty heady stuff for Obama to have teenage girls fainting while he speaks and 200,000 Germans chanting his name. Of course, the average rock star has had those same sort of experiences and most of them are still grounded enough to avoid saying something as conceited as, "We are the ones we've been waiting for." On the other hand, Obama would make a great rock star, wouldn’t he? He'd probably be one of those rappers who repeats his own name 50 times in a three minute long song.

It's that kind of arrogance that makes lines like this one just seem to naturally roll off his tongue,

"You got into these small towns in Pennsylvania and, like a lot of small towns in the Midwest, the jobs have been gone now for 25 years and nothing's replaced them. And they fell through the Clinton Administration, and the Bush Administration, and each successive administration has said that somehow these communities are gonna regenerate and they have not. And it's not surprising then they get bitter, they cling to guns or religion or antipathy to people who aren't like them or anti-immigrant sentiment or anti-trade sentiment as a way to explain their frustrations."

That quote is a window into Barack Obama's world. There are the enlightened few, like Barack Obama, and then there are the "little people" who are bitter and cling to "guns," "religion," or "anti-immigrant sentiment" because their primitive brains have left them frustrated and unable to see the big picture. The "bitter people" need a man like Barack Obama in the White House, a Harvard grad who enjoys arugula and basking in the limelight in Europe, to make the decisions for them that tragically, they're just not learned enough to make on their own.

The deep irony here is that many of the frustrated "bitter" people that Obama peers down on from on high are just as qualified to be President of the United States as he is. Obama has never served in the military, in the House, or as a governor. He has never run a business, was just elected to the Senate in 2004, and has had exactly one hard-fought political victory in his entire career (against Hillary Clinton). So, who would be more qualified to be President: Obama or, let's say, a guy who served a couple of tours in the military, got out, started his own successful small business, and has served a couple of terms on his local city council? I have few doubts that the city councilman would be far more in touch with the real world and more competent to lead the country than someone who was so haughty and dare I say, messianic that he proclaimed,

This guy has never run a business, run a state, or served in the military, but he's going to slow the rise of the oceans and heal the planet? There are people locked away in rubber rooms, drooling on the floor and talking to tiny pink elves, who are less delusional than Obama.

......And that is ultimately the problem with having a President who combines limited experience with towering arrogance. Putting Barack Obama in charge of the United States would be like making a cocky high school class President the new CEO of Wal-Mart. Not only would he not know what to do, he wouldn't know what not to do, or even that he doesn't know the difference.