John Hanlon
|
Posted: Mar 25, 2016 10:43 AM
Share   Tweet
The opinions expressed by columnists are their own and do not necessarily represent the views of Townhall.com. 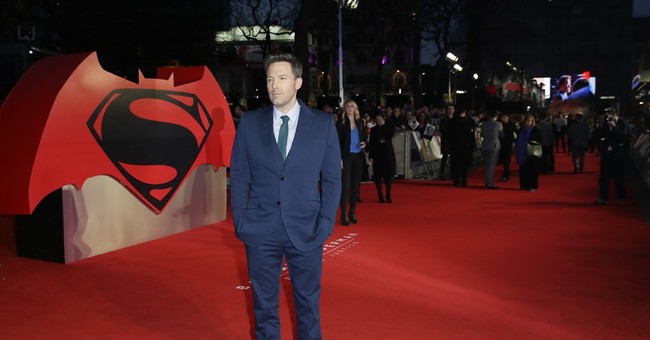 There’s a modicum of depth in the new superhero drama, Batman v Superman: Dawn of Justice. Unfortunately, it’s buried underneath a grim façade and an unrepentant reliance on fight scenes.

In the Christopher Nolan Batman films (which were rightfully dark affairs, though much less dreary as this), there were often thematic messages about the dichotomy of good versus evil (a battle that exists in individuals as well as society), the surveillance state, the importance of heroism (even unearned heroism), and mass uprisings against the wealthy.

Batman v. Superman isn’t that thoughtful. Instead of engaging in ideas, the new film simply offers viewers a variety of elongated action scenes and a depressing ambiance.

The film’s greatest strength is set up near its beginning. After a seemingly-compulsory sequence showing a young Bruce Wayne witnessing his parents' murder, the movie fast-forwards to the last action sequence of Man of Steel. The screenplay by Chris Terrio and David S. Goyer nicely presents that scene from a unique perspective. Instead of focusing on the center of the action, the movie introduces Ben Affleck as the devastated grown-up Bruce Wayne, who watches in horror as one of offices becomes collateral damage in the battle between Superman (Henry Cavill) and General Zod (Michael Shannon).

It’s this sequence and the one showing his parent’s demise that taints Wayne’s worldview, showing why he became such a dark and tortured hero (although the psychotic markings he leaves on some victims are a bit too much).

The main story-line here revolves around the underlying psychological differences between Superman’s hopeful philosophy and Batman’s dreary worldview, a contrast that Lex Luthor (a giddy Jesse Eisenberg) takes advantage of.

“If we believe there’s even a 1% chance that he is our enemy, we have to take it as an absolute certainty,” a fearful Wayne tells Alfred (an underutilized Jeremy Irons).

The dueling opinions are interesting and Wayne’s point of view is given additional weight by Senator Finch (Holly Hunter), an elected official who questions Superman’s honor after a botched mission overseas makes it seem like he was responsible for the mayhem that ensued.

There are a few inevitable twists and turns here but the shear dreariness of the sets and characters is overwhelming. Instead of creating an colorful world of intrigue, Snyder heavily relies on darker locations and bland sets to craft his vision. There’s little hope or optimism to be found in this two and a half hour slog.

When the battle of the two titans commences, it’s packed with relentless special effects and forgettable fight scenes. It’s ironic to see this considering that the film’s early scenes show the acute devastation of such explosions and events. One would think that Snyder would've realized how superfluous all of the extra explosions were. Instead though, the final forty minutes is packed with an inordinate amount of crashes and bangs and detonations.

Expectations for this drama have been sky-high for the past few months. In some ways, it overcomes early reservations (Affleck does fine work here as Bruce Wayne) but as an entire package, the film stumbles under the weight of its own extravagances. The story starts out uniquely enough but loses much of its credibility halfway through when Snyder’s melancholic vision begins to overshadow everything around it. By the fight sequence at the end, it’s hard not to be disappointed that this battle between two icons plays out as painfully as it does.