John Hanlon
|
Posted: Feb 22, 2016 12:01 AM
Share   Tweet
The opinions expressed by columnists are their own and do not necessarily represent the views of Townhall.com. 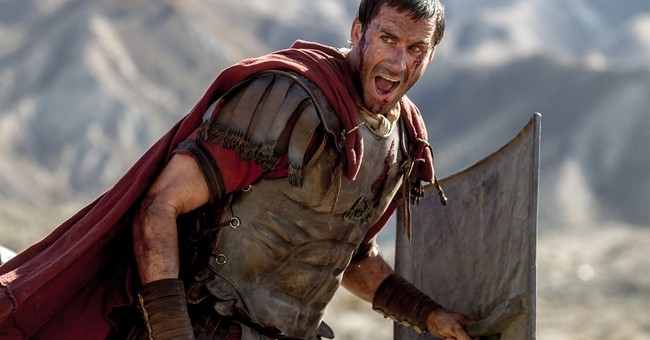 There have been innumerable films made about Jesus’ last days on Earth but there have only been a few made about what came afterwards. Written by Paul Aiello and Kevin Reynolds, the new film Risen attempts to explore those days from the perspective of a tribune named Clavius, who serves as Pontius Pilate's right-hand man.

Played by Joseph Fiennes, Clavius is a stoic soldier who spends his days doing the bidding of Pilate (Peter Firth), the weak-kneed leader who recently sentenced Jesus Christ to death.

The first major task that Pilate gives Clavius in the feature is to ensure that Jesus (Cliff Curtis), who is known in the film by the Hebrew iteration Yeshua, is dead. In one of the film’s most unsettling scenes of brutality, Clavius pokes a spear into Jesus' side and confirms his passing. It’s only then that the body is removed from the scene for a proper burial.

That isn’t enough for Caiaphas (Stephen Greif), the head priest. Because rumors have been circulating that Jesus could rise from the dead, Caiaphas demands that guards watch over Jesus’ tomb to prevent the disciples from removing the body and arguing that Jesus has risen. Despite this security, Jesus' body does disappear leading Clavius — alongside a brash apprentice named Lucius (Tom Felton) — to search for the truth about the resurrection.

Told from the point of the non-believing Clavius, the feature takes a more nuanced look at the resurrection. Clavius is like a detective searching for clues about a missing body. He hunts down possible suspects including Mary Magdalene (María Botto) like a detective on Law & Order hunts down suspects. He brings apostles and possible witnesses into his office for interrogations.

In that way, the story brings a unique approach to the material — one that enriches and embraces the Biblical text while expanding on it.

Director Kevin Reynolds accordingly does a strong job showing how Jesus’ resurrection threatened so many public officials in 33 AD. “Without a corpse to prove him dead, we have a potential Messiah,” Pilate states, agreeing with the Pharisees and high priests.

Reynolds also shows a few strong glimpses on how some people only realized Jesus' importance after the crucifixion. It’s only when Jesus is on the cross that one of the soldiers — who supervises the crucifixion — notes painfully, “This man was innocent.”

It’s true that religious believers will have much to recommend about this film. From the emotional tone surrounding Jesus' death (his mother’s crying in the background is heart-wrenching) to the depiction of the apostles — who are clearly frightened of what happens next — the story captures key elements of the Bible.

For non-believers though, this film is more than just a simplistic religious film about the followers of Christ. Its main character is a nonbeliever too. He doesn't believe in miracles or prophesies. He simply believes in what he sees for himself.

Admittedly, the ending does feature a predictable spiritual awakening but even that isn't handled as blatantly or flagrantly as we've seen in other pictures. Religious viewers will find satisfaction in the end here but the story itself is unique and thoughtful enough to merit the interest of nonbelievers.