John Hanlon
|
Posted: Jan 29, 2016 10:20 AM
Share   Tweet
The opinions expressed by columnists are their own and do not necessarily represent the views of Townhall.com. 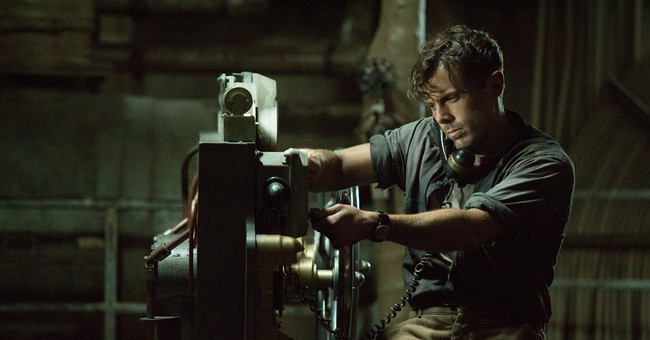 In 2014, director Craig Gillespie turned an inspiring story about a sports agent coaching young athletes from India into great entertainment with his film Million Dollar Arm. The drama was innocuous and traditional but was built strongly enough that the film’s effectiveness was seldom in doubt.

Gillespie has now followed that film up with The Finest Hours, another traditional but inspiring look at a man who overcame doubters to succeed beyond any doubt.

Instead of a former sports agent serving as the lead, the main character here is Bernie Webber (Chris Pine) — a conservative member of the Coast Guard who never met a regulation he wasn't willing to follow. After falling in love with a kind-hearted woman named Miriam (Holliday Grainger), Webber plans to ask his supervisor’s permission to get married in 1952. Unfortunately for him, his task is thwarted when he’s asked to travel out to sea in the midst of a storm to rescue the members of a sinking oil tanker.

The SS Pendleton — a tanker located off the coast of Cape Cod — had been literally ripped in two during the storm. The crew is stranded as towering waves and a seemingly-unstoppable storm threatened their survival. Casey Affleck plays Ray Sybert, the even-keeled leader on the Pendleton who is forced to use every method he can think of to keep his boat afloat for as long as possible. With little communication coming from land, Sybert could only hope and pray that someone was trying to rescue them.

Once the situation is established, Gillespie maintains three main storylines in the drama. The camera moves from Webber’s rescue attempt to Sybert’s methodical mission to keep his ship afloat to Miriam’s quest to find out her fiancee's status at sea. Miriam’s journey — which finds her confronting her husband’s supervisor (Eric Bana) — is the weakest of the three but it still provides a nice counterbalance to the dramatic ocean action sequences.

Like in Million Dollar Arm, the story follows a very traditional and comforting path but does show without overcoming the viewer with sentimentality. There are few scenes showing the shipmates talking about their loved ones back home. Instead, they are completely focused on surviving.

The three men who accompanied Webber on the rescue mission are simply trying to do their jobs and when their equipment falters, they understandably question their mission (how, they ask, can they be expected to find a sinking ship without a compass or radio contact?) On the Pendleton, Sybert too faces doubters but needless arguments onboard are fortunately truncated after Sybert shows that their plans to escape on a small row boat are futile.

The screenplay written by Scott Silver, Paul Tamasy and Eric Johnson and adapted from the book by Casey Sherman and Michael J. Tougias could’ve used a little tweaking. A side storyline about a failed mission that Webber previously participated in never offers the dramatic weight that it seemingly aimed to. Additionally, Miriam’s journey doesn’t work as well as it should’ve, especially when it needlessly drags on a few scenes too long.

That being said, The Finest Hours is a modest and commendable achievement. Packed with great special effects and featuring two great subtle turns from Chris Pine and Casey Affleck, the drama captures the frustrations and pains of both the crew members of the Pendleton and the heroic rescue team that went in to save them.

As the text notes at the end of the film, this rescue remains the greatest small boat rescue in the history of the Coast Guard. The rescue is made even more impressive when you realize how many obstacles and situations these men had to face in their attempt to survive this deadly storm.