John Dempsey
|
Posted: Nov 01, 2018 12:01 AM
Share   Tweet
The opinions expressed by columnists are their own and do not necessarily represent the views of Townhall.com. 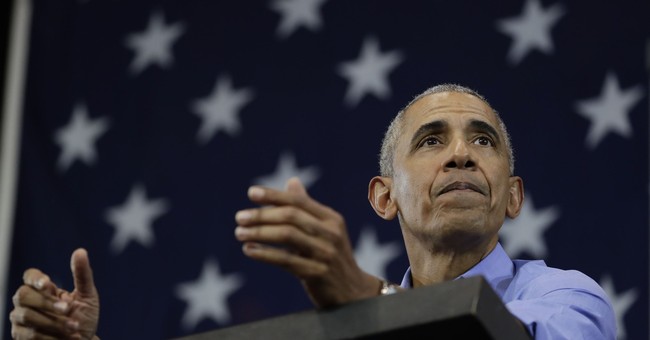 Former President Obama created a massive political divide between the left and the right we see today. His attacks against the right-wingers created an emboldened electorate, and now the fruits of his rhetoric are seen. President Trump is a result of Obama’s political discourse disguised as executive leadership. However, the legacy media and left-wingers tell a different story.

President Trump began to gain momentum in the 2016 primaries soon after announcing his candidacy. Many people scoffed and laughed at the notion of a “President Trump.” He proved them wrong and handily beat Democratic candidate Hillary Clinton. Soon after Trump took office, he instituted a travel ban from predominantly radical Islamic countries, backed law enforcement, signed on a massive tax cut, disintegrated ISIS, improved the job market, caused the stock market to soar, and the list goes on. All of these things are great for the country, but the left claims Trump is a divider.

However, Trump’s critics see through blue colored lenses. Trump does what is good for the country, and Obama did what was beneficial for Democratic leftism.

In reality, the country was politically divided well before Trump. We began to split as a nation during Obama’s first term, and it is hard to see how the division was not Obama’s goal. He was a community organizer in the 1980’s. The late President Ronald Reagan defeated left-wing ideology early in his first term, eliminating a chance of nationalizing the leftist agenda during the height of Communism. Obama used organizing for political separation that came from it. This mentality carried over into his presidency in which he used his platform as president to encourage the militant political tactic.

Obama commonly used race as a tool. If anyone disagreed with his policies, he or she was immediately labeled as a racist, shutting down any logical arguments. The left uses identity politics to win because left-wing policies are garbage. If a group of people is called racist enough times, the natural response is to get angry and pull away from common ground, or chance for compromise.

The left likes to say that Trump’s words are a “dog whistle” for racial motivations. They have no proof. However, Obama did not shy away from such things. In 2010, during a radio interview for Univision, Obama told Latinos they need to “punish” their “enemies.” A crack began to form between white and Hispanic communities and ironically black and Latinos as well.

America was founded on Judeo-Christian principles. Obama often called himself a Christian, but attacked Christians more than any other religion. In 2015, he used an Easter prayer to criticize Christians - days before radical Islamists slaughtered 147 Christian students in Kenya.

Security is essential to all citizens. No matter if a murderer yelled “Allahu Akbar” before attacking his fellow soldiers at Fort Hood, Texas, shooting co-workers at a Christmas party in California, or killing dozens at a gay nightclub in Florida, Obama always seemed dumbfounded at the reason. A president cannot consistently ignore situations like this and expect no animosity towards radical Islam in general.

Obama was not a stranger to making snide comments towards those who believe in the Constitution. In 2008, he was on the campaign trail and said that citizens in flyover country are racists and they cling to their guns and religion, just because they disagreed with his economic policies. His comment was not forgotten.

In 2016, protests that turned into riots were frequent, but Obama did not condemn the violence and property destruction. Instead, he praised the protests, but when the group became unruly, he was silent.

These are just a few examples of why our political issues did not start two years ago but in 2008. Obama did not want to unite the country. He was trying to change America as promised. But first, it must be broken down before a changing it. In one way he did change us, and the result is what we see now in over 600 citizen on citizen politically motivated assaults.

Change cannot occur without division. Obama tried to divide us, and artificially put the country back together but failed. Instead, Trump was left with a mess - not just economically, but socially and culturally as well.

Now, the left and mainstream media are projecting these problems on Trump when their savior is at fault.