John Dempsey
|
Posted: Sep 29, 2018 12:01 AM
Share   Tweet
The opinions expressed by columnists are their own and do not necessarily represent the views of Townhall.com. 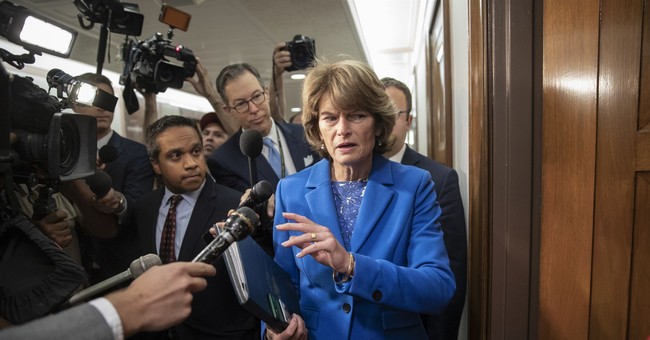 The Senate is sitting at a 51-48 in favor of Republicans right now due to the passing of Republican John McCain. There is little room for error in political moves. Right now, there are three significant Senate Republican liabilities in Susan Murkowski (AK), Susan Collins (ME) and Jeff Flake (AZ). Joe Manchin (WV) is a Democrat who is believed to be movable to the right on the confirmation vote. Ultimately, the Christine Blasey Ford letter and subsequent political hit pieces released by liberal news publications were intended for the senators as mentioned earlier, not the American people.

Four senators hold Supreme Court nominee Judge Brett Kavanaugh’s seat in their hand. Dianne Feinstein’s office leaked the letter after Christine Ford asked her to keep it secret. She exposed this woman simply for political gain and the attempt at getting back in power. Feinstein knows the road to the legislative majority goes through Murkowski, Flake, Collins, and Manchin. She has taken Ford’s claim and attempted to parlay it into swaying the four senators.

Collins, Manchin, and Murkowski have been possible swing votes for some time. However, Alaska went to Trump in 2016, and Collins’ state, Maine, went half to Trump in their unique Electoral College system. Trump beat Hillary by 40 percent in West Virginia.

Flake stands out in this group of senators. His hatred for Trump can be displayed and manifested in his vote. Kavanaugh was on fire in his testimony today. He was articulate, honest and acted like an innocent man accused of a horrendous crime. If Flake decides to ignore what happened today for the sake of thumbing the eye of Trump simply because of personal animus, then Flake has no moral/ethical compass.

The American people are not Democratic targets in today’s hearings. Flake, Murkowski, and Collins are in the left’s bull’s eye.

It is no secret that Flake does not like President Trump and vice versa. He is not running for reelection in his state due to low approval numbers, most likely because of attacks on Trump. Flake has to make a decision. Will his animosity towards Trump be a factor in voting no on Judge Kavanaugh merely to thumb the eye of the president, or choose to honestly vote for his constituents who voted for Trump, winning Arizona in 2016, or will he do what he wants since reelection is not an issue?

Feinstein and the rest of the Democratic Party cannot deny Kavanaugh due to his merits. They have launched vicious accusations on him in hopes of strong arming the four vulnerable senators into a “no” vote. The hearing might as well be called a shaming. Feinstein did not release the letter in hopes to sway American citizens one way or another. Her goal was to take the senators who were most likely to vote against Kavanaugh and manipulate them into rejecting his nomination.

Since Kavanaugh could not fail based on his merits, and he was going to get the confirmation, Feinstein needs to convince four vulnerable senators that they should vote “no,” and that is why she released the letter.

The timing of the letter was an attempt to solidify the minds of Collins, Murkowski, Flake, and Manchin to vote down on Judge Kavanaugh.