John Dempsey
|
Posted: Jun 18, 2018 12:01 AM
Share   Tweet
The opinions expressed by columnists are their own and do not necessarily represent the views of Townhall.com. 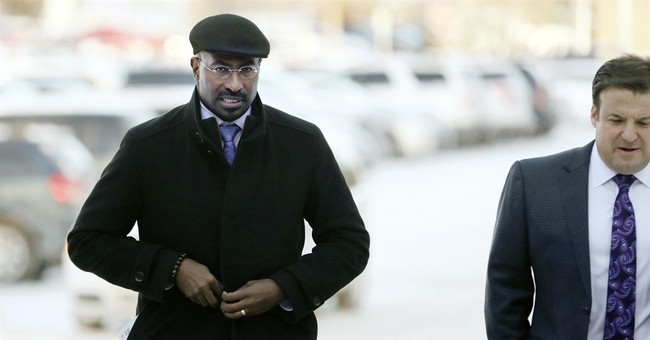 Let’s be honest from the start. Liberals don’t care about the illegal alien minor children crossing the border. The left isn’t trying to help the kids for their well-being. They are painting President Trump in a bad light while ignoring the same policy was enforced under Obama. CNN is at the forefront of the fake hysteria. Recently, Van Jones, a political commentator on CNN, said that it is time for Christians to “impose some morals and some principles” in the debate. It’s ironic that Jones is trying to employ evangelicals to push for the left’s political agenda.

Christians have been mocked and attacked by the left and mainstream media for decades. They are called bigots for not condoning gay marriage, or the same-sex lifestyle. Believers are called "patriarchal" for disdaining abortion. Anything that has moral standing based on Biblical principles and values is insulted and made into a joke.

Now, Jones has found that Christianity might have a place. But that place is only in the court of public policy, and must it must be on the leftist side of the argument. Jones is suggesting Christian’s campaign for the children who were brought here illegally by their parents, ignoring the fact that this would not be an issue if the parents weren’t carrying the children in the first place.

The left cannot preach morals. Surprisingly, Jones is being slightly honest by trying to get Christians on board. It is as if he knows morals are challenging to find on his side of the aisle, so he is recruiting evangelicals to do the work.

There is no expectation for Christians to become involved in the moral debate simply due to the left not having any morals. It is not the responsibility of the Christian-right to step in because the Democrats voted to remove references to God, then place them back in a few days later in 2012, showing their contempt for Him.

Nihilism is a pillar on the left. They feel that morals are human-made, and are relative, making them changeable. By using Christians, they are merely pulling at people’s heartstrings. Without a God, they can’t make a moral argument that is defendable. The strange dichotomy is they hate Christianity, but they are trying to use believers to advance their agenda.

Recently, left-wing media “pundits” have quoted Bible verses. Yes, the same Bible they mock, call hateful, trash, idiotic, and so forth like it all of a sudden.

Van Jones isn’t the person the left wants to speak out. The man is a self-admitted communist. He supports a political ideology that is responsible for the death of millions in gulags, and work camps. Jones is content with the situation of people living in Venezuela.

Democrats, pro-amnesty Republicans, and the mainstream media are trying to make this situation Trump’s fault, but it is the exact opposite. Illegal aliens were encouraged to cross the border during the Obama Era. Amnesty advocates knew about the Catch and Release policy. They only hoped for no pushback.

Yes, Christians should help those in need. However, what they decide to do isn’t contingent on what is said by politicians, and media members. This is between them and God.

Van Jones, stop pretending that you encourage Christianity because of their morals and principles now. Your façade is thin. Stop trying to guilt Christians for your political goal, while despising them.