Shoulda Said Rouge on a Corpse 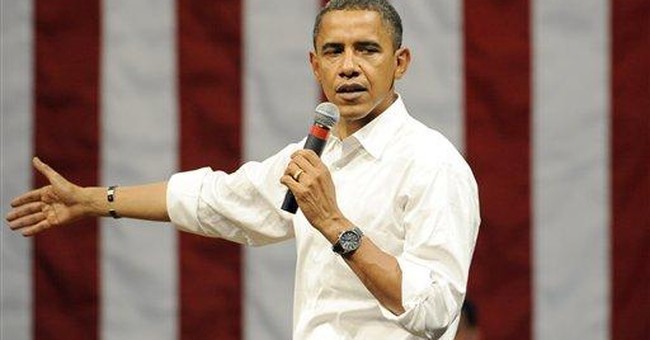 I absolutely don't believe Obama was jabbing at Sarah Palin with his "lipstick on a pig" remark the other day, and I hope she and McCain laugh it off or shrug it off.  Repay him with grace for his gracious refusal last week to drag Bristol into the campaign.  Send him a gift box of lipsticks from Avon and move on.

I'll bet that around the Illinois Senate where Obama served, as around the Colorado Senate where I served, two of the cliches to describe a futile spin effort were that you can try to put lipstick on a pig or rouge on a corpse, but you'll fool no one.  Young Obie probably absorbed both in his vocabulary when Sarah was unknown beyond Wasilla.  Don't you know he wishes now that his preferred cosmetic for mocking his opponents' claim of change had been rouge.

If the remark wasn't a slur, though, it was still a gaffe, a big and easily avoidable one.  Which gives more evidence that Obama is badly off his game right now, rattled by the Palin phenomenon and the dramatic momentum shift since his Invesco Field acceptance speech here in Denver. (How long ago that already seems!)

Any candidate thinking clearly on his feet, as you simply have to do at every moment in the big leagues, would have done a self-edit when "lipstick" and "pig" presented themselves in the same sentence and instantly substituted -- rather than added, as he did, too late -- the smelly fish reference or something else with no double entendre.  Barack did this to himself because he's obviously not thinking clearly at this season of unexpected adversity.

You can hardly blame the poor guy.  It's tough out there all of a sudden. Exhibit A would be the New York Times front-page story last Sunday: "Rival Tickets are Redrawing Battlegrounds.  Palin Helps GOP Put More States in Play."  It said in part:

"Fresh from the Republican convention, Senator John McCain's campaign sees evidence that his choice of Gov.Sarah Palin as his running mate is energizing conservatives in the battleground of Ohio while improving its chances in Pennsylvania and several Western states that Senator Barack Obama has been counting on, [including] Nevada, New Mexico [and] Colorado."

Exhibit B, corroborating this as far as my own state is concerned, would be the 13,000 who turned out for McPalin in Colorado Springs on Sept. 6.  With any other running mate, Mac would have drawn maybe thirteen hundred.

Exhibits C and D, a couple of columns that have made waves this week on talk radio and the conservative blogs.  Pundits can say anything, of course, and two swallows don't make a summer, but what's striking is the confident prediction of not just defeat but decisive defeat for Obama, partly as a result of the VP matchup.

Heather Higgins, board chair of the Independent Women's Forum, wrote here on Townhall.com:

"Here’s an unconventional prediction: in this race, unlike those before, the Vice President will actually matter, particularly in what they capture relative to that anti-Washington sentiment. Barring major mishap, here’s a second unconventional prediction: this isn’t going to be a close election, but will look far less like 2000 or 2004 than it does like McGovern in ’72."

And Spengler (pseudonym of an Asia Times columnist whose identity not even Google seems to know) wrote in his latest piece, which Rush Limbaugh trumpeted to the world on Tuesday:

"Obama will spend the rest of his life wondering why he rejected the obvious road to victory, that is, choosing Hillary Clinton as his vice presidential nominee. However reluctantly, Clinton would have had to accept. McCain's choice of vice presidential candidate made obvious after the fact what the party professionals felt in their fingertips at the stadium extravaganza yesterday: rejecting Clinton in favor of the colorless, unpopular, tangle-tongued Washington perennial Joe Biden was a statement of weakness. McCain's selection was a statement of strength. America's voters will forgive many things in a politician, including sexual misconduct, but they will not forgive weakness.

"That is why McCain will win in November, and by a landslide, barring some unforeseen event. Obama is the most talented and persuasive politician of his generation, the intellectual superior of all his competitors, but a fatally insecure personality. American voters are not intellectual, but they are shrewd, like animals. They can smell insecurity, and the convention stank of it. Obama's prospective defeat is entirely of its own making. No one is more surprised than Republican strategists, who were convinced just weeks ago that a weakening economy ensured a Democratic victory."

To repeat, and use another cliche, these are but straws in the wind.  But it was interesting to hear Hugh Hewitt, no incautious cheerleader, also speculating on the air Tuesday that we may be seeing everything start to crumble for Barack Obama and the supposed Democratic sure thing.

One reason, then, for Obie not to have made the safer remark in his Ohio speech that "You can't put rouge on a corpse" is that he may be starting to get morbid feelings about his own chances in November.  Final cliche: Never mention rope in house of a hanged man.