No Thanksgiving at the Border

John and Andy Schlafly
|
Posted: Nov 22, 2017 12:01 AM
Share   Tweet
The opinions expressed by columnists are their own and do not necessarily represent the views of Townhall.com. 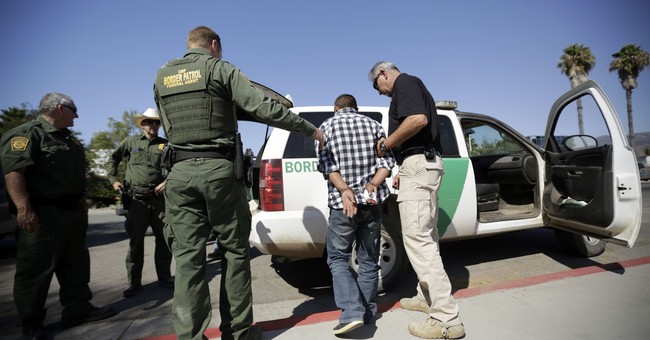 Editor's Note: This column was co-authored by John Schlafly.

On the first day of Thanksgiving week, U.S. Border Patrol agent Rogelio Martinez died and an unidentified second agent was seriously injured as they patrolled a lonely stretch of Interstate 10 in west Texas, near the Mexican border.  Grapefruit-sized rocks thrown by men who had illegally crossed the border in an area where, as the New York Times reports, “drug and human trafficking are common” apparently caused the agents’ injuries.

The U.S. Border Patrol has tallied 720 assaults on border officers in the last fiscal year, and 38 agents have been killed in the line of duty since 2003. You’d think the dangerous assaults on federal agents would have given pause to the federal judge in San Francisco who was considering a lawsuit challenging President Trump’s crackdown on sanctuary cities, but no.

Judge William Orrick went right ahead on Monday night with his 28-page order declaring a nationwide permanent injunction against the president’s effort to punish sanctuary cities with the loss of federal funds.  Judge Orrick was named to the federal bench in 2013 after he bundled at least $200,000 for Obama and donated another $30,800 to groups supporting him.

As U.S. Attorney General Jeff Sessions said last week in his address to the Federalist Society, “an increasing number of district courts are taking the dramatic step of issuing nationwide injunctions that block the entire U.S. government from enforcing a statute nationwide.  In effect, single judges are making themselves super-legislators for the entire United States.”

“The Supreme Court has consistently and repeatedly made clear that courts should limit relief to the parties before them,” General Sessions continued.  “So if lower courts continue to ignore that precedent, then the Supreme Court should send that message again.”

Last month California became a sanctuary state when Governor Jerry Brown signed a new law that limits what state and local officials can say to federal immigration officers about people detained by police or waiting trial.  It also prohibits law enforcement from inquiring about a person's immigration status.

State senate president pro tem Kevin de Leon, who is running to replace Dianne Feinstein in the U.S. Senate, championed the law, known as SB 54.  If elected, he would represent a state that is home to more than 2.3 million illegal aliens – a state where 45 percent of the population told the Census Bureau that a language other than English is spoken at home.

The harm of sanctuary policies is illustrated by the case of Nery Israel Estrada-Margos, who was arrested by Santa Rosa, California police on August 18 after allegedly beating his girlfriend, Veronica Cabrera Ramirez, to death.  The illegal alien had been arrested two weeks earlier, on August 2, for domestic violence, but released because he had no prior convictions.

The sheriff of Santa Rosa county, which has its own sanctuary policy, defended the prior release by claiming he gave a heads-up to agents of the federal Immigration and Customs Enforcement (ICE).  In fact, local officials gave ICE only 16 minutes to travel over 60 miles, and the man was gone by the time ICE got there.

Similar atrocities have occurred in other sanctuary jurisdictions, which are mostly found in the 20 so-called blue states that voted for Hillary Clinton for president.  In Maryland near Washington, D.C., Montgomery County officials ignored a detainer from ICE in order to release Mario Granados-Alvarado, who broke into an unmarked police car and stole an AR-15 and ammunition from the officer’s trunk.

Near the town of Brentwood on New York’s Long Island, three more young bodies were found bearing the marks of ritual killing by the gang called MS-13.  They were Angel Soler, 15, from Honduras, who had been hacked to death with a machete; Javier Castillo, 16, from El Salvador; and Kerin Pineda, 19, from Honduras.

In Massachusetts, the popular columnist and talk-show host Howie Carr identified an assortment of violent crimes recently committed by “Third World illegal-alien criminals.”  In just the last few weeks a Cambodian, an African, a Salvadoran, a Dominican, a Vietnamese, a Chinese, and a Liberian were charged or convicted of murder, assault, drug trafficking, identity fraud and resisting a federal officer.

The tax reform bill moving through Congress plugs one of the ways in which illegal aliens have been supporting themselves with federal tax credits.  The bill requires a valid Social Security number to claim the Additional Child Tax Credit, under which $4.2 billion a year has been paid out to illegal aliens who lack a valid number.

That’s fine as far as it goes, but child tax credits should require a valid ID from both parents, not just one.  An even better reform, which is not currently in the bill, would be to prohibit employers from getting a business tax deduction from wages paid to unauthorized alien workers.

According to the Center for Immigration Studies, $165 billion a year in deductible wages is currently being paid to illegal workers, thereby saving their employers about $25.4 billion a year in federal taxes.  Plugging that gap would yield $254 billion over 10 years that could support additional tax cuts for law-abiding Americans.

John and Andy Schlafly are sons of Phyllis Schlafly (1924-2016) whose 27th book, The Conservative Case for Trump, was published posthumously last year.