The U.N. Strikes Again: Hamas not Terrorist, but Israel Is? 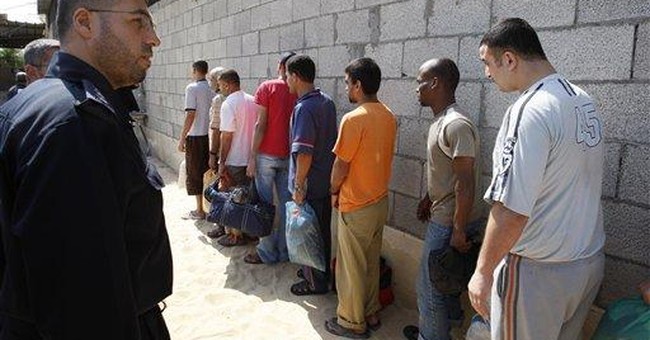 Looking at the latest high-profile “report” from the United Nations on the recent war in Gaza between Israel and Hamas, it’s not difficult to understand why the vast majority of Americans harbor deep distrust of the international body.

Though the UN has a disturbing history of cozying up to thugs and tyrants—each dictator has an vote in the General Assembly equal to the United States—it is the international body’s unrelenting obsession with Israel that reveals its moral bankruptcy.

Genuine massacres in Sudan and Rwanda or ongoing brutality in Burma and North Korea elicit barely a yawn at the UN. But Israel wages a carefully planned and orchestrated military campaign to root out terrorists who have intentionally embedded themselves in civilian areas and the UN issues a breathless 554-page report accusing the Jewish state of “war crimes” and “terrorism.”

To appreciate the utter absurdity of the so-called Goldstone report, consider:

1. Even though the report was about the fighting between Israel and Hamas, the Palestinian Authority is chastised for violating human rights—by closing Hamas charities and firing Hamas terrorists from the government payroll.

2. Hamas is never referred to directly as a terrorist organization, and further, its intentional firing of rockets into Israeli civilian areas was not necessarily done to terrorize.

3. Human shields were used, the report concluded, but by Israel, not the Hamas terrorists who chose to launch rockets and mortars from crowded civilian areas and near schools and hospitals.

4. Only one party could be confirmed with certainty as terrorists: Israel.

Issues of balance aside, the quality of the evidence cited is at best dubious. Rumor and speculation provide foundation for some of the most outlandish allegations, and most of the report itself is not the work of first-hand research, but rather repeating claims made by various NGOs or news accounts from the likes of al-Jazeera.

Among the experts cited by the Goldstone report were the unquestionably fair-minded Central Commission for Documentation and Pursuit of Israeli War Criminals and an avowed and avid collector of Nazi memorabilia.

Such is what has become of the United Nations.

When the Goldstone reports addresses Israeli actions, subtlety is the first casualty. Without mincing words, the Jewish state is deemed a war criminal—again and again. In the few instances where it even broaches the topic of possible Hamas wrongdoing, the report employs oddly tortured verbiage with no almost direct conclusions.

Here are some of the bold, unmistakable accusations leveled against Israel:

2. The UN mission in Gaza “considers the attack was not only an attack intended to kill but also to spread terror among the civilian population.”

3. “It is in these circumstances that the [UN] Mission [in Gaza] concludes that what occurred in just over three weeks at the end of 2008 and the beginning of 2009 was a deliberately disproportionate attack designed to punish, humiliate and terrorize a civilian population”

4. “Such treatment amounts to measures of intimidation and terrorism.”

5. “In some cases the Mission additionally concluded that the attack was also launched with the intention of spreading terror among the civilian population.”

Compare the above slams against the meticulously ambiguous language about Hamas:

1. “It is plausible that one of the primary purposes of these continued [Hamas rocket] attacks is to spread terror.” (emphasis added)

2. The UN report authors also found “significant evidence to suggest that one of the primary purposes [of firing rockets into southern Israel] ... is to spread terror.” (emphasis added)

3. “These acts [firing rockets and mortars into Israeli civilian populations] would constitute war crimes and may amount to crimes against humanity.” (emphasis added)

Why does the UN have no compunction in characterizing the Jewish state’s actions as “war crimes” and “terrorism,” yet when it comes to Hamas, it meekly offers that there is “evidence to suggest” that it’s “plausible” that the group’s actions “would” or “may” constitute terrorism or war crimes?

Perhaps the answer can be found in the “experts” tapped by the UN. Among them was now-suspended Human Rights Watch senior analyst Marc Garlasco, who was recently revealed as an obsessive collector of all things Nazi and who said in an online posting that an SS leather jacket was “cool.”

Two of the HRW Gaza war reports on which Garlasco was a lead investigator were cited several times by the Goldstone report. As noted by watchdog group NGO Monitor, Richard Goldstone himself was a longtime board member of HRW, and the Goldstone report re-published without verification several of the claims made by Garlasco’s unit.

Then there’s Palestinian psychiatrist Dr. Iyyad El-Sarraji. In one of the “fact-finding” hearings conducted for the report, Dr. El-Sarraji compared Israelis to Nazis. The UN was smart enough to cut the Nazi reference from the final report, but still quoted approvingly the good doctor who thinks of Israelis as Nazis.

Given that U.S. taxpayers have lavished the UN with billions and billions of dollars over the years, one wonders why the group’s report would stoop to relying on al-Jazeera and a Nazi fetishist as sources.

Unless, of course, the UN went looking for the sources that would give them the conclusions it wanted long before Israel ever launched its campaign against Hamas.