Trump Deserves the Scorn He's Getting Over Executive Action

Joel Goodman
|
Posted: Jun 23, 2018 12:01 AM
Share   Tweet
The opinions expressed by columnists are their own and do not necessarily represent the views of Townhall.com. 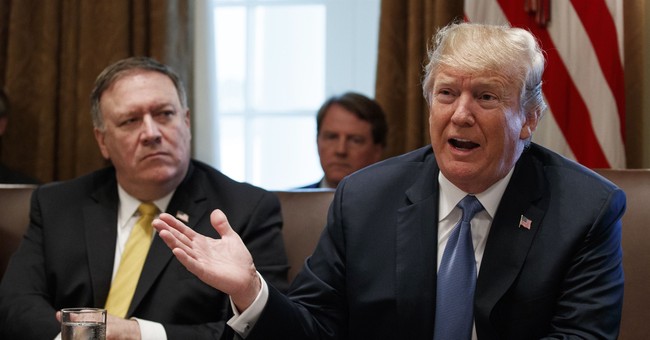 These are the geographic coordinates for Washington, D.C.

I have just emailed them to Russia in the event that they are so busy destroying our political system through intrigue they have misplaced Washington’s location for their ICBM targeting systems.

This is only a fail safe effort on my part - getting the Russians to destroy Washington in the event that we don’t fully destroy ourselves within the next few weeks.

Until very recently I used to think that a civil war was inevitable. I now believe it no longer is, as both the Democrats and Republicans will soon go down in flames as one entity as the entire country sinks before our very eyes.

I can almost envision a soon to come time when smooth talking Barack Obama will appear as a viable alternative to the spineless loud-talking neophytes and long time crooks comprising our government. Quite possibly Mr. Obama knows this and that is the reason he has stayed in DC.

For one week of incessant Right Wing talk radio we were subjected to lectures and rants about a country of laws, about the rule of Law. We were educated with a quote from Abe Lincoln in which he said that the best way to be rid of a bad law is to enforce it. We heard that criminals at the border being separated from their “parents,” was no different from bank robbers and petty thieves being separated from their families while in jail, how political hostage Paul Manafort was being separated from his family. We heard about Donald Trump being the first Republican to stand up to the Left, and how he refused to use his executive authority to change legislation. We heard about the fallaciousness of much of the histrionics and hyperbole that created a media manufactured hysterical situation - a situation that even brought out Laura Bush to attack Donald Trump. And we knew not to get excited about criticism coming from the wife of an icon of the Eastern Establishment, the same group that attacked Goldwater in 64’ Reagan in 80’ and will continue attacking Trump forever.

But after all the lectures and admonitions, after all the information about Obama being an executive order freak and how the “problem” at the border was a legislative matter created well before Trump got into office, President Trump signed an executive order, which keeps criminal alien families together at the taxpayers’ expense. With the stroke of his pen, the president has called for the construction of special facilities for criminal alien family housing, which I foresee becoming a permanent Section Eight Housing program. I can even envision Illegal Alien Federal Sanctuary Neighborhoods being created, with schools, hospitals and fire and police departments.

For his action, the president has been called a liar for having earlier said he could do nothing about the separate incarceration of illegal alien parents from their children.

He has been described as having “blinked” before political pressure, because he solved a problem of his “own making” and then had to back down.

Whether there is any truth or accuracy in the original or additional accusations being made about him since this nonsense began as a political move by the Democrats and some Republicans, Mr. Trump deserves all the scorn that can be laid at his feet for his Executive Action.

Now Trump is a pretty shrewd guy and can read the political mood of the country fairly accurately, and can maneuver his way through the media BS. That he is somewhat lacking in historical perspective and possibly on the best French red Bordeauxs, are faults that will not serve to undermine him as president, but making concessions to the insatiable Left and backtracking on his stated political philosophy about legal governance and the rule of law condemns him to a political hell.

In 2017 I wrote an article about immigration, which in its simplicity defines the immigration debate and put it into an historical perspective. I believed that the substance of the article was understood by the current administration;  and if not by the President himself, at least by his advisors. Obviously this is not the case, and our immigration policy once again will be determined by politics rather than by what is best for the American citizen.

There’s and old adage, “If you can’t take the heat, stay out of the kitchen.” It would appear that Mr. Trump ain’t made of as much asbestos as we thought.