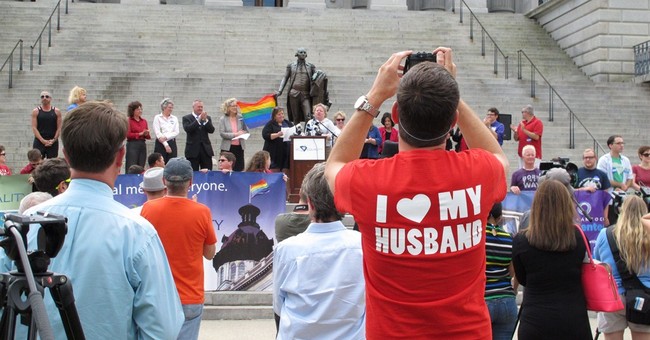 Once upon a time, a homosexual couple’s only desire was the right to have sex in the privacy of their own bedroom. To achieve that desire, Lamba Legal (with support from the ACLU) filed a lawsuit, Lawrence v. Texas, on behalf of a gay couple against the state of Texas after the couple was arrested for committing sodomy, which at the time was illegal.

That was in 2003, and consensual sex (sodomy) won because the court found that ‘moral consensus’ was not a ‘legitimate state interest’ sufficient to usurp the ‘liberty interest.’ That victory gave the LGBT leadership impetus and ever since they’ve been on a mission to exterminate morality.

At the time, it’s likely most Americans assumed the homosexual victory was insignificant because it wouldn’t impact them. I mean really, who cares if two buddies want to spend their nights together? And considering less than 3% of the American population is actually homosexual or sexually modified – many of the 97% probably assumed the ‘gay movement’ would be minimal and short lived, kind of like another movement that happens daily.

But neither of those assumptions turned out to be true because the LGBT leadership insists the world embrace their chosen sexual paths, or face hostile intimidation and expensive legal battles.

Thanks to our secular government’s relentless attacks on our religious liberties, Hollywood’s focused assault on morality, and the media’s glorification of the LGBT lifestyle (and decorating talents), the naked truth of the LGBT’s dastardly destruction is inescapable. In fact, the LGBT’s hedonistic blows to Christian entrepreneurs are killing businesses.

Just ask Cynthia and Robert Gifford, owners of Liberty Ridge Farm, who got trapped in a nasty sting operation orchestrated by Melisa McCarthy and Jennifer, her lesbian partner. Late one evening in the fall of 2012, Cynthia got a call from Melisa who was inquiring about getting hitched on the Gifford’s property and guess what; her pal Jennifer just happened to be recording the conversation – coincidentally of course.

When Melisa said she was planning a wedding, Cynthia invited her to visit the farm to view the venue. A few moments later Cynthia realized Melisa wanted a lesbian wedding and politely explained she and her husband don’t host same-sex wedding ceremonies because of their Christian faith. While Cynthia never rescinded her invitation to Melisa to consider the farm as possible location for their reception (all part of the recording), it didn’t matter. Because these two chicks had found themselves an easy target and wasted no time in filing a complaint with the ACLU who referred it to the NYCLU, who immediately filed suit against the Giffords.

The tough thing about this case is that the Gifford’s farm is a family oriented business with seasonal activities for kids, like a pumpkin patch and cornstalk maze. To enhance their agricultural business, the Giffords spent hard-earned money to construct a large barn on the property specifically designed to hold parties and gatherings on the first floor, dressing rooms for the bridal parties on the second, and their private residence on the third floor.

Since their business is truly operated in their home and the Giffords are Christians, they have a problem hosting activities that violate their faith – in their private residence. But the Human Rights Commission didn’t give a rip, nor did they care that the Giffords employee gays and have hosted plenty of same-sex parties and events (just not the weddings).

In Gifford v. New York State Division of Human Rights, Administrative Law Judge, Migdalia Pares, apparently didn’t consider the U.S. Constitution or the Giffords rights at all when she slammed down her gavel. Quite the contrary, she levied fines of $13,000 and ordered the Giffords to hold LGBT weddings – in their own home – or not hold them at all. And in Orwellian fashion, she ordered the Giffords to indoctrinate their staff with re-education training classes so they can ‘learn’ the state’s viewpoint on marriage (which is apparently that anything goes)…. Care to marry your donkey?

Call me crazy, but government mandated re-education sounds a lot like brain-washing, which is only one step away from getting sent to the gulag.

Not wanting to go down either of those paths, the Giffords opted to do what any red-blooded American would do; fight back.

Thanks to Alliance Defending Freedom, the Giffords have filed a petition asking for a review of the decision. Depending on the outcome from the Appellate Court, maybe the Giffords won’t have to endure brainwashing camp – and even better – maybe they’ll be allowed to live out their faith.

“All Americans should be free to live and work according to their beliefs,” said Gifford’s attorney, James Trainor. “Entering the marketplace doesn’t mean the government can force a person to surrender their First Amendment freedoms or face punishment. The commission demonstrated stunning disregard for the Gifford’s rights, which were never considered at the hearing.”

I guess it all happened when the ‘politically correct’ liberals who spout ‘tolerance’ became rigidly intolerant of anyone who doesn’t agree.

For over two thousand years Christians around the world have upheld the ideal that holy matrimony is the joining of one Man and one Woman in a monogamous relationship, as God ordained. According to The Book of Common Prayer, Marriage is symbolic of the “mystical union betwixt Christ and His Church.”

Since LGBTs, Obama and our secular courts seem hell bent on destroying the definition of marriage, it’s not a stretch to assume their real mission is to trash this prime teaching of the Church. If they’re bold enough to trash the Church, they most assuredly will have no reservations about trashing our precious constitution.

As Mr. Trainor said, “The constitution prohibits the state from forcing people to promote a message that violates their religious beliefs and conscience, and thus the government should not be able to force anyone to choose between their faith and their livelihood.”

It makes absolutely no sense why a minuscule percentage of the population gets to dictate how the rest of us live . . . until you consider that perhaps the LGBT leaders are nothing more than immoral zealots on a jihad to gain public approval of a behavior they themselves feel insecure about. So insecure in fact, they demand validation from others through the secular courts. Hum.

Bottom line, business owners need to be on high alert when answering inquiries about their services or products. Because chances are the person on the other end is setting a nice little trap with plans to embroil you in an expensive legal battle and destroy your business.