Escape From Boko Haram: The Chibok Schoolgirls and Eve's Story 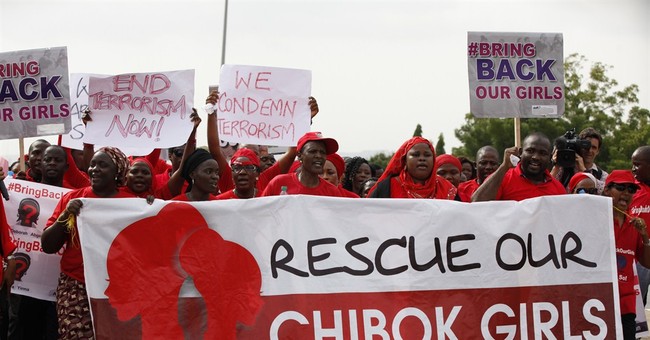 “We were asleep in our beds when we heard voices and then gunshots,” Eve began. “I told the other girls not to worry, it was just the police . . .”

Our group had gathered in the office of Congresswoman Frederica Wilson, FL, D-24. Wilson had already met the girls in June during a Congressional fact-finding mission with Emmanuel Ogebe and members of Congress, so this was a welcome reunion, complete with hugs and big smiles. Once the girls were settled, Wilson asked Eve if she would share her story of escape again. (paraphrased and notes added) “Some of the girls say we should run. Some say stay. Some say the men are just playing outside.” Eve turned away and hugged the rounded armrest while Ruth and Sarah tried to disappear into the cushions. “But I don’t agree.”

Police regularly patrolled the school grounds at night. But on that fateful night a few Boko Haram terrorists masqueraded as policemen to gain entry and then opened the gates for all the rest. Also, approximately 40-50 girls sleep in each dorm, so they were fairly easy to find.

“I say to everyone, ‘Get dressed.’ So we put on our school uniforms . . . then we wait. The gun shots are still going.” She pressed her hand to her forehead.

“The men entered our area and started saying ‘Allahu Akbar’ and then I think they are Boko Haram.” Eve took a deep breath. “Then two came in. We want to run but they tell us to all gather in one place. When we gather, there are more men all shouting ‘Allahu Akbar! Allahu Akbar!’ and we know for sure.”

Eve buried her head in her hands, wiping her brow. Ruth and Sarah clenched their fists and crossed their arms tightly, barely breathing.

“Then they search for the rest of the girls. When we are all outside in one place . . . they ask us, ‘Where are the boys?’ and we say, ‘The boys are not here, they are off of school.’ But they say we are lying and keep asking us.”

If the boys had been at the school, they would most likely have been slaughtered.

“We knew Boko Haram had burned other schools and we knew today . . . they had come to us. We all start crying. They told us to keep quiet. They told us to not run or they would shoot us dead.”

“Then they asked us for the engine for preparing blocks.”

This was a critical piece of information because the ‘engine’ is a rectangular steel form the Nigerians use to mold adobe style blocks, which are used to construct buildings. The fact that the terrorists were looking for the forms gives credence to the suspicion they are building compounds and concentration camps in the bush for their hostages.

“They ask where is the supplies. They make two girls show them the food (mostly bags of grains and rice). They make us walk to the gates and we see all the other Boko Haram. They are everywhere.” Eve leaned further into the armrest, focusing her eyes on one spot.

“They tell us if any girls try to run, we will shoot her, we will not care. We will just shoot her. They made us pack up everything into two cars (trucks). They packed the plates, bowls and food. Then they started burning the school.” She gulped for air. “They burned everything.”

“They made us follow them into the bush and they bring cars (at least four flatbed trucks meant for hauling troops) and tell us to get in or we will die.

“We are moving for a while. Then one car spoiled (broke down) and is not moving. So they just burned it and all of the food that was inside. Then they made us move into another car but it is too small. So the rest of the girls had to follow us with their legs (walk).

“When we reached one village, they bring another car and put the rest of the girls in it. Then we are moving again. It is still dark. Later another car spoiled (broke down) and they burned it.

“When we are moving again, we hit a tree and the branch hits the girl next to me and enters her leg . . . she is broken (tree branch penetrated her friend’s leg, fracturing it). I hold her in my lap and she is shouting, ‘My leg! My leg!’ I try to quiet her.” Eve wipes her forehead again and pinches the bridge of her nose to halt the tears. “I tell her to keep quiet because the Boko Haram will shoot her if she does not.

“I saw the rest of the trucks were far away and we are the last one. I say we should jump because we don’t want to die. Some were afraid but then one girl jumped and then the rest. They ran into the bush. But I was holding my friend in my lap and could not jump.” Eve exhaled sharply. (It is unclear if the injured girl survived).

“Then the car we are in breaks down and we get separated from the rest of the girls.” She inhaled sharply. “They made us get out and sit under a tree. They told five girls to cook the food they took from the school.”

Based upon when the girls returned to Chibok, it is estimated they had been in captivity for at least 24-36 hours by this time, probably traveling a great distance across northeastern Nigeria.

“Finally I just stand up and ask a man, ‘I need to ease myself,’ (use the bathroom) but he says no and makes me sit down. So I go and sit, but I cannot wait, so I ask him again, two more times. Then he gets angry and tells me to ease myself in front of him, but I cannot do this, so I go back and sit down.

Rep. Wilson: “Tell us about how disguised yourself to escape.” She looks at her staff. “This is my favorite part.”

“After we ease ourselves, we saw the man was not watching. I say we should run. Everyone agreed and we prayed, ‘May God help us,’ and then we ran.

“We are running for a long time and don’t know where we are. And then night meets us (it grew dark – unsure if it was second or third night). Ruth wants to sleep, but I make us keep going.

“Then we hear a cow mooing and we run toward the sound and see the house of a Fulani (Muslim nomad). We pray to God that the farmer is good. We asked Fulani for help and tell him we are from Chibok. He and his wife give us food and a place to wash. We eat and sleep, and in the morning he takes us to the road and points the way.

“We start running and when we are running a long time we meet a man on the road and ask him, ‘where is Chibok?’ He says it is very far, but he has a friend who will take all of us on the back of his bicycle (motorbike) to Chibok.

“When we get to the market,” Eve threw her hands down as if she was erasing the memory, “everybody just went back to their own house.” She rubbed her forehead and then finally smiled again. “That is the end of my story.”

Two additional points: First, it is likely that during the first 48 hours of captivity, some of the 276 girls were suffered abuse and injury. Second, many houses have since been burned by the Boko Haram and their families have fled into the bush. Thousands of displaced families are in hiding because of their Christian faith.

Rep. Wilson and her staff were genuinely gracious and obviously very moved by Eve’s account. Ogebe and Wilson discussed the crisis at length and Wilson stated she intended to continue her efforts to halt the Boko Haram and assist the girls of Chibok. True to her word, she is working on legislation to do both.

Please join me on Friday for Sarah’s story and the conclusion in part 3 of 3.

For more information on how you can help the rescue efforts please contact Jubilee Campaign.