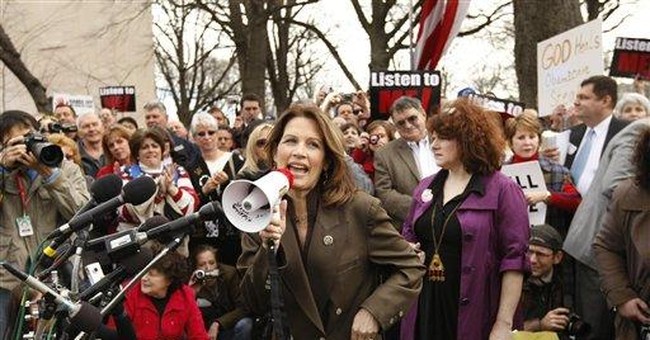 The “Code Red” health care protest near the U.S. Capitol on beautiful Tuesday morning was a familiar and comfortable scene. Older gentlemen with signs and young women with children milled around and chanted responses to the speakers at the podium, who provided the latest round of reasons why Obamacare was bad for America.

This time, it seemed that Democrats were a little more wary about their presence. House Speaker Nancy Pelosi issued a memo to her caucus in anticipation of the event, characterizing the attendance as responding to the "caricature of the reform bill presented by right-wing media outlets."

That wasn’t the characterization of the bill as provided by the lineup of speakers, including Republicans who have had a longstanding presence in the debate: Tom Price (Ga.), Michele Bachmann (Minn.) and Joe Wilson (S.C.).

“Speaker Nancy Pelosi actually said last week that we need to pass the bill so we can find out what’s in it. I say, Mr. President, Madam Speaker, the American people know what’s in the bill, they just don’t want it,” said Rep. Mike Pence (Ind.).

As the protest went on, news broke that at least one Democratic member--Rep. James Clyburn of South Carolina--thought a vote on the health care bill may be pushed back until Easter. Rep. Marsha Blackburn (Tenn.) offered her own thoughts on why Democrats may decide to delay the vote.

“Today hundreds of Americans are walking the halls of this building asking us to stop and take reform step by step and structure a system that lets them out of this broken system, not locks them in perpetually,” she said. “I hear them Madam Speaker, and I hope this chamber will too.”

After listening to the speakers, the several hundred protesters moved from the lawn of Taft Park to district offices to try and talk to waffling Democrats. The number of votes nailed down by Pelosi as "yes" was still uncertain.

The protest had all the telltale signs of the tea partiers: Revolutionary War re-enactors, witty signs and caricatures of President Obama. The day was crisp and sunny, and it was clear that despite the involvement of a number of conservative political groups, these people were there because they wanted to be.

“Leadership has contemplated one method after another to pass this legislation. First it was the threat of reconciliation, then it was the kickbacks to different districts, and now there is a possibility of passing it without actually voting on the entire measure,” said Bachmann. “This Congress is full of tricks, but the American people are tired of being lied too."

Rep. Joe Wilson had similar remarks. “You have made a difference,” he said. “The liberals planned on passing a health care takeover in July with a bill signing in August – all without the American people knowing the details of the bill. “What a difference you have made.”