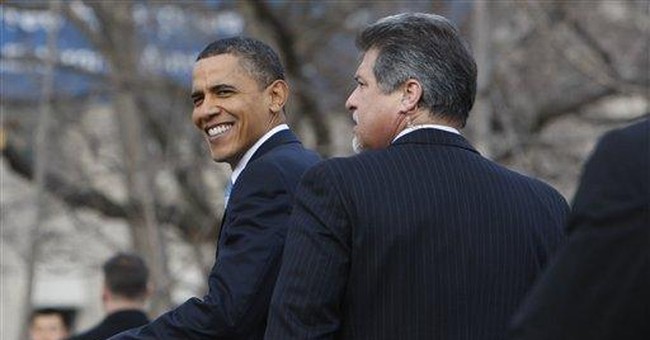 Obama stacked the deck during the health care summit, giving Democrats twice the speaking time as the GOP. But how well did Republicans punch back?

Depends who you talk to.

“I think we need to start out by acknowledging Republicans brought their ‘A Team.’ They had doctors knowledgeable about the system, they brought substance to the table, and they, I thought, expressed interest in the reform,” wrote The Hill’s A.B. Stoddard. “I thought today the Democrats were pretty much on their knees.”

That wasn’t the only opinion.

“Republicans aren't being tough enough,” said Quin Hillyer of the American Spectator. “GOP politicians, here and in most forums, just don't know how to ask questions in a way that makes their points best. It really is painful.”

It’s clear that Republicans were on the defensive – but there really wasn’t another option, given the structure of the debate, said Tim Phillips, president of Americans for Prosperity, who is fighting the Democratic health care bill.

“When the President of the Untied States says, I want to talk about this issue, you have to listen,” said Phillips. He thought that Republicans managed to hold their own, and do the best they could given the circumstances.

President Obama made himself moderator and speaker-in-chief – talking just as much as members of each party. But given the total speaking time allowed, those GOPers needed to make their points much more quickly – and with much less detail – than their Democratic colleagues.

House minority leader Rep. John Boehner (Ohio) was one of the main GOP attendees to rebut some of the points put forth by Obama. During the last session of the day – a session designated by the President to discuss entitlements – Boehner complained that a government takeover of health care that would bankrupt the country. Here’s how the President responded:

“Right now, what we’re doing is focusing on the issue of federal entitlements. I will come back to you at the end of the session to answer the range of questions you just asked.”

The President never did.

Sen. Jon Kyl (R-Ariz.) tried to get into some details during the first session, citing specific figures regarding health insurance costs in different insurance plans. But he spoke quickly, because he knew the Obama was trying to interject – which Obama did, cutting Kyl off with a story about his college years.

Sen. John McCain (R-Ariz.) tried to bring up the point of reconciliation and political will to pass the health care bill.

“Americans aren’t all that interested in procedures inside the Senate,” replied Obama. “They are interested in how we’re going to move this issue along for a vote.”

“I thought the president looked testy, and frankly unpresidential, when he attacked McCain,” said Phillips. “McCain was making a pretty reasonable point, and Obama attacked him in a very personal way. I think Republicans played it about as well as they could.”

But Chip Hanlon, editor of the site RedCountry.com, thought there was more room for improvement on the Republican side. He noted that when Sen. Max Baucus (D-Mont.) went on a detailed rant about costs, Republicans just sat pretty.

“Our side isn't fighting, it is actually – astonishingly – negotiating! The appropriate response to Baucus' remarks would have been to interrupt him, reminding him that our side does not even agree on the Democrats' basic premise: that government has a role in the providing of healthcare,” wrote Hanlon. “Instead, the viewer is left to assume--what?-- that maybe the Republican heads on the other side of the table were nodding right along with this assertion from Baucus?”