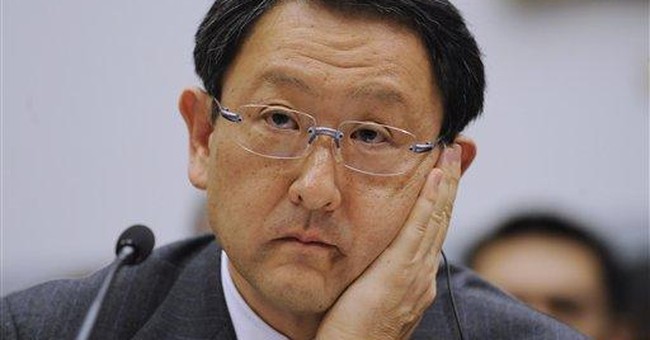 The Toyota show trials are more like an episode of Judge Judy than an actual investigation by Congressional committees. Sitting in for the esteemed TV judge is a cadre of Democrats who's interest in nailing Big Business and protecting union constituencies can barely be hidden behind a wall of teary witnesses and flimsy conspiracy theories.

Before members of Congress even questioned CEO Akin Toyoda, they gave lengthy statements that accused Toyota of hiding evidence of malfunctions and endangering drivers. Then came the tear-jerking testimony of traumatized Toyota owners, the eleventh-hour departure of a Democratic congresswoman on the Committee after her connections to Toyota were publicized, and the incestuous analysis of auto journalists and consumer advocates.

Not heard was the testimony of certain automobile representatives, industry analysts, and National Highway Transportation Safety Administration officials who raised eyebrows at the hasty condemnation of the automaker while no less than two other carmakers have issued recalls at the same time – without any attention from the government or the public.

Just this week, both Hyundai and Chrysler recalled nearly half the number of cars Toyota has, but received about a millionth of the media attention.

“It just seems like [the response] is totally blown out of proportion,” said Brian Johnson, executive director for the Alliance of Worker Freedom. “Where were they when the millions of GM and Ford Explorers were recalled?”

Indeed, there were no hearings for GM or Ford in 2001, or for the Hyundai or Chrysler recalls happening now. There’s only a hearing for Toyota. And during it, Democrats were lining up to condemn the company for everything short of blowing up America.

“Toyota all but ignored pleas from consumers to examine sudden unintended acceleration incidents [SAIs]. They claim that they first became aware of sticking pedals in late October of 2009, when in fact they received numerous complaints many months and years earlier,” said Bart Stupak, chairman of the Oversight and Investigations Subcommittee, during the investigation.

That’s true, but as reported earlier, those complaints were hard to evaluate. SAIs are frequently caused by careless or drunk drivers who misplace their feet – who are anything but eager to admit wrongdoing. Stupak also didn’t mention the fact that 84 SAIs had been registered with Toyota, while the Chevy Cobalt was subject to a whopping 1,157 SAI complaints – without any action taken.

Yet Democratic lawmakers are raising the roof over what Toyota knew and when they knew it, an complicated by not only the ambiguousness of SAI complaints, but also cultural issues, said a former senior official at NHSTA. Because Japan maintains ultimate authority over Toyota decisions, all NHSTA compliance negotiations must go through formal international meeting procedures. American carmakers often negotiate compliances through ongoing, cooperative relationships with the NHSTA.

But the fact that Japan maintains tight control is also the reason automaker have become one of the most profitable manufacturers in the industry, supplying the U.S. with thousands of jobs.

“Toyota employs over 35,000 workers in the U.S.,” said Johnson. “The reason they’re able to do this is because they’re a highly efficient, non-unionized company” – who’s main business plan is worker independence.

Whether those jobs are the right kind for Democratic Congressional interrogators is yet another heated issue in this boiling debate. Stupak, who is heading the Congressional inquiry, represents Michigan – the one state that stands to benefit most from the downfall of a foreign car company. Sen. John Dingle (D-Mich.), is also standing in for some questioning, along with Sen. Henry Waxman (D-Calif.), an outspoken bailout advocate and Obama ally.

“Waxman and Dingle are totally dragging Toyota through the mud on this. There’s a clear violation of the government’s own non-compete clause,” said Johnson, alluding to the recent $25 billion bailout of Detroit.

Johnson pointed out that Mr. Toyoda had three reasons to blame for SAI incidents: the driver, sticky pedals, and floor mats. Transportation Secretary Ray LaHood – the man primarily responsible for the safety of American drivers – blamed sticky pedals and floor mats. Yet Waxman called again and again for an investigation into the electrical issues with Toyota’s acceleration systems.

If such electrical issues existed, it would be in the best interest of both Toyoda and LaHood to recognize it. The PR fallout associated with highly-publicized, questionable business practices are worst possible scenario for a manufacturer of any kind. The only way to avoid that is to play by the rules, and keep consumers safe.

Playing by the rules is Toyota’s forte, and except for thirty-four fatalities – out of 37,000 fatalities on American roads last year – Toyota has kept consumers safe. But during a screamy show trial, those kinds of facts tend to get lost.