CPAC Packs It Up 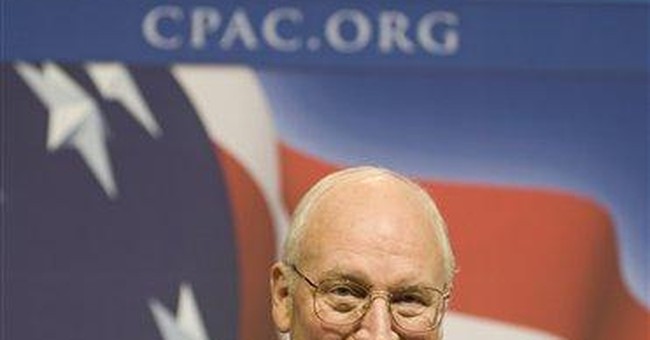 Life-size posters of Reagan dotting the halls. Full-body duck and whale mascot costumes to illustrate energy solutions. And, of course, the reenactment soldiers, trotting around in Revolutionary War military uniforms.

These are only some of the golden nuggets of the CPAC convention that make it the most kitschy, yet endearing, headliner convention of the conservative movement.

"I came here to meet people, because the panels are mostly soundbites," said Colin Popell, who came to CPAC from the Rensselaer Polytechnic Institute in Troy, New York. "There's a lot of stuff I don't necessarily agree with."

Popell calls himself an "old-fashioned Republican," who is more concerned with fiscal responsibility and states' rights than anything else. He said the most interesting part of CPAC came on Saturday night, when he attended a date auction by Ladies of Liberty Alliance, "known for their brilliant yet beautiful yearly calendar."

There, Popell found a young man sporting red hair, wearing an "End the Fed" shirt and leather jacket, who was drunkenly yelling "end the fed" over the sound of the auction announcer. The auction raised $3,000.

Popell and the legions of other college students seemed to have one thing in common: a conservative cause, and the desire to have fun.

"I ran into Dick Cheney on the elevators," said Chris Cloomey, a freshman at Stony Brook University in Stony Brook, New York. "I got to interview Rachel Maddow, it was really great."

At that point, an unidentified friend ran up to Cloomey, and yelled "It's Newt Gingrich!" Both Cloomey and friend sprinted away from this reporter.

Chris Silbe, a senior at the University of Northern Colorado, went to a dive bar and paid thirty bucks for a cocktail on Thursday night after watching some of the speakers. The drink was great, but he wasn't really sure which bar or which area of Washington, D.C. he was in.

"I really just came here to see Washington, D.C.," said Silbe. "But it's cool to see [CPAC] people come together for a common cause."

The final day — Saturday — of CPAC, saw addresses from John Bolton, Rick Santorum, Ann Coulter, and Glenn Beck. The speeches ranged from grave seriousness to over-the-top humor, and record crowds packed the auditoriums. CPAC was certainly demonstrative of the differences that the GOP actively struggles with: fights between mainstream Republicanism and tea party conservatism raged like wildfire. But despite these differences, most everyone agreed that CPAC was the place where those differences could be put on the shelf.

Speaker after speaker reiterated the fact that disagreement was an expected, and normal, undercurrent of political discourse. Participants said the same thing. Nick Spanos ran a booth for his internet domain company Voteclick.com.