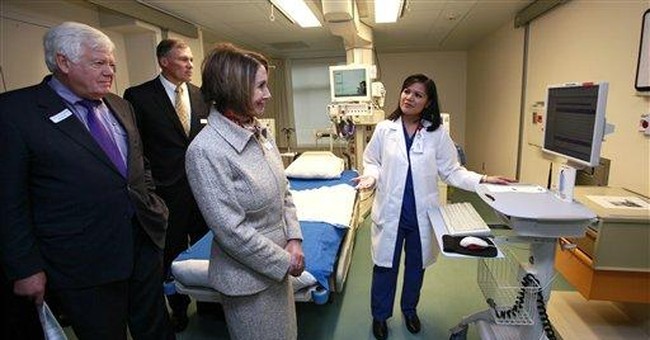 Moderate democrats. Women. The elderly. Politicians. Voters. Whoever you are, you’re probably being targeted like a laser by health care lobbyists about your allegiance on health care legislation.

Those lobbyists aren’t medical organizations or arms of political parties. They’re traditionally non-medical entities like Moveon.org and seniors activists. They’re launching unprecedented campaigns to try and attack politicians and constituents for their beliefs on this controversial issue. And they’re concentrating high-dollar expenditures on swing races in the 2010 mid-term elections.

The 60-Plus Association is the first Republican group to join the fray. 60-Plus is targeting Earl Pomeroy, a Democrat from North Dakota, along with at least half a dozen other Representatives, for their “yes” vote on Pelosicare.

“I don't want the government choosing my doctor. Or telling me I can't have the tests I need. North Dakotans won't forget,” the ad says. 60-Plus has committed $2 million in the past to trying to defeat health care; now that it’s passed the House, their priorities are still the same.

“President Obama shouldn’t be scaring seniors with the threat of Washington bureaucrats refusing care or making health care decisions instead of your doctor,” said Jim Martin, President of 60-Plus.

MoveOn.org’s main web page has been transformed into a pitch for constituents to contact their Representative, depending on that Representative’s health care vote.

“This is the first time a health care bill has ever passed the House,” it reads. “How did they vote? Click here! Health care for America now!”

MoveOn.org is currently trying to raise funds for a $3 million buy, after taking out radio ads targeting moderate Sens. Blanche Lincoln and Mary Landrieu, both Democrats from Louisiana.

Lincoln and Landrieu are an important demographic not only because they’re in swing districts, but because of their sex. Women are widely perceived as being more amenable to health care reform, despite polls that show they’re just as undecided – or even more against reform – than men are. First Lady Michelle Obama has been lobbying female legislators before the health reform bill even emerged from Congressional committee rooms.

Perhaps the biggest pull is coming from liberal groups who are lobbying moderate Democrats on their impending vote. The Progressive Change Campaign Committee, Democracy for America, and the Service Employees International Union are the biggest groups in this area. SEIU spent $100,000 in the NY-23 race for successful Democratic candidate Bill Owens, and the group is prepared to drop even more than that when 2010 rolls around.

The man in charge of getting Democrats elected to Congress says their money may be well-spent. Democratic Congressional Campaign Committee Chairman Chris Van Hollen (Md.) said last week that he was confident in his party’s chances – as long as health care reform was passed.

“The political fortunes of the entire Caucus are tied together in getting this passed,” he said at a conference at Bloomberg’s Washington Summit.