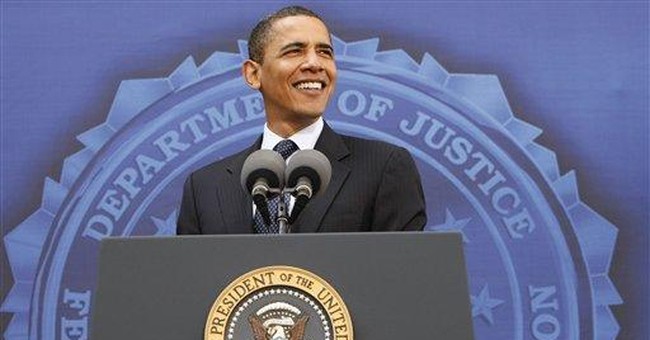 The sharp difference in opinion illustrates one of Obama’s most defining characteristics thus far: partisanship. Obama’s approval rating (63%) are two points under the 100-day average for the past ten presidents. Yet 87% of Democrats approve of him while only 37% Republicans do.

“Barack Obama has the most polarized early job approval ratings of any president in the past four decades,” reported the Pew Research Center, noting that growing partisanship has been a trend in American politics over the past few decades.

But Obama is ahead of his predecessors. Former President George W. Bush, for example, was nearly ten percentage points less polarizing than Obama at this point in his Presidency.

That didn’t stop Democrats and liberal media from pouring on the praise, with David Broder calling Obama’s first 100 days “a bravura opening.”

“If Obama's history-making campaign offered hope, the nation's first black president has delivered audacity; his vision of an activist government has been so vast, Washington now guarantees not only savings accounts but brakes on a Buick,” wrote Faye Fiore and Mark Z. Barabak in the Los Angeles Times.

Compare that with the sentiments of Rep. Mike Pence, chair of the Republican Study Committee:

“The reality is that we have seen some of the most partisan, one-sided, lopsided legislation in my short tenure in the Congress of the United States,” said Pence. “In many ways it is altogether fitting that this President would mark his first 100 days by signing the most fiscally irresponsible budget in American history into law.”

Conservatives point to Obama’s fiscal record as one of their main points of contention. Despite calling for absolute earmark reform, the President signed a spending bill with over 8,000 earmarks in it on the 51st day of his Presidency, according to research by Americans for Tax Reform. ATR also points to the numerous tax scandals in which Obama appointees have been embroiled and his hypocrisy on taxes.

“Signed into law back on Feb. 4, on just the sixteenth day of his presidency, the 156 percent–61 cents per pack—cigarette tax increase falls largely on the shoulders of middle and low-income Americans,” wrote ATR. This contrasts with Obama’s statement that no Americans who make less than $250,000 will see a tax increase. Experts also say that not increasing taxes will be difficult after increasing federal spending by 8% over last year.

The Heritage Foundation issued a judgment on Obama’s foreign policy after the first 100 days. Despite commitments to reduce troop sizes in Iraq over the summer, Obama has not yet reversed the course of the previous administration in the Middle East, something senior research fellow James Jay Carafano says “makes sense.”

“Presidents must keep the nation safe, free, and prosperous for four years, not 100 days. The White House has a lot more work to do,” he said.