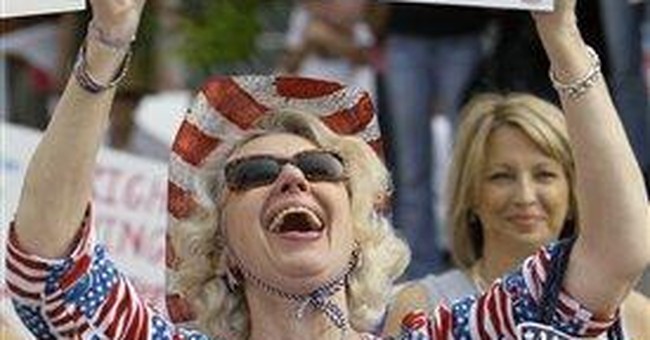 Some, like Drew Ryun, board member at a political training institute called American Majority, are using the tea party movement to get more people on board for future political work – benefitting not only the conservative movement, but their particular organization.

“We love the fact that there was a lot of passion out there, we’re seeing conservatives rally and protest, which is something conservatives don’t do,” said Ryun. “The question when we return to the community is ‘now what?’”

Ryun’s answer is for enthusiasts to sign up on AM’s website, aftertheteaparty.com, which serves as a portal for AM campaign workshops. It has garnered 2,000 email addresses since Wednesday.

Mike Leahy, co-founder of the organization Top Conservatives on Twitter, wants supporters to attend eight other tea parties leading up to the next presidential election. He says that the April 15 tea party efforts are the direct result of TCOT and three other groups, and that multi-protest master plan was a “strategy from the beginning.”

“Our four grassroots organizations organized the entire day through a combination of communications and conference calls, providing centralized information that allowed for what it looks like 900 local leaders to organize their own tea parties,” he said.

Leahy’s groups did manage the website used for much of the tea party organizing – taxdayteaparty.com. But J. Peter Freire, managing editor for the American Spectator magazine and one of the main organizers for the DC tea party, said that website was the only benefit of those groups’ coordination.

Freire thought the main point of the tax day tea parties was to promote grassroots activism that didn’t come from any one person or group.

“I think that what’s most important is getting regular citizens and taxpayers to show up at Townhall meetings and start saying ‘stop spending out money.’ I don’t know how an organization would do that,” he said.

As of Thursday, many groups were indeed stepping up to the plate to try and coordinate. In addition to the efforts put forth by American Majority and TCOT, Americans for Prosperity was out of the gate organizing a tea party on October 2nd, when they expected the final debates to occur over Obama’s budget. It was unclear as to whether or not this protest was coordinated with TCOT’s planned protests.

Americans for Tax Reform leader Grover Norquist called for tea party organizers to email his organization so a list could be compiled on his website.

“Take a look at this growing list of tea parties and number of attendees – if the tea party you took part in is not currently listed please email us,” he said in a press release.

In addition, Americans for Limited Government put out a press release with President Bill Wilson calling for more action: “Now Americans everywhere must become recruiters, organizers, and list-builders.” Exactly what action was expected was not detailed, but Wilson was available for interviews about it.

John O’Hara, a key player in the Chicago-based and national tea party efforts, said that this lack of organization among different groups could benefit conservatives in the long run. The appeal of decentralizing authority when it comes to post-tea party action is that any future efforts are natural, instead of forced.

“In sharp contrast to much of the activism coming from the left, attendees and organizers were not paid provocateurs – they are hard working taxpayers of all political stripes,” said John O’Hara, a membership manager for the Heartland Institute. “These citizens took the time to speak out against runaway government spending and unprecedented government expansion into the private sector.”

Jon Henke, a conservative political blogger at TheNextRight.com, echoed his sentiments. Henke works as an internet strategy and communications consultant for DC Signal, and said that the main benefit to any central authority would be voluntary email lists, as opposed to “impersonal blasts they would get from any national group.”

In other words, the disorganization of post-tea party plans may be the best possible scenario.