Jerry Rogers
|
Posted: Mar 31, 2020 12:15 PM
Share   Tweet
The opinions expressed by columnists are their own and do not necessarily represent the views of Townhall.com. 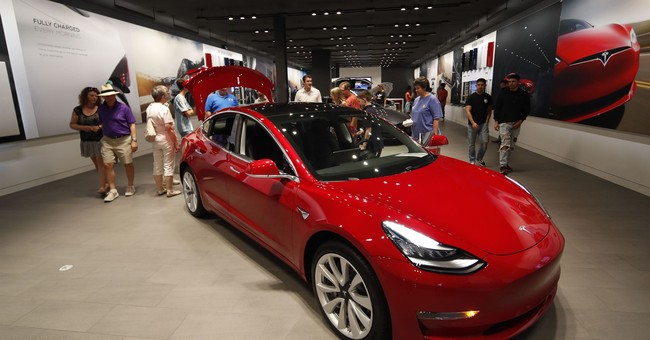 America is at a standstill. Each passing hour brings a new sense of anxiousness in what lawmakers and public health officials have to say about the ongoing pandemic. From 24 hours a day news coverage to multiple White House press briefings, transmitting information is absolutely critical to public safety. Indeed, we cover breaking COVID-19 news in real time during my weekday talk radio program, including pressers from all levels of government.

We’re in uncharted territory—unprecedented in American history. Our national health—both in terms of the economy and public health—is in jeopardy, and the American people need information, facts, and data in real time.

To this end, the Trump administration recently began workingwith major media companies on a public service announcement campaign to keep the public healthy and informed. This action has been crucial as the nation deals with the growing viral threat of COVID-19.

Unfortunately, however, some carmakers have undertaken action that could jeopardize the success of the president’s coronavirus PSA campaign and limit consumers’ access to critical information in this time of need.

For example, this month Tesla announced that it is offering “upgrade packages” for some previous models that will drop their in-car radios,  despite those radios being one of the only ways the government can reach every point in the country.

America was raised on radio, and now—in the midst of a national emergency—is not the time to take it away.

Former Federal Emergency Management Association (FEMA) Administrator Brock Long heavily criticized the actions of those carmakers that have taken AM radio out of their cars, particularly the electric vehicle makers, who cite interference from the engine to AM signals. He stated that for the sake of national security and public health, they must make their systems compatible. Since then, however, Tesla has even begun taking away FM as well, so it’s unclear what the motives of these companies truly are.

Nevertheless, with the influx of changes from both state and federal governments rushing in, a reliable communication network is essential. Just over the last week, our nation has seen a rollout of quarantine provisions, business shutdowns, and medical directives. Not since 9/11 has it been this critical to stay connected to our government.

The government is heavily relying on The National Warning System (NWS) in these difficult times to connect with the public. Powered by radio, it is the most effective, reliable tool the government has in informing the citizenry of critical health and safety information.

Much of this reliability stems from $100 million in investments from FEMA over the past few years. They now have an ample supply of long-term backup supplies and power that ensures connection to over 95-percent of the population no matter the circumstances.

If car companies like Tesla continue with their plan to eliminate radio, they will put millions at risk by cutting off the country’s most effective form of communication, forcing the government to attempt to develop new solutions. It should be carmakers that innovate to meet public needs, not the other way around.

Not only will communicating with people be more difficult, but the government will need to invest millions in new infrastructure to support it with no guarantees of its effectiveness. At a time when all resources should focus on preventative measures to contain this virus, the country can't afford to do so.

No one is arguing against advancing automotive technology, but the current action of Tesla should give everyone a great deal of concern. Unless significant changes happen soon, they are risking cutting people off from our well-functioning alert system with no assurance of a suitable replacement. During a pandemic like this one, that's wholly unacceptable.

By partnering with media companies for a PSA campaign, the Trump administration has taken sensible steps to keep the country safe and informed during this epidemic. Now, it is time for the automakers to do the same by ensuring that the emergency communications infrastructure that the government and its citizens rely upon remains effective and does not go to waste.