Jerry Newcombe
|
Posted: Jan 10, 2018 3:25 PM
Share   Tweet
The opinions expressed by columnists are their own and do not necessarily represent the views of Townhall.com. 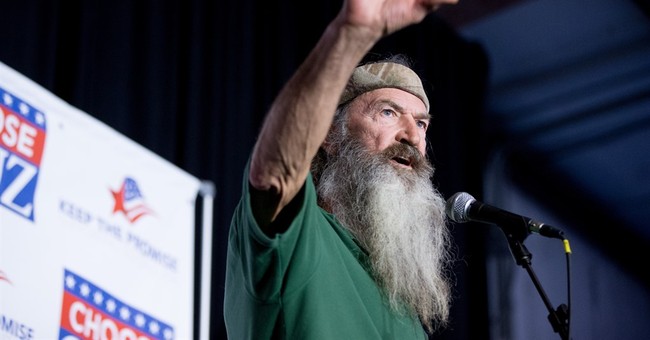 I saw an ad recently for the new television program of Phil Robertson of “Duck Dynasty” fame. It airs on CRTV (the same network Mark Levin and Michelle Malkin appear on). It’s called “in the Woods with Phil,” and he’s “declaring open season on political correctness.”

I did an interview with Phil Robertson a few months ago for my radio show, where he commented on a variety of issues from his unique perspective. Here is some of Robertson’s wisdom from that interview, on issues ranging from abortion to the true motive of the Las Vegas shooter; from President Trump to religious liberty in our time. In bold are the issues I asked him about. The quotes that follow are his answers.

The new TV Show in a nutshell

“It’s basically how to be godly in a very ungodly world….I’m trying to get people to do two simple things---love God and love their neighbor. It’s sorely needed.”

The motive of the Las Vegas shooter

“Well, a lot of people are wringing their hands because when they research this guy, they’re thinking, ‘Well, what kind of ideology did he have?...There has to be a motive.’….Guys like that shooter---gets up 32 floors and shoots down on a group of individuals he has never met, those people had never harmed him in any way---you say, ‘Why would he do that? What’s his motive?’ What the United States of America and what the world needs to understand is: Satan is the motive when people do [things like] that. He motivates people. Jesus called him the father of murder. He’s the father of murder and the father of lies. Therefore, when you see murder and when you see lies, the evil one is there….The shooter was motivated by Satan himself, and that’s why the people were slaughtered.”

Restrictions on religious freedom in our time: Such as tearing down public displays of religion or forcing bakers and florists to violate their conscience

“We’re not wrestling against the human beings. We’re wrestling against the evil one in the human beings. So we try to get them to come to Jesus, repent, so they can be set free from the evil one….It’s spiritual warfare, my man, at a high, high level. And all the erosion of our religious rights and all of those things---that is from the evil one working in and through [people]. Remove the Ten Commandments from the courthouse. Think about it. Take the Ten Commandments out of the courthouse---‘children, honor your father and mother;’ ‘don’t murder;’ ‘don’t commit adultery;’ ‘don’t steal;’ ‘don’t lie.’ When we violate those Ten Commandments, they take us [back] to the courthouse. That’s where you end up when you violate them, and that’s where they removed them.”

His thoughts on abortion

“All they did was move the line…[Seven] judges said, ‘Well, I know it says, ‘Don’t murder’ (Commandment # 6), but if we just move the line a little bit, then we’ll say at 21 weeks they really aren’t viable, they really aren’t human beings. Then at 22 weeks, they’re almost viable. almost there---all they did, Newcombe, was move the line….It is dastardly, brutal. It’s like throwing your children in the Old Testament to Moloch.  [Moloch was a Canaanite god that demanded human sacrifice---including the sacrifice of babies.] They slaughter their own offspring in front of God, and then they look up and say, ‘We’ve done nothing wrong.’”

His take on the NFL National Anthem protests

“I think it’s from lack of training at early ages….I taught my four boys to respect the flag of the United States, the National Anthem, old people---you get up and you give older people your seat  I taught them, no matter what their teachers said, their teachers were their teachers, so you say, ‘Yes, Ma’am’ and ‘No, Ma’am’”

His views on the job President Trump has done so far

“I call it ‘pontificated cr*p’….Once you replace biblical correctness with political correctness, it’s just a ploy that the evil one uses....How in the world could you add a word after ‘political’ and make anything about it ‘correct’? It’s not a political fix in America [that’s needed], Newcombe. It’s a spiritual fix.”

In short, America is suffering from a moral and spiritual malaise, not a political one. And Phil Robertson is doing his part from his neck of the woods to call America back to God.