Praising Allah at the National Cathedral 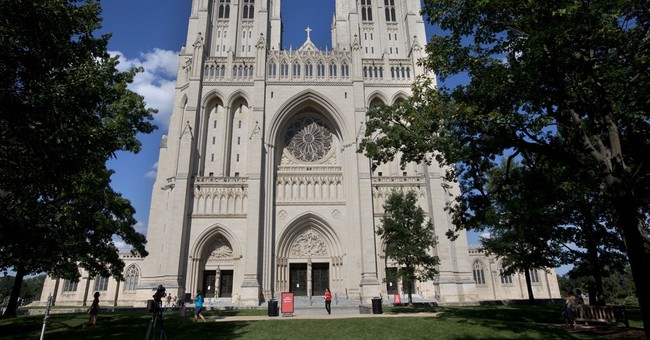 Recently, I had the privilege to visit the National Cathedral in Washington, DC. Someone asked me, "What were you doing there?" My response: "Worshiping Jesus Christ."

Before and after the beautiful service, it was a delight to walk around and see what's there---such as the stone sarcophagus of Woodrow Wilson, with just his name and the years of his birth and death. He died in 1924. The cathedral was built in 1907. This was the only presidential grave I saw there in my abridged, unofficial tour.

The National Cathedral is part of the Episcopal Church. It is not officially part of the U. S. government, in that we have “no establishment of religion” in America. By design. A good design. The founders wanted to make sure there would be no religion “by law established” in America at the federal level.

That does not mean the founders did not welcome the acknowledgement of God in public life. After all, the same men who gave us the First Amendment set up the chaplain system and paid clergymen to serve in the legislatures and military. By design. A good design.

There were many things to see at the cathedral that fascinated me---reminders of our nation's rich Christian heritage. There is a huge statue of George Washington, the lifelong Anglican, who said in his Farewell Address that “religion and morality” are “indispensable supports to our political prosperity.” He also said that morality cannot be maintained without religion. (He said it at a time when about 99% of the country was professing Christians.)

How sad, then, it was to learn that the National Cathedral recently invited a Muslim imam to praise Allah in an official worship service there.

One report noted, “The planners say this is the first time the cathedral has invited Muslims to lead their own prayers there, which they call a ‘powerful symbolic gesture.’''

Columnist Robert Knight, in his article “A Brave New World of Intolerance” (Washington Times, 11/17/14), notes: “The cathedral, indeed, sent a powerful message---of weakness. Many Muslims will see it as akin to raising their flag over a conquered enemy.”

The imam came and said his prayers there last Friday (11/14/14). Meanwhile, the officials kicked out a brave, unruly Christian lady who was objecting out loud to this event.

It is ironic to me that on the day I write this (11/17/14), I received an email from Christian Concern out of England on their plan to “launch an initiative to help protect those in the UK who want to leave Islam but fear the consequences of doing so.”

They write: “Entitled 'Safe Haven', the project has been launched in response to the brutal treatment in the UK of some who have left Islam and become Christians.” Some of those who will participate in their campaign on 11/18/14 include former Muslims who have converted to Christianity. According to strict Muslim law, the penalty for leaving Islam should be death.

One of those ex-Muslims who plans to testify for “Safe Haven” said, “My own family would rather see me dead.” In short, tolerance toward someone else’s religion seems to come only from the Christian side of the fence, but never the other side, where “tolerance” is crushed under the bulldozer of a totalitarian ideology.

America is a free country, and if the Episcopal Church wants to invite an imam to say prayers at the National Cathedral, who can stop them?

But are these professing Christians pleasing the Lord? Jesus Christ said, “I am the way, the truth, and the life. No one comes to the Father but by Me.” I’m sure their answer would be something like: “Tolerance. That’s why we invited the imam. We all worship the same God anyway.”

G. K. Chesterton once said, “Tolerance is the virtue of the man without convictions.”

The aforementioned Woodrow Wilson, whose body is entombed at the National Cathedral, said in a 1911 rally in Denver: "A nation which does not remember what it was yesterday, does not know what it is today, nor what it is trying to do. We are trying to do a futile thing if we do not know where we came from or what we have been about..."

In the same speech, he said, "America was born a Christian nation. America was born to exemplify that devotion to the elements of righteousness which are derived from the revelations of Holy Scripture."

Too bad the powers that be at the National Cathedral seem to be oblivious to what Washington or Wilson or, more importantly, Jesus has had to say. I’m reminded again of a quote from Chesterton: “These are the days when the Christian is expected to praise every creed except his own.”