The Essence of Liberalism 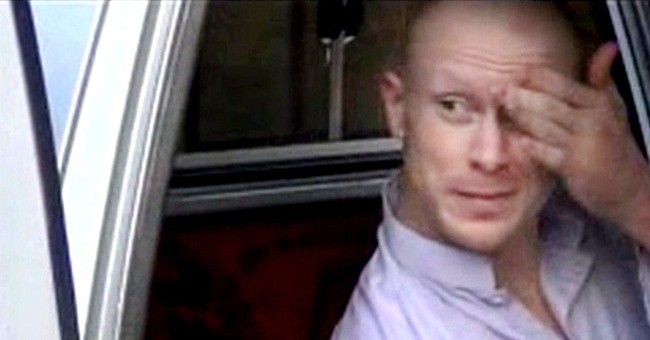 As the fallout from the Bowe Bergdahl swap for five Taliban prisoners of war continues to reverberate, there’s a fascinating statement from one MSNBC host on the subject.

On 6/4/14, “Now with Alexander Wagner,” the MSNBC host said she hoped the swap may lead to “broader negotiations” with the Taliban. (Hat tip to newsbusters.org).

“Broader negotiations” with the terroristic Taliban? Reasoning with those who have proven themselves incapable of humane reasoning?

This got me to thinking: What is the essence of liberalism? Is it elitism---the notion that big government can take better care of you and yours than you can?

Is the essence of liberalism the abolition of private property? Is it that people should have the freedom to do whatever they want to, to define their own right and wrong?

I think all these things are corollaries, no doubt. But in my view the essence of liberalism begins with a flawed premise, a flawed anthropology, that says that man is basically good.

In the liberal view, we can negotiate with the Taliban, even though they want to kill us unless we convert to their brand of Islam, because deep down they’re good.

In 1938, British Prime Minister Neville Chamberlain could proudly declare there will be “peace in our time” because he had the signature of “Herr Hitler” to prove it. Subsequent events in World War II proved him stupendously wrong.

The problem of liberalism is that it doesn’t recognize the biblical truth, proven repeatedly in history, that man is sinful and that the best form of government recognizes that and therefore separates power, so no individual or oligarchy can amass too much of it.

Why has America historically succeeded in granting us freedom? It’s because the founding fathers recognized this fact. They did everything in their power to limit how much power any one man or group of people might have.

The Bible is very clear. It does not teach that we are perfect, but rather that we are sinful. Jesus said, “If you then, who are evil…” Paul said, “There’s no one good, no, not one.” Jeremiah noted, “The heart is deceitful above all things, and desperately sick; who can understand it?”

Mankind tends toward evil. Therefore, power must be separated. I am not aware of a single example of any of the founders of America believing that man was basically good. This is not cynical. It’s just the reality and has led to the most prosperous forms of government—and economics too.

Like the other founders, Thomas Jefferson said that power should be divided for everybody’s sake: “The way to have good and safe government is not to trust it all to one, but to divide it among the many…” No phone and pen there.

James Madison said, “All men having power ought not to be trusted.”

Ben Franklin said, “There is scarce a king in a hundred who would not, if he could, follow the example of Pharaoh, get first all the peoples’ money, then all their lands and then make them and their children servants forever.”

Alexander Hamilton wrote, “Til the millennium [when Jesus reigns on earth] comes, in spite of all our boasted light and purification, hypocrisy and treachery will continue to be the most successful commodities in the political market.”

In the early 20th century, Christian apologist G.K. Chesterton once wrote a letter to his newspaper on “what’s wrong with the world.” His essay was only two words: “I am.”

There’s a link between correct anthropology and good government. Those governments, like that of the U.S. (as the founders envisioned it), have given freedom because the founders acknowledged man’s corrupt nature.

In contrast, the former Soviet Union, as an opposite example, built their system of government on an atheistic, Marxist base—on the notion that man is basically good, but corrupted by capitalism and religion. Marx thought when the workers seized the means of production and the reins of government and imposed the worker state, then government would become unnecessary and wither away.

So the new Soviet man or woman was to be free from religious superstitions and from the curse of selfishness as found in capitalism with its emphasis on private property. Who created a better system? The communists or America’s founders? The answer is obvious.

Historian Paul Johnson said the 20th century state, in large part because of communism (which asserted the basic goodness of humanity) has proven to be the greatest killer of all time.

No wonder God sent a Savior to save us from our sins. Meanwhile, deals should take into consideration man’s nature as it really is, and not as it should be in someone’s playbook.