God Is Not a “Psychotic Mass Murderer” 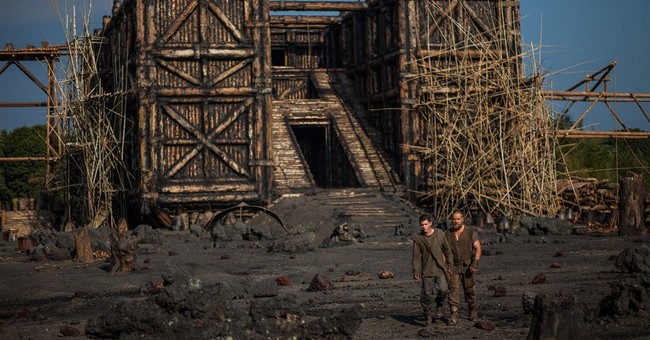 He said that in the upcoming Noah movie, God---not Russell Crowe (playing Noah)---had an anger problem.

On his HBO program on Friday (3/14/14), Maher said about the Noah story, “It’s about a psychotic mass murderer who gets away with it, and his name is God.”

He adds, “What kind of tyrant punishes everyone just to get back at the few he’s mad at?”

The “few”? The few were those who He wasn’t mad at---the ones He saved on the ark.

Maher also said, “Conservatives are always going on about how Americans are losing their values and their morality, well maybe it’s because you worship a guy who drowns babies.”

I was a guest four times on his show when it was on ABC. Bill Maher seems to hold to moral relativism. Therefore, he does not believe there is a real right and wrong. Then who is he to say that God was wrong to judge humankind in the flood?

Ironically, he uses a Judeo-Christian criterion of right and wrong to judge the God of the Judeo-Christian Scriptures. Yet that very God asks Job: Would you condemn me to justify yourself?

I’m glad Bill has discovered it’s wrong to kill babies, so he’s against abortion now. Oh wait. Implied in Bill’s complaint is that God was being unfair in His judgment. When God judges all of us, He will be completely fair and totally just. And therein lay our problem.

We all know instinctively that there is right and wrong. Certainly, our forebears knew that.

Thomas Jefferson wrote in Notes on the State of Virginia in 1781: “God who gave us life gave us liberty. And can the liberties of a nation be thought secure when we have removed their only firm basis, a conviction in the minds of the people that these liberties are of the Gift of God? That they are not to be violated but with His wrath? Indeed, I tremble for my country when I reflect that God is just; that His justice cannot sleep forever.” On this point, he was spot on.

On September 7, 1864, President Lincoln received a copy of the Holy Bible and said: "In regard to this great book, I have but to say, it is the best gift God has given to men. All the good the Savior gave to the world was communicated through this book. But for it we could not know right from wrong."

Here’s a newsflash to Bill Maher and any of his followers. The God of the Bible hates sin. While He is not accountable to us, we are accountable to Him. The Hebrew prophet Habakkuk said of God, “Your eyes are too pure to look on evil; you cannot tolerate wrong.”

I have not seen the upcoming Noah movie, and I understand by their own admission the producers have taken many liberties with the text. (With virtually Bible movies, it’s hard not to quip, “The book is better.”)

But [SPOILER ALERT] one liberty the producers have apparently taken with the text is that a character sneaks on the ark. Noah finds out and kills him! (This is in early versions seen in pre-screenings. Hopefully, the producers will cut it.) That implies that Noah and God were trying to keep people off the ark. But that’s not at all in the spirit or text of the Noah story.

The Bible says it took Noah and his sons 120 years to build the ark. That was a long time for his neighbors to see the storm coming---and repent, if they wished. It also says (in St. Peter’s second letter) that Noah was a “preacher of righteousness.” To whom? The animals on the ark? No, presumably to those around who could see the coming judgment as Noah was preparing the ark.

So to imply that Noah and God were trying to keep people from being saved is a sad distortion.

This reminds me of something Jesus said, right after He made the famous statement of John 3:16. (For God so loved the world He gave His one and only Son that whoever believes in Him will not perish but have eternal life). He said: For God did not send His Son into the world to condemn the world, but to save it.

The world is already condemned. For there is no one good. No, not one. But Jesus (who is fully God and fully man) lived a perfect life and then voluntarily received the due penalty of our sins on Himself. He became sin for us---and for that horrible moment---God forsook Him.

But God raised Him from the dead on that first Easter Sunday. He will one day come back to judge the living and the dead.

Noah’s ark is a symbol of the cross. You’re in or you’re out. Therefore, choose wisely.

It’s like the Passover lamb. Jesus was killed on Passover, the ancient Hebrew celebration when they took the blood of an innocent lamb (without breaking its bones) and put the blood on the top and two sides of their doorway (indirectly forming the sign of the cross). They were either covered by that blood or they were not.

It was interesting to note in the recent Son of God movie that as Jesus was being crucified in the background, you could see a Passover lamb being slain in the foreground.

750 years before Jesus, Isaiah said it all, “All we like sheep have gone astray...But the Lord has laid on him the iniquity of us all.” I pray for Bill Maher to see this one day.

With NY State Police Deployed to Deal with Rochester Riot, New Video Appears to Show Looters Beating Married Couple
Matt Vespa
Minnesota Gov Is About to Eat His Words on Who Is Really Causing Chaos in the Minneapolis Riots
Matt Vespa
The One Thing Riots Across the U.S. Have In Common – and It's Not Black Lives Matter
Beth Baumann
Buffalo Mayor to Rioter Who Destroyed City Hall: 'We Have You on Camera, You Idiot'
Cortney O'Brien