Myth of Xenophobia: Fighting Terror in the Face Brussels

Jeremiah Cuevas
|
Posted: Mar 23, 2016 8:01 PM
Share   Tweet
The opinions expressed by columnists are their own and do not necessarily represent the views of Townhall.com. 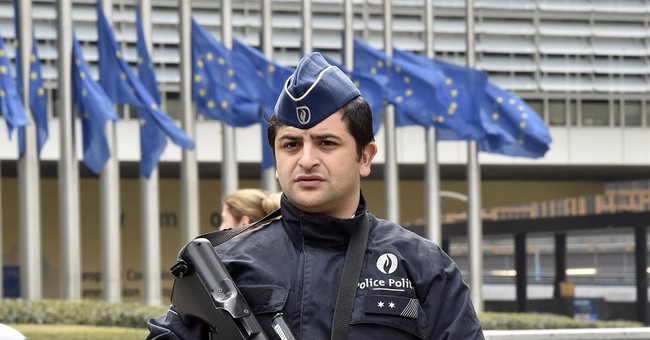 In the wake of the Brussels bombing earlier this week, the world is on notice that the threat of radical Islam is still very real. While in Cuba, Obama gave only 51 seconds of his time to speak about the tragedy that had occurred in Brussels, saying "This is yet another reminder that the world must unite. We must be together regardless of nationality or race or faith in fighting against the scourge of terrorism." However, after his speech instead of packing up his circus and meeting with European leaders trying to offer his support, our President remained basking in the warm Cuban sun and taking in a baseball game with Cuban leader Raul Castro.

Growing up many Americans are taught that if you are not part of the solution you are part of the problem. The American apologetics that Obama has been peddling all over the world do nothing to protect Americans. Standing over us and telling us that Islam is not the enemy does nothing to secure our country. Creating an atmosphere where Americans are calling each other Xenophobes, is irresponsible and only complicates the matter.
Now it is time to have the real conversation. As Presidential candidate Ted Cruz recently said to Fox we are in an "age of appeasement." The duty of the President of the United States is to protect and safeguard American lives, not to champion political correctness.
The President has said the one regret that he had about his presidency is that he didn't do enough about the division that is apparent in our country. The rhetoric that this administration has furthered has only divided us on virtually every level. One place that the Obama administration does believe that America should take the lead is in taking in Syrian refugees. As always their tactics are, if the people don't agree isolate the groups that are against it and ridicule them.
CARTOONS | Tom Stiglich
View Cartoon
One term that has become more than popular among leftists in government and social media is "xenophobia," defined as an intense or irrational fear of those from other countries. However in this case the word does not apply. It is utter lunacy to even suggest it. In Obama's speech in Cuba he sighted that countries like Cuba need to remain sovereign, that is indeed a fair request. However, what of the sovereignty of the country over which Obama himself presides? Shouldn't such sovereignty apply to America?
Words like Xenophobia have no place in the conversation. America should not only vet those coming from the Middle East, or those of Middle Eastern descent. The truth of the matter is that we should not let anyone in from anywhere unless they can be properly vetted. In order to retain our sovereignty we must safeguard our borders not only physically, but also in policy.
The second part of this equation is human intelligence. Recent legislation in cities like New York has made it difficult to gather human intelligence. The push back nationally from the Obama administration from gathering real time human intelligence from Islamic gathering places like Mosques for example, does not make sense. It is not as if those in law enforcement wish to silence or somehow censor the lawful religious practices of Islamic religious leadership. Wouldn't unalienate non-Muslims if the doors to mosques were perceived as open instead of closed. Wouldn't it also strengthen already tense domestic relations between Muslim Americans, and their detractors if Muslims aided in this way.
The third arm of defending America that is under attack by perceived executive authority, is the people's right to bear arms. In the past, it has been widely known to our enemies that America is a dangerous place to fight a war, because of the American people's right to bear arms. Why didn't the San Bernardino shooting that took place in California late last year, take place in  Alaska, Arizona, Arkansas, Kansas, Maine, Vermont, or Wyoming? The answer is that those are all constitutional carry states with gun laws that encourage citizens to responsibly possess and carry firearms.
So long as America is made to apologizing for its place in the world, and the freedoms that it affords its people; we are negating the very things that allowed us in the past to be the great nation we were just a short time ago. While under leadership that does not recognize both our sovereignty, nor the strength and character we possess as a people, we will never defeat our current enemy. We must remain as self-assured and resolute in our way of life as the enemy we see in radical Islam, as we pray for our allies like those in Belgium.