The Giver: A Meaningful Reminder of Freedom's Gift to Mankind 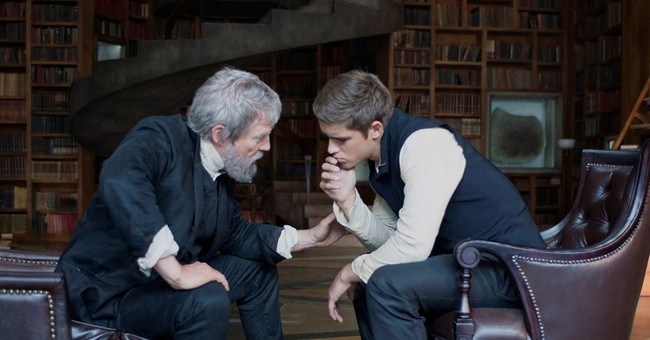 Imagine a world without pain, without joy, without love, without hatred. It sounds like a utopian ideal, but what if this vision came at the expense of the freedom to choose, in pursuit of a society that prioritizes equality of outcomes? It is a question that strikes at the core of a philosophical debate that society has wrestled with throughout time: should government be the sole decider of what is right and what is wrong for its citizenry?

That is the portrait painted in The Giver, a film adaptation of the 1994 Lois Lowry young adult novel of the same title, staring Taylor Swift, Brenton Thwaites, Jeff Bridges, Katie Holmes and Meryl Streep.

The Giver, set in a futuristic totalitarian dystopia, portrays a world in which a government of elders has set out to eliminate all negative human conditions, in the name of creating a society based on “sameness”. Every individual’s path is dictated, and all human emotion and individual characteristics are eliminated.

In this thoughtful and well-executed film, the people living in The Giver’sdystopian community have never known another life. The government, once ruled by the people, has diluted individual rights in order for the state to triumph. This action is done not as a punishment to the populace, but instead to “protect” people from themselves. As Meryl Streep’s protagonist declared, “People are weak. People are selfish. When people have the freedom to choose, they choose wrong.”

Despite the elders’ best intentions, the seeds of “protecting” their populace were planted on a slippery precipice. The Giver points out that totalitarian states are not built overnight. Ideas that start out as universal rallying cries, like eliminating war and poverty, along with propagandized slogans such as “hope” and “change,” can quickly spiral into chaos when leadership does not consider the full breath of its actions.

Just as we see in contemporary times, with closed societies like North Korea, the community members in The Giver have the disadvantage of not knowing an alternative to the life they are being forced to lead. They are conditioned to eliminate comprehension of an alternative world that allows individuals the freedom of choice.

The same is not true for us. It is not just permissible to question leadership in America - it is our duty. The progressive left, however, has replaced that value with one that believes the government can, and must, “care” for people by removing choices. The Giver shows the end game of where progressivism can lead, and provides a stark reminder of all of the liberties that can be lost.

The ancient Greeks believed that human advancement, eudaimonia, should be the center of all ethical concern. Allowing individuals to pursue their own happiness and success was the surest way to lead a full and meaningful life - even if it didn’t end up achieving either. From ancient Greece to the beginning of America, the freedom to fail in pursuit of success, and to live with either consequence, was essential for life to have meaning and happiness.

When government stifles free will, it also crushes the individual potential, intellect, and industry of its people – it denies the opportunity for growth and the freedom to imagine. The daring entrepreneur has no place in a world like this. Much like the film’s hero, Jonas, we must stand and fight for freedom before it is too late.

While modern day progressive ideology can hardly be accused of mimickingThe Giver, this film draws awareness to the dangers of where “the nanny state” can ultimately lead.