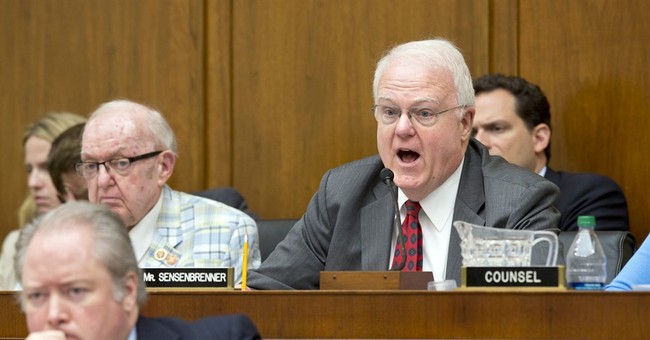 Section 215 of the Patriot Act will not survive another month. The most controversial piece of the post-9/11 law that broadly expanded the federal government's surveillance powers is set to expire on June 1, and the House of Representatives on Wednesday gave its overwhelming approval to a far less sweeping replacement. On a 338-to-88 vote, Republicans and Democrats registered broad support for the USA Freedom Act, which will end the National Security Agency's bulk collection of "metadata" from millions of Americans' phone records.

The legislation faces some opposition in the Senate, where Majority Leader Mitch McConnell is pushing to extend the Patriot Act with no changes. That won't happen. Other Republican senators, including at least two who are running for president, want Section 215 scrapped or curtailed, and the political tides are with them.

Some ardent civil libertarians opposed the Patriot Act from the outset, insisting, somewhat wildly, that it would leave the Bill of Rights in tatters and turn the president into a dictator. Most Americans knew better. In the wake of the terrorist attacks, it seemed only prudent to expand the government's counterintelligence capabilities, and to change the rules that had prevented investigators from "connecting the dots" that could have alerted them to the jihadists' plans. The hysterical alarums about dissenters being rounded up and America turning into a fascist police state gained little traction. For all the controversy they fueled, the law's key provisions — including Section 215 — were extended in 2005, 2010, and 2011.

But as September 11 recedes, the pendulum has shifted from the single-minded focus on counterterrorism and toward a heightened concern with civil liberties.

That shift has been accelerated by Edward Snowden's 2013 revelation of the NSA's metadata program: Until his leaks, almost no one knew that the government was amassing records of nearly every phone call made in the United States — date, time, duration, and number called. The NSA claims its dragnet surveillance is allowed under Section 215. Yet no less an authority than the Patriot Act's principal author, Representative James Sensenbrenner of Wisconsin, has denounced the government's interpretation as abusive. This month a federal appeals court agreed. The NSA's view of the law was "unprecedented and unwarranted," ruled a panel of the US Second Circuit Court in New York. It raises the "potential for invasions of privacy unimaginable in the past," and could not possibly have been what Congress intended.

It wasn't. And Congress isn't about to authorize such sweeps retroactively — one more reason that Section 215 and other parts of the law are being explicitly reined in.

Lawmakers made a point of building sunset clauses into the Patriot Act when they first enacted it a few weeks after 9/11. They knew they were moving quickly, that the enemy's tactics were apt to change over time, and that the war on terrorism, like all wars, would take a toll on truth and civil society. To their credit, they understood that what might seem a wise and necessary enlargement of federal license in the early throes of a crisis might look like dangerous overreach just a few years down the road.

"The natural progress of things is for liberty to yield, and government to gain ground," Thomas Jefferson wrote in 1788. It was true in the 18th century; it is even truer in the 21st, when the government has access to technology of mind-boggling scope and power. By putting expiration dates on the Patriot Act's new surveillance and counterintelligence tools, Congress ensured that debate must continue, and that the balance between safety and freedom could always be recalibrated.

Finding that point of equilibrium is perhaps the thorniest challenge any free nation faces. The preamble to the Constitution juxtaposes the need to "insure domestic tranquility [and] provide for the common defense" with an obligation to "secure the blessings of liberty to ourselves and our posterity." The tension between individual freedom and national security is as old as the American republic.

Yet over time, the pull of freedom has predominated. Even the harshest critics of the Patriot Act would have to agree that by historical standards, the law's infringements were minor. Compared with the repressions of the Alien and Sedition Acts, the internment of Japanese-Americans after Pearl Harbor, the Palmer raids of 1920, or the suspension of habeas corpus during the Lincoln administration, the burdens of the Patriot Act have been relatively slight. Now, even those slight burdens are deemed too costly. Americans may sometimes yield their freedoms, but they don't do so for long.