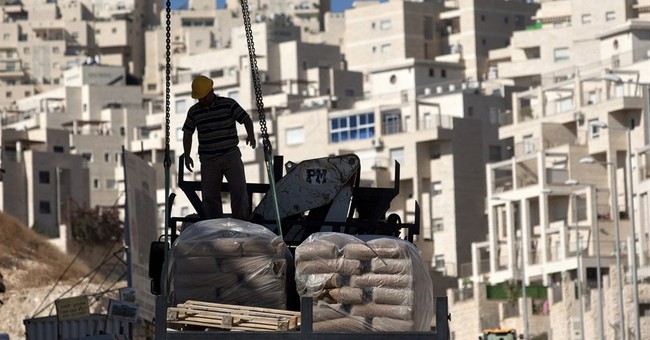 ISRAEL'S RESPONSE to the renewed partnership between the Palestinian Authority and Hamas was admirably, and literally, constructive: It advanced plans to build 1,500 housing units in so-called Jewish "settlements" — i.e., burgeoning Jerusalem neighborhoods and several nearby West Bank communities. The Israeli housing minister, Uri Ariel, described the decision as "an appropriate Zionist response to the establishment of the Palestinian terror government." Hamas and its allies aim at uprooting the Jewish state; Israel's answer is to send those roots down a little deeper.

Anywhere else in the world, new housing construction to accommodate a growing population would be unobjectionable. But normal standards don't apply when it comes to the Middle East. Though the Obama administration decided it could support a Palestinian regime backed by Hamas, a notorious terror organization, it pronounced itself "deeply disappointed" by Israel's plans to construct the new apartments. For his part, Palestinian Authority president Mahmoud Abbas warned that Palestinians would "respond in an unprecedented way to this step." Meaning what? Abbas didn't elaborate. But when the head of the PLO partners with the jihadists of Hamas, it's safe to assume that more violence is in the offing.

Indeed, Hamas issued a fresh call on Monday for "men of resistance in the West Bank" to kill Israeli soldiers and settlers. A few hours earlier, two Qassam rockets were fired from Gaza toward Ashkelon in southern Israel.

Of course Palestinian terror and threats are anything but "unprecedented." So is the canard that peace is somehow undermined by Jewish development of homes and neighborhoods across the Green Line. In the United States, anyone trying to bar Jews — or blacks, or Asians, or Muslims — from moving into a neighborhood because local bigots don't want them there stands a good chance of being prosecuted for violating civil-rights laws. "But in the case of the Palestinians," as George Gilder has written, "we are to take as natural and right their claims to be squeamish about living anywhere near Jews."

After a lifelong pursuit of a Palestine ethnically cleansed of Jews, Abbas knows only how to say no to a Jewish state. When he vows to "respond in an unprecedented way" to the building of additional housing in long-established Israeli settlements, he is really only saying what, in one way or another, he has always said: Jews Out.

Imagine that the president of the Palestinian Authority were to admit that Jews have as much right to live in the Judean Hills or East Jerusalem as Palestinians do.

Imagine that Abbas not only acknowledged the historical fact that Israel's Zionist founders urged Arabs to remain in the new Jewish state in 1948, but sought to emulate their example in a new Palestinian state. Imagine his regarding it as a matter of Arab honor and self-respect that Jews should feel no less safe and comfortable going to work or school in Jenin or Gaza City than Palestinians do in Tel Aviv or Haifa.

To all but a fringe of Israeli Jews, the notion that Arabs should be forcibly excluded from pre-1967 Israel is abhorrent and unthinkable. The expulsion of Jews from a future Palestinian state, on the other hand, is something Abbas and his lieutenants insist on. "In a final resolution, we would not see the presence of a single Israeli – civilian or soldier – on our land," Abbas said last year. Saeb Erekat, the senior Palestinian negotiator, insisted in January: "No settler will be permitted to stay in a Palestinian state, not one, because the settlements are illegal." After promoting that kind of blind rejectionism for so many years, a change of heart by the Palestinian Authority would be more than unprecedented: It would be radically pro-peace.

For what peace requires, above all else, is acceptance by the Palestinians that Jews are not interlopers but neighbors, and that Palestinian aspirations can be fulfilled without the destruction of Jewish aspirations. Mahmoud Abbas — like his mentor Yasser Arafat, like the fanatic haters of Hamas — has spent a lifetime seeking to "liberate" the historic territory of Palestine from any vestige of Jewish sovereignty. If only the Palestinians had a different goal — of sharing that territory with a Jewish state rather than resisting to the bitter end the right of Jews to be there in the first place — what a paradise they could build together.

Eventually that day will come. When it does, the building of homes will be cause for mutual celebration, by Israelis and their Palestinian neighbors alike.