Words to Transform The World 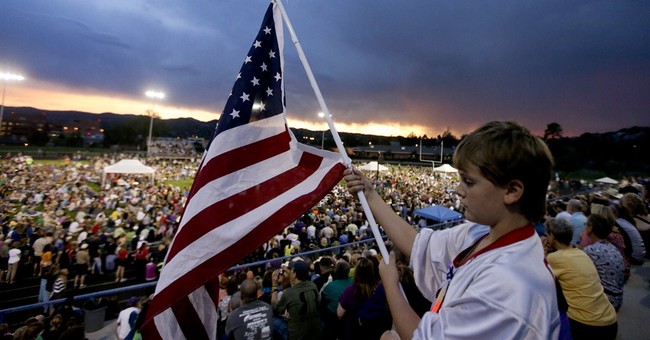 One summer morning in Albany in 1831, two young French noblemen traveling through the United States were awakened by a din of gunfire, artillery explosions, and pealing church bells. It was the Fourth of July in New York's state capital, and the visitors — Alexis de Tocqueville and Gustave de Beaumont — were about to see an American community celebrate the nation's birthday.

In their journals and letters, they wrote of the Independence Day parade, a procession that included political dignitaries, nine companies of firefighters, and a profusion of floats and delegations from all the local trade and professional associations. At the head of the parade rode a few aged Revolutionary War veterans — "whom the city preserves like precious relics," Beaumont observed — and with great pomp was displayed "an old American flag, bullet torn, which has come down from the War of Independence."

The parade ended at the Methodist Church, where the minister offered a prayer and the Declaration of Independence was read aloud. Tocqueville was struck by the "electric" intensity of feeling Jefferson's 55-year-old phrases still evoked.

"This was not, I assure you, a theatrical performance," he wrote to his sister. "There was in the reading of these promises of independence so well kept, in this return of an entire people toward the memories of its birth … something deeply felt and truly great."

Then came the day's keynote address, on the theme of freedom in history and how its success in America would eventually be replicated throughout the globe. The ceremony ended with a hymn to liberty, sung to the tune of the Marseillaise. It too traced the rocky progress of liberty, which had since antiquity repeatedly succumbed to despotism or social decay, until — as the last stanza proclaimed — it flourished in the United States:

In this proud land, where freemen cherish Untrammeled thought and action free, Where tyranny but breathes to perish, Thy chosen home must ever be!

(The Albany celebration is described in Tocqueville in America, George Wilson Pierson's absorbing reconstruction of the Frenchmen's nine-month journey, which eventually led to Tocqueville's classic study, Democracy in America.)

America was the first nation self-consciously founded as the embodiment of an idea — the "self-evident" truth that "all men are created equal" and endowed by God with an "unalienable" right to life and liberty. In a world that had always connected nationhood and citizenship to blood, soil, and ethnicity, the democratic republic born in 1776 presented a prospect that was revolutionary in the profoundest sense imaginable — and Americans from the outset were certain that their model of self-government was destined to radiate outward, shaping the course of human events.

To Tocqueville, this was more than mere patriotic braggadocio. He could see that the world was ultimately going to be transformed by the enlightened doctrines of democratic liberty and individualism. But in America — remarkably — this great transformation had already "been effected with ease and simplicity."

In effect, Tocqueville was making a case for American exceptionalism though that phrase wouldn't be coined until the 1930s. "The emigrants who colonized the shores of America in the beginning of the 17th century somehow separated the democratic principle from all the principles that it had to contend with in the old communities of Europe, and transplanted it alone to the New World," he would write in the introduction to his great work. "It has there been able to spread in perfect freedom."

Tocqueville was an analyst, not a cheerleader. As anyone who reads Democracy in America is frequently reminded, he was well aware of the shortcomings of the American system. ("On entering the House of Representatives at Washington, one is struck by the vulgar demeanor of that great assembly.") But of the enduring force of those ideas adopted unanimously in Philadelphia in 1776, he had little doubt.

Nearly 16 decades after Tocqueville's Fourth of July in Albany, as democratic upheaval was shaking the Iron Curtain, protesters in Branik, an industrial section of Prague, joined a general strike.

"Zdenek Janicek, a brewery worker in grimy overalls, rose on a platform and began to speak," reported The New York Times on Page 1.

"We hold these truths to be self-evident," he said, "that all men are created equal, that they are endowed by their creator with certain unalienable rights, that among these are life, liberty and the pursuit of happiness."

The power of those words to move those who hear them — and to change the world for the better — remains undiminished, 237 years on.