Jeff Davidson
|
Posted: Nov 20, 2020 12:01 AM
Share   Tweet
The opinions expressed by columnists are their own and do not necessarily represent the views of Townhall.com. 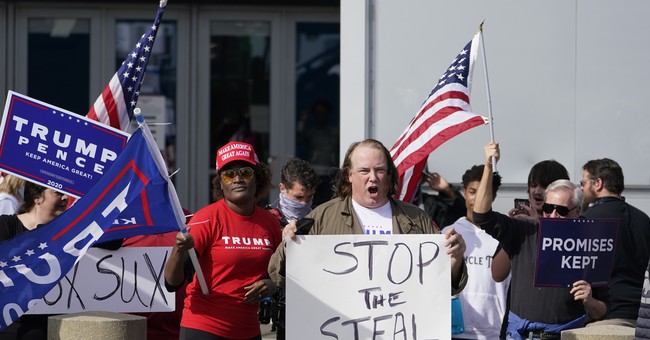 Yesterday was a breakthrough of sorts as Trump campaign lawyers laid out their opening statement at a press conference. They knew full well that the mainstream media machine would twist and contort all that was said. No matter. All Trump voters will soon know that there is light at the end of the horrid Leftist election fraud tunnel.

Let’s face it, since November 3rd, it has been a time of high anxiety for many people who voted for Donald Trump. They saw newspaper headlines and websites ‘news.’ They turned on the TV and even Fox News was letting them down. They were duped by a media machine that pumps out features and articles, around the clock, about ‘president-elect’ Joe Biden.

Everywhere they turned it seems, people were conceding in one way or another that Biden would become the 46th president on January 20th, 2021. And, I'm also referring to die-hard Trump supporters. Many mentally, and in some cases emotionally, were conceding. May I offer an observation, right here and right now? Biden is not going to become president. Stop paying attention to Leftist crap.

In addition to their blatant cheating, the Leftist media machine has perfected the art of psychological operations, “Psyops.” On all levels, at all times, throughout the day, every week of the year, they do their best to wear down their opponents by continuing to present highly slanted articles and features, many of which contain bogus sources, if any. How long can we continue to pay homage to this kind of baloney?

The Left is highly skilled in wearing down presidents, Supreme Court justices, senators, congressional representatives, mayors, state legislators, and so on. One of the most prominent cases was Sandra Day O'Connor, selected by Ronald Reagan as an associate justice of the Supreme Court in 1981 to replace the retiring Potter Stewart.

At the time of her nomination and subsequent approval by the U.S. Senate O'Connor was, by any measure, a staunch Republican with conservative values. In her first nine years as a Justice, she voted with Chief Justice William Rehnquist, more than any of her peers.

When Anthony Kennedy replaced Lewis Powell, and Clarence Thomas replaced Thurgood Marshall, the Supreme Court became more conservative. As such O'Connor became less conservative, often giving liberals the swing vote needed to secure verdicts. And what do you know? Unlike any true conservative ever would be recognized, she received the Presidential Medal of Freedom in 2009 from über-leftist Barack Obama.

What happened to her views? The constant psyops of the Leftist media machine wore her down. By the time retired, she was not merely middle-of-the-road, she was actively agreeing with liberals to the point where true conservatives shuttered.

An Even Bigger Disappointment

More recently, John Roberts, chosen by George W. Bush as Chief Justice, has succumbed to the Leftist psyops, and it happened much faster. Roberts was the deciding vote in allowing Obamacare to proceed. Roberts joined the Supreme Court's four liberal justices (RBG was still alive) in the Nevada church case and the Louisiana abortion case. He also was the swing vote that blocked the repeal of the Deferred Action for Childhood Arrivals program.

In short, Roberts has been a huge disappointment to the conservative rank-and-file: There is no telling what kind of crazy interpretation of cases he will apply.

It's been evident for quite a while that Roberts is an anti-Trumper, and it is questionable as to whether or not he will uphold the law should some of the Democrat election fraud issues make their way to the Supreme Court.

Up until yesterday, I've had conservative friends who were telling me that they were forlorn. They thought that Donald Trump didn't have a chance. They saw some Republican Senators, and others who should have known better, throw in the towel. Ignore these RINOs. Don't let their lack of resolve filter into your consciousness.

It is vital right now that each of us keep the faith, encourage each other to do so, and ensure that the public will, our will, prevails. This means writing letters to the editor of your local newspaper, actively emailing those in positions of authority, calling your representatives, marching to your own state's capital, and visiting legislators.

There are 73.5 million of us. We know that this election was stolen. We will cheer Trump's legal team as they do their work. Meanwhile, we must show our resolve. Now is not the time to concede anything. Indeed, there is no reason to concede anything. We can win. We will win and it will be a glorious day. For now, it is vital that each of us do what we can. Most of all, keep the faith