Turn Out the Lights, the Republican Party is Over

Jeff Crouere
|
Posted: Oct 15, 2016 12:01 AM
Share   Tweet
The opinions expressed by columnists are their own and do not necessarily represent the views of Townhall.com. 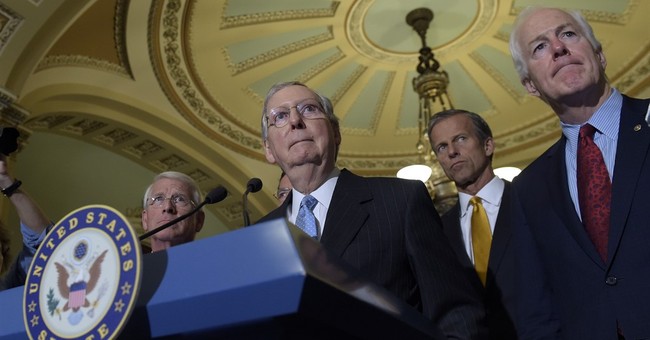 The 2016 election will be remembered as the year the Republican Party ceased to exist as a viable national political organization.

This is the year that an insurgent candidate, Donald Trump, captured the nomination despite the opposition of 16 establishment candidates, their operatives, party leaders, consultants, special interests, major donors and the majority of the “conservative” media.

For a while, there was partial unity as most of the defeated candidates and their supporters endorsed Trump, even Texas Senator Ted Cruz. Yet, after the revelation of a 2005 ‘hot mic” recording of Trump engaging in crude “locker room” sexual banter with Billy Bush, an entertainment reporter, many of these party leaders have abandoned their nominee.

Among this group are Arizona Senator and 2008 GOP presidential nominee John McCain and South Dakota Senator John Thune. In fact, last weekend, there was a stampede of Republicans in Congress, including Congressman Charlie Dent of Pennsylvania, calling on Trump to step aside.

In response, Trump delivered a strong debate performance and solidified his base support. Unfortunately, the momentum was purposely undercut on Monday by House Speaker Paul Ryan, who convened a conference call among house GOP leaders. In the call, Ryan announced he will not campaign for Trump any longer. In effect, he turned his back on the party’s nominee. He told his fellow congressional leaders that they were free to make whatever decision they wanted, but they were under no obligation to support Trump. Reportedly, some of the participants on the call were unhappy by Ryan’s decision. This is indicative to the attitude of many of the GOP grassroots, who have delivered strong support for Trump throughout this campaign.

Trump drew millions of people to the GOP primaries and collected more votes than any Republican presidential candidate in history. Eventually, he won 37 states and four times the number of delegates as his nearest competitor, Ted Cruz.

Since the nomination, he has drawn much bigger crowds than any other Republican presidential candidate since Ronald Reagan. He easily achieved the record number of small dollar donations, even though he started fundraising very late in the process.

Among the rank and file, Trump is very popular. The problem is that among the party elite, there is utter hatred for Trump. He has not been endorsed by 2012 Republican presidential nominee Mitt Romney or by former Presidents George H. W. Bush and George W. Bush. Only 1996 GOP nominee Bob Dole has remained loyal to Trump, although his health does not permit him to campaign for him.

In contrast, the Democrats are a symbol of unity as President Obama, former Vice President Al Gore and even defeated presidential candidate Senator Bernie Sanders have endorsed and are campaigning for Hillary Clinton. None of these people like Hillary, but they are coming together to support their nominee. The Republicans only come together to support a moderate or establishment candidate, but a maverick conservative like Trump has seen almost no support from his party.

This betrayal should not be forgotten by the people who work every day, pay taxes and make this country work. The Main Street Republicans are no longer represented by the Wall Street party brokers.

Paul Ryan and many of these critics say they are working to preserve the Republican majorities in Congress, but these efforts are worthless. As we have seen in the Obama years, a GOP majority in Congress cannot stop a President determined to pursue a liberal agenda.

Under Hillary Clinton as President, a GOP congressional majority will not be able to stop her. Contrary to the vision of our Founding Fathers, there are no longer three co-equal branches of government. The balance of power has shifted to the executive branch and the presidency, especially with a weak and inert Congress afraid to stand on principle.

President Hillary Clinton will be a disaster for our nation and the damage could be irreversible. Unfortunately, Republican leaders are more concerned about protecting their power, perks and relationships than stopping a menace that may destroy what is left of the greatest country on earth.