Jeff Crouere
|
Posted: Jul 30, 2016 12:01 AM
Share   Tweet
The opinions expressed by columnists are their own and do not necessarily represent the views of Townhall.com. 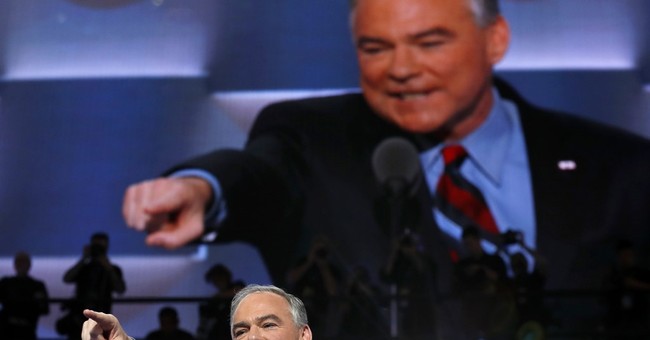 Well, it was a rocky coronation for Hillary Clinton. Although she secured the controversial nomination, her acceptance speech was widely panned, even criticized by Democrat operative David Axelrod. In fact, it was so boring that her husband fell asleep during her 56 minute excursion into political fantasy land.

It remains to be seen what kind of bounce she will receive in the polls. After the GOP finished their convention, Donald Trump secured the lead for the first time in months. Except for the establishment and some die hard Ted Cruz supporters; the Republican Party is united behind Trump as their nominee.

In contrast, the Democrats started their convention in total disarray as the WikiLeaks email bombshell clearly showed the DNC favoritism toward Clinton that Bernie Sanders had complained about during the campaign. The result was that DNC Chairwoman Debbie Wasserman Schultz was forced to announce her resignation as the convention started. She was even booed off the stage at a gathering of Florida delegates.

Many progressives remain rightly furious at the DNC and the Clinton campaign for a rigged process that gave her the nomination. It’s too early to determine how many of these supporters will stay home, vote third party, support Trump or eventually follow the lead of the Vermont Senator and support Clinton.

While the convention concluded under a cloud of criticism, troubling questions about the Democratic Party vice presidential nominee were totally ignored by the liberal media. Last weekend, Clinton made the “safe” choice and selected U.S. Senator Tim Kaine (D-VA) as her running mate. Kaine is considered to be a moderate, as he is on the opposing side from the progressive wing of the party on many issues. Kaine is a staunch supporter of the Trans Pacific Partnership, a hated trade deal that was opposed by Sanders and Donald Trump, and became a major issue in this year’s presidential race.

Kaine is very close to the big banks and financial industry. According to Trump, Kaine is “in the pocket of Wall Street.” Unlike Trump and Sanders, Kaine supported the Iraq War, another issue that will certainly not endear him to the party’s loud progressive wing.

Supporters of Israel should be concerned about Kaine as well. He was one of only eight members of the U.S. Senate to boycott the historic speech of Israeli Prime Minister Benjamin Netanyahu to Congress in March of 2015. He received financial donations from Esam Omeish, a radical Muslim operative who is associated with the terrorist organization the Muslim Brotherhood. Kaine appointed Omeish to the Virginia Immigration Commission even though Omeish is Vice President of a dangerous mosque that was led by terrorist Anwar Al-Awlaki as its Imam and had other terrorists in the congregation including two 9/11 hijackers and Nidal Hasan, who targeted his fellow Fort Hood soldiers, killing 13 and wounding 32, in the 2009 massacre.

To make matters even worse, Kaine claims that he is a “strong supporter of the nuclear agreement with Iran” and said the deal is “a dramatic improvement over the status quo.” This deal is strongly opposed by Israel, which considers it a threat to the country’s survival. Trump and other Republicans have blasted the deal as contrary to American interests, especially since it allowed Iran to access $150 billion in frozen assets.

If elected Vice President, Kaine also promised the Spanish television network Telemundo that he would push a bill to legalize all illegal immigrants during the first 100 days of the new administration.

Another issue which may cause Kaine trouble in battleground states is his staunch opposition to the Second Amendment. He has consistently received an “F” from the NRA. For example, as Governor of Virginia, Kaine vetoed a bill that would have given motorists the right to carry a gun in their vehicles for self-defense.

Even more troubling than his controversial positions, Kaine’s decision to accept lavish gifts while Governor of Virginia may be his Achilles’ heel. Trump has labeled Kaine “corrupt” since he accepted over $201,600 in gifts while serving as Governor of Virginia, according to the Virginia Public Access Project. Interestingly, former Virginia Governor Bob McDonnell was indicted by federal prosecutors for accepting gifts in exchange for political favors.

Some of the gifts Kaine received included an $18,000 Caribbean vacation, $5,500 in clothing, trips to the NCAA basketball Final Four, as well as travel expenses for political events and conferences. These gifts were provided by his political donors, a major pharmaceutical company and the largest electrical provider in Virginia among others.

It certainly seems that Kaine is a typical politician who enjoyed all the benefits of his elected office. This type of “politics as usual” attitude is exactly what millions of American voters are tired of tolerating. It is one of many motivating factors that will drive turnout among the electorate this November.

Kaine and his running mate are both old school Democrats who take advantage of perks and bend the law to their advantage. Both of them have been in politics for decades and in this change election, they are clearly on the wrong side of history.