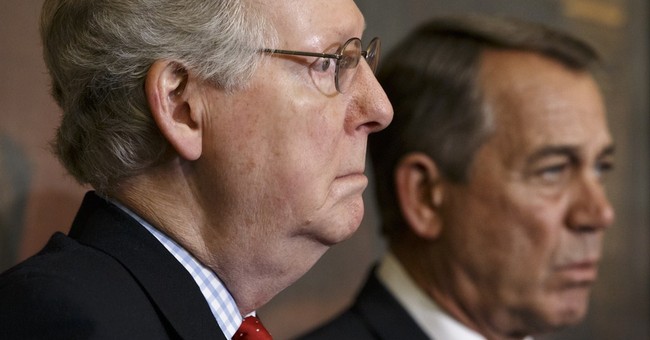 A new Pew Research Center poll shows that America is unhappy with the GOP led Congress. In fact, Americans are disgusted as Republican congressional leaders only registered a 22% overall approval rating.

What is especially significant is that the poll shows this anger is bipartisan. Only 41% of Republicans approve of the performance of the GOP congressional leadership. This is much lower than the 60% approval rating GOP leaders received in 2011 and the 78% approval rating they received from Republicans in 1995, months after the party took control of Congress for the first time in 40 years.

There is a major difference between the congressional leaders of today and those at the helm in 1995. During that era, Newt Gingrich was Speaker of the House. In the November 1994 elections, Americans sent Republicans to Congress with a mission, enact the Contract with America. Led by Gingrich, the Congress was actually able to get some tangible goals accomplished by moving then-President Bill Clinton to the right. As a result, Clinton signed into law bills that lowered capital gains taxes and established welfare reform. Even more miraculous, a significant budget surplus was created.

Gingrich was an unabashed conservative, who truly believed in the concepts of lower taxes and less government. Unfortunately, however, today the GOP leadership in Congress, specifically Senate Majority Leader Mitch McConnell and House Speaker John Boehner, are typical establishment Republicans who have been on Capitol Hill too long. They are opposed to the Tea Party and true conservatives and have no interest in real reform or following the wishes of grassroots Republicans.

Just four months after the Republicans took control of the Senate and House, most of the GOP electorate has lost faith in congressional leadership. It is no surprise since nothing has been accomplished except the Keystone Pipeline bill, which President Obama vetoed, and the House-passed bill ending abortions after the 20th week of pregnancy. On almost everything else, there has been rhetoric, but no action.

Despite the fact that almost every Republican congressional candidate campaigned against Obamacare and the President’s executive amnesty for five million illegal aliens, Congress voted to fund both programs. The Senate approved the radical nomination of Loretta Lynch as Attorney General and just gave Obama a major victory by approving legislation giving him more power to enact trade deals.

This trade promotion authority would force Congress to accept the upcoming Trans-Pacific Partnership between the United States and 11 other nations without any amendments. It would require Congress to schedule an up or down vote on the trade pact, creating “fast track” legislation. Many conservatives are leery of any trade deal that gives the President more power and might lead to the further dissolution of American manufacturing jobs. Both Boehner and McConnell are supportive of this agreement, which critics label as another gift to big business at the expense of middle class America.

After passing a trade deal, McConnell will turn to renewing the Patriot Act, despite major NSA abuses and a significant invasion of the privacy of ordinary Americans. It is another issue that pits GOP leadership against the majority of Republicans.

Clearly, congressional Republicans are not advancing a conservative agenda or stopping President Obama. This betrayal of conservatism is reflected in the Pew poll. The stage is now set for the 2016 presidential race where true conservative candidates will be facing establishment-backed candidates like former Florida Governor Jeb Bush.

If an establishment Republican is nominated, millions of conservatives will be disgusted and will bid farewell to the GOP. This will insure that the Republican Party, which has lost the popular vote in 5 out of the last 6 presidential elections, will lose again.