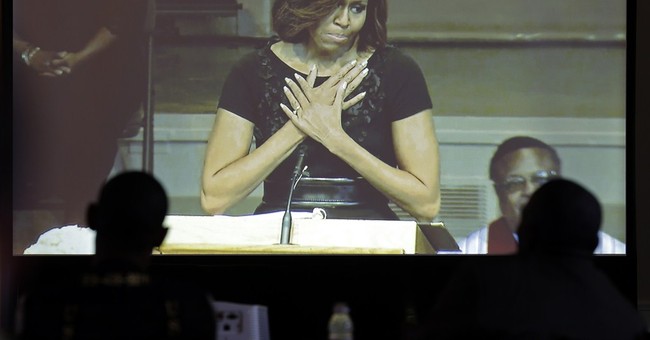 Due to the 22nd amendment to the U.S. Constitution, Barack Obama is barred from serving a third presidential term. This is a godsend since our country may not survive another four years of President Obama. Fortunately, more Americans are realizing the damage he has done to our country. This explains why his approval numbers are mired in the low 40's and the prospects for the Democrat Party in the mid-term elections are not very rosy.

Despite Barack Obama's disastrous record as President, there are many Democrat Party leaders in his adopted home state in Illinois who are longing for his wife to run for the U.S. Senate in 2016. They point to a 2012 Public Polling Policy survey which showed Michelle Obama leading incumbent U.S. Senator Mark Kirk (R-IL) by a comfortable 51-40% margin.

Clearly, the First Lady is not a shrinking violet. She has cultivated the media spotlight since her husband's election; however, her public profile has recently reached a new level. Last month, she traveled to China on a mission that drew international attention. She has also launched a Twitter campaign to rescue the Nigerian school girls kidnapped by the Islamic terrorist group Boko Haram.

From the very beginning of her tenure as First Lady, she has been trying to revamp school lunches and combat childhood obesity. Because of her active involvement, Congress passed legislation mandating “healthier” school menus, despite opposition from youngsters who disliked the new menu and Republicans who objected to enhanced federal involvement. In fact, Republicans are now considering a bill to adjust the new school menus. In Mrs. Obama's view, these efforts amount to a “roll back” of progress. In a recent New York Times editorial, the First Lady claimed that Republicans are trying to “override science.”

By engaging her political opponents in a high profile manner, Mrs. Obama is entering a more combative phase. It seems she has an increasing interest in debating Republicans, possibly signaling an interest in running as a candidate for public office.

Publicly, the President and Mrs. Obama do not acknowledge any interest in a political career for the First Lady. However, it is clear that there is a precedent for a First Lady winning political office with the help of her husband. Hillary Clinton was elected U.S. Senator for New York, even though she did not live in the state. She also served as Secretary of State and was a serious presidential candidate in 2008. Much of this success was due to one reason, she served as First Lady. It is quite possible that Michelle Obama harbors the same type of ambitions and feels she is just as qualified as Mrs. Clinton.

If Michelle Obama does not run in Illinois, Kirk will probably be re-elected. In a U.S. Senate with a very close margin between the two parties, the pressure on Mrs. Obama to become a candidate will intensify.

If she enters the race for U.S. Senate as First Lady, it will be a tremendous advantage for Michelle Obama. She could raise millions of dollars from liberals nationwide, while the media will fawn all over her.

Sadly, she shares the same poisonous liberal philosophy as her husband. She is a true believer, who sat in the pews of the Trinity United Church of Christ as Reverend Jeremiah Wright spewed his racist, anti-American sermons.

She believes the government should play a larger role in our lives from dictating lunch menus to mandating healthcare services.

Michelle Obama has spent the last five years traveling the world on the taxpayer's dime. She enjoys first class resorts and five star hotels. Serving as a member of the world's most exclusive club would undoubtedly be appealing.