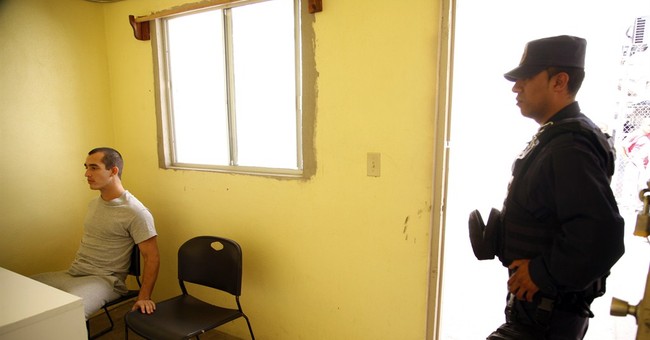 Since March 31, a United States Marine has been in custody in a Mexican prison. Sergeant Andrew Tahmooressi was detained after making a wrong turn near the Mexican border. He told the Mexican police that there was no way to make a U-turn on the road he was traveling, thus he entered Mexican territory by mistake.

At the time of his arrest, Tahmooressi was in possession of three legally registered guns. The guns were safely stored in his truck, so the Marine was no reckless lawbreaker trying to commit crimes in Mexico. Tahmooressi told the Mexican authorities about the guns and followed their instructions. His polite cooperation was ignored by a Mexican military official, who seemed intent on bringing the Marine to prison. According to Tahmooressi, the officer made a calculation that “three guns…equals prison.”

A Marine entering Mexican territory by mistake should be allowed to immediately return to the United States, no questions asked. Sadly, he was arrested, subjected to regular beatings, verbally harassed and even chained to his bed. Eventually, he may be used as a bargaining chip by the Mexican government.

Right after his arrest, Tahmooressi was frantic and worried that he “would be raped and killed.” He tried to escape, but was caught and then tortured. He was hit until he his jaw was dislocated and punched in the stomach until he was “gasping for air.” He was also stepped on, stripped naked, and immobilized.

The treatment was so harsh; Tahmooressi began to worry about his loved ones and was truly “afraid for my family.” Eventually, the media picked up on the case and this attention has forced Mexican authorities to stop their barbaric treatment.

It is outrageous that one of our heroes is undergoing this type of unacceptable detention and abuse. His only crime was making a wrong turn, not trying to enter Mexico illegally.

It is quite a contrast to see how Mexico handles Americans who enter their country illegally versus how we treat Mexican illegal immigrants. While our Marine is being brutalized, millions of illegal aliens from Mexico receive government benefits and are able to secure employment. They are not tortured, they are rewarded. In fact, with the President’s unilateral adoption of the Dream Act, youngsters from Mexico who illegally enter the country never have to worry about being deported.

After such as infuriating incident, it is imperative that President Obama takes action. At a minimum, the President should call Mexican President Enrique Pena Nieto and demand that Tahmooressi be released within the hour. We have plenty of leverage with Mexico. For instance, Obama could threaten to complete the border fence if Tahmooressi is not released. He could also threaten to start immediately deporting all illegal immigrants from Mexico. This would devastate Mexico’s economy, which depends on their illegal immigrants sending billions of dollars back home to family members.

Instead of taking tough steps to solve the problem, sadly, it seems that President Obama is unconcerned with the issue. While Secretary of State John Kerry has commented, President Obama has been silent. In fact, as in the VA scandal, he may claim that he only learned about the incident on the news. To generate a presidential response, Tahmooressi’s mother started a petition on the White House website calling for her son’s release. It has already generated over 85,000 signatures in less than a month.

The total lack of urgency is unacceptable. Until our Marine is safely returned to our country, relations with Mexico should be strained to say the least. A real superpower would not allow one of its soldiers to be improperly detained. If we are still a world superpower, it is time we started acting like one.