Where Is The Inflation?

The Consumer Price Index was released this morning. It was up slightly.

Some are mystified by the economic results of the expansionary Federal Reserve policy. The Fed is working to try and get inflation started, but it doesn’t come. There is no inflation in the economy yet. The reason, money isn’t turning over. It’s being created by the Fed and it gets stuck into the banking system. Banks aren’t lending because they increased their requirements for lending after the financial crisis, and after the passage of Dodd-Frank. Additionally, because of all the uncertainty and poor tax incentives, business isn’t expanding. So demand for cash isn’t there.

Those of us that are old enough remember the late 1970's well. Gerald Ford not only lost the 1976 Presidential election because of a debate gaffe and Watergate. He also lost because of a bad economy. Anyone remember his “Whip Inflation Now” button? 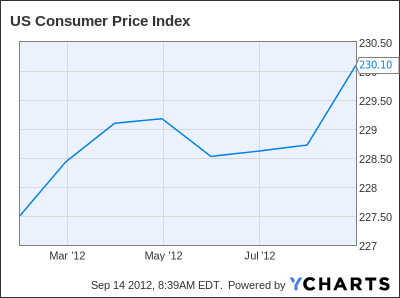 No doubt, prices are headed higher. It’s not just QE3. That will certainly send commodity prices higher. But since we have had one of the poorest corn crops in the last twenty years, prices of all goods are going up. Corn is in a lot of products that don’t necessarily look like corn. But, next year, the corn crop could be great and the price increase will subside.

Oil prices will go to the high fours and possibly breach the five dollar a gallon ceiling. Oil has quietly crept over $100 per barrel on the Fed action and the unrest in the Middle East. If it’s true that Israel is running out of time on Iran, then any $140/bbl calls you buy will be worth a lot of money soon!

What I fear isn’t that type of inflation though. Because it’s event driven. As soon as events subside, prices change. The largest fear I have is that the Fed has expanded it’s balance sheet to such a level that when true economic expansionary inflation cracks the market, the Fed will not be able to retrieve the cash its created fast enough to stop 1970's style inflation from happening. They are always behind the curve to a degree.

What if we get a solid change in government and transfer from the Keynesians running the show now to a pragmatic government that actually creates an expansionary fiscal policy? The amount of cash lying around could actually hinder a strong recovery rather than create it.

Because of the way Keynesians look at the economy, they score decreases in government spending as net subtractions from GDP. They are wrong. When governments contract with a corresponding decrease in tax rates to incentivize private growth, economic development booms. There is more room for private sector borrowing.

We are in very tricky economic times. What we have done over since 2008 has failed miserably. Yesterday’s action by the Fed was another Hail Mary. Only changing the coach will change the strategy.