Why QE3? Because Bernanke Says 25 Million Unemployed is a Tragedy

Jeff Carter
|
Posted: Sep 02, 2012 12:01 AM
Share   Tweet
Trending
Fed Chairman Ben Bernanke said that the Fed would probably engage in another quantitative ease. This is the third time since 2009 that the Fed has engaged in a radical maneuver to stimulate growth in the economy.

Except it never works. All it does is devalue the money that you have, and artificially inflate the prices of hard assets you own.

Chump reporters yesterday parroted the, “Dow Jones Industrial Average was up on the news yesterday by 90 points.”, without thinking about why. The reality is the Fed is out of bullets and yesterday’s announcement will do nothing to stimulate the economy. If you haven’t been watching, Japan has engaged in continuous quantitative easing since the 1990's. They call it the lost decade over there but it’s more like the lost economy.

In a quantitative ease, the Fed buys US Treasury Debt of different expirations and injects actual cash into the economy. Banks that hold the treasuries sell them to the Fed, and receive the cash. Ideally, the banks will turn and lend that money out to businesses at a low interest rate.

The problem with the strategy is there is no economic growth in the broad economy. The Fed is fighting massive headwinds out of its control. China is in trouble and we all know about the European situation. So businesses don’t demand the cash from the banks, and the banks simply reinvest the cash in the US Treasury market. There is no velocity of money turning over through the economy.

But here are some real world effects when the Fed announces a policy like this. Some markets ignore supply and demand fundamentals because of the devalued dollar. For example, prior to the announcement the December Lean Hog contract ($HE_F) was trading around 71.05. It was trending lower on the day, and that makes sense because farmers are responding to the drought by culling hog herds and sending a lot of them to market for slaughter. But the end of the day, the hogs rallied 100 points. Pure QE effect.

Another market people like to look at is gold. ($GLD, $GC_F). Yesterday post announcement gold rallied hard. Over 45,000 futures traded at CME. ($CME). The stock market had huge volume yesterday after being lethargic for most of the month. E-mini S&P futures ($SPY, $ES_F) traded over 2M contracts. That’s $100 billion in notional value. 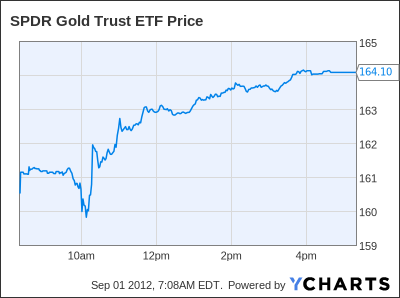 Quantitative ease will do nothing to help anyone in the US without a job. No business is going to hire because the Fed is buying back debt and creating excess cash. Without real prospects for growth, business doesn’t have an incentive to expand.

Bernanke is quoted as saying that “the benefits of QE outweigh the costs”. He is wrong. He also made the observation that there hasn’t been any inflation caused because of previous QE’s. He is right about that. The reason there is no inflation in the US economy today after all the monetary stimulus the Fed has engaged in over the past three years is that there is no economic growth. GDP is flatlining. If we had real growth, we’d have inflation because the velocity of money would flow through the economy.

There is no benefit to quantitative ease except you feel richer than you really are. When looking at the costs, the Fed also needs to total up all the damage that it has wreaked on retirees that are living on a fixed income. Most of them have investments tied to an interest rate instrument and have been devastated by Fed action over the past several years. The other people that are hurt are savers. People sitting on cash in checking and savings accounts. Their cash suddenly got worth less than it was yesterday.

The Fed is out of bullets. The only thing that can stimulate this economy is a change in fiscal policy. A fiscal policy change, can cause a change in economic equations businesses use to calculate the difference between expanding and doing nothing. Obama and his administration have regulated business to such a high extent, they choose not to grow. Many choose to go out of business instead of bearing the brunt of higher regulation.

The last three years we have used Sesame Street economics to solve some very tough problems and everything has been an abject failure. That is a crying shame. Milley Details Nancy Pelosi's Attempt to Take Over the Chain-of-Command
Townhall
Jen Psaki reiterates that Joe Biden never said that thing that he said *on video* about withdrawing troops from Afghanistan
Twitchy
Woman Who Started the Fawn Fire Is the Poster Child for Gavin Newsom's California
Redstate
Insanity Wrap: Jen Psaki Is the Stupidest Person in the World (Or Hopes You Are)
PJ Media